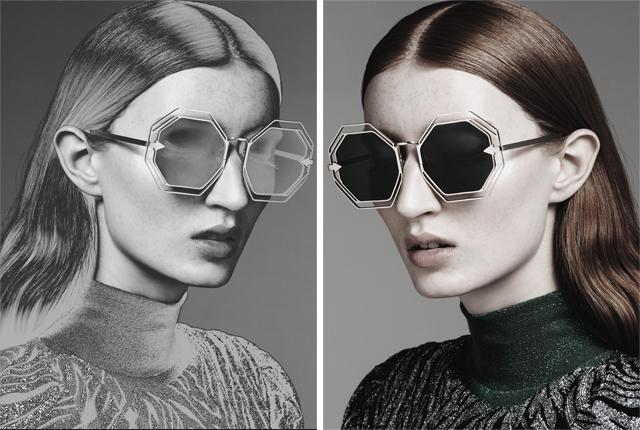 Man Ray is known for reinventing the technique of solarization during the Thirties, which involves reversing the tones of an image recorded as a negative so that dark areas appear light and vice versa, creating a metallic effect.

A longtime fan of the photographer, Walker decided to use metal as a starting point, both for the label’s new collection and for the accompanying campaign imagery.

“I’ve always had Ray’s work on my pin-up board. I especially love his solarized portrait for Lee Miller. It’s a simple composition but full of contrasts; the real world versus a solarized one,” said Walker. “Using the idea of metals we wanted to take the shapes back to an architectural level and execute them almost skeletally.”

The range, which includes signature shapes such as round frames, the brand’s playful octagonal-shaped frames and a new aviator style, are reworked using gold, silver and bright blue Monel metal frames.

Walker also experimented with high-quality reflective lenses by optical manufacturer Zeiss, as well as with air-cushioned nose pads for the first time, when creating the “Metals” range.

“Focusing on the metal creates a different design approach because you are limited in terms of the colors and so many things that you can do. That’s why we looked into it from an engineering point of view. Using Zeiss lenses and Monel metals meant that technically the frames have gone to a new place that we haven’t been able to go to when just using acetate,” added the designer.

Taking its cue from the collection’s focus on metal finishes, the accompanying campaign imagery – shot by London-based photographer Barnaby Roper and featuring British model Hazel Townsed – offers a contemporary interpretation of Man Ray’s solarization technique. A series of portraits featuring Townsed in the new range are created in both positive and negative exposures and set against each other.

“We wanted to capture Ray’s solarization in 2016 and create something that felt very polished and crafted, which talks back to the product because the product for this season is so much about the craft and the structure,” explained Walker.

Walker has always been known to create unusual campaign images. Most recently, the brand partnered with Ari Seth Cohen of the popular blog Advance Style to create “Magic Hands,” a campaign of its latest ring collection shot on the hands of elderly women.

“A campaign concept has got to be fun and new and fresh and it should make the hairs on the back of your neck stand up when you create it. We don’t have a big corporate company with a 15-page document around how the campaign needs to be perceived, so we can be very nimble and creative,” added the designer.

All sunglasses are priced at $365 and will be stocked on the label’s website, as well as at the brand’s key retail partners including Barneys New York, Nordstrom, Saks Fifth Avenue and Net-a-Porter.com.

The company is also working on two more ranges within eyewear, as well as its fifth fragrance, set to launch at the beginning of next year.