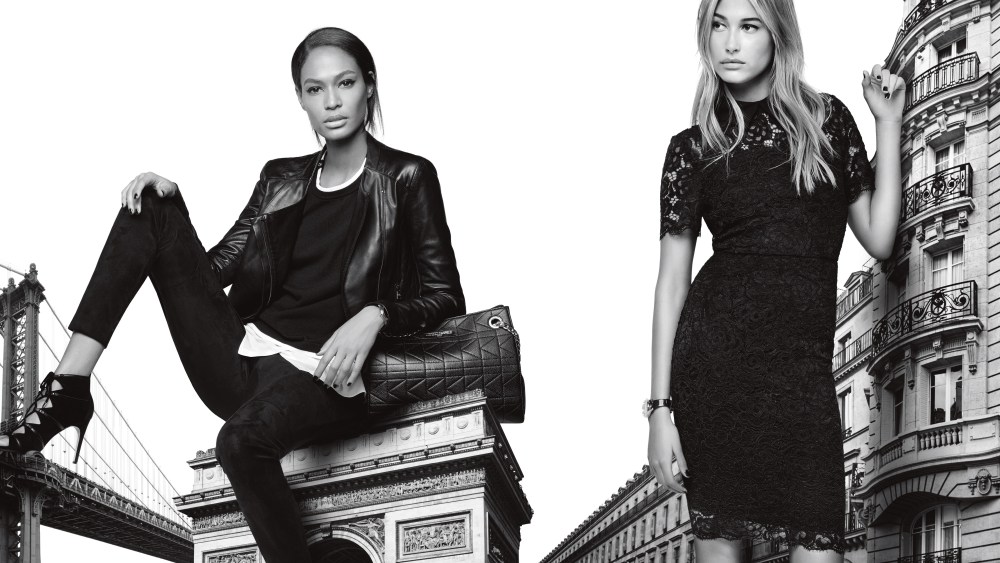 A TALE OF TWO CITIES: The Arc de Triomphe makes a dramatic settee for model Joan Smalls, while the Eiffel Tower looms behind Hailey Baldwin as she straddles the Pont Neuf.

Via deft photo montages, Karl Lagerfeld opted to make Parisian landmarks, along with a few New York ones, the costars of his first campaign for the Karl Lagerfeld Paris line, which joint venture partner G-III Apparel Group Ltd. is launching this fall.

“For a designer, it’s great to work with the girls of the moment because not only clothes express our times, but girls, too,” the designer says in a teaser video on the new karllagerfeldparis.com web site.

Print ads are breaking in September issues of magazines including Vanity Fair, Harper’s Bazaar, Elle and Vogue, while the full digital campaign is to go live on Sept. 7. The fashion house is plotting display and banner ads on key fashion sites for both mobile and desktop, in tandem with a social media campaign from its @karllagerfeld accounts.

The Karl Lagerfeld Paris collection has already been delivered to 285 doors of Lord & Taylor, Dillard’s and Hudson’s Bay. The range is also sold in Mexico at Liverpool and on the brand’s web site.

The made-for-American range includes logo T-shirts for $39.50, a short-sleeve lace dress for $145, a quilted lamb leather shoulder bag for $228 and a studded nylon messenger for $158.

G-III Apparel holds a 19 percent stake in Karl Lagerfeld Group BV and is behind the German designer’s push into North America in the burgeoning “affordable luxury” category.

Morris Goldfarb, chairman, president and chief executive officer of G-III, has said the Lagerfeld business has the potential within five years to be a $300 million to $400 million business at wholesale.

Under the joint venture agreement, G-III acquired a 49 percent interest and became Lagerfeld’s first licensee, securing a renewable five-year pact for the initial categories. The deal covers all consumer products and apparel in the U.S. and Canada, excepting those held by Karl Lagerfeld Group: eyewear, fragrance, watches, jewelry and hospitality services. It also grants an exclusive, royalty-free license to use the trademarks in Mexico for the same products.