PARIS — “Paris loves you. You are Paris,” declared the French capital’s mayor, Anne Hidalgo, as she honored Karl Lagerfeld on Tuesday with a Grand Vermeil medal, the highest distinction the city can offer.

Hidalgo was standing under a replica Eiffel Tower in the Grand Palais, moments after the end of the German designer’s fall haute couture show for Chanel, which drew a standing ovation from guests including Kristen Stewart, Julianne Moore, Tilda Swinton, Katy Perry and Cara Delevingne.

“Thank you, because your imagination is without limits. It is extraordinary. I would not have dared to build the Eiffel Tower in the Grand Palais and you did it, because your genius allows you to be daring and to make things beautiful and to transport us to a universe in which you excel,” Hidalgo said.

“Your talent is recognized all over the planet, but you are also someone who has made Paris even more magical, creative and beautiful. You are a Parisian, a true Parisian, who delivers the best of Paris,” she added. “Thank you from the bottom of my heart.” 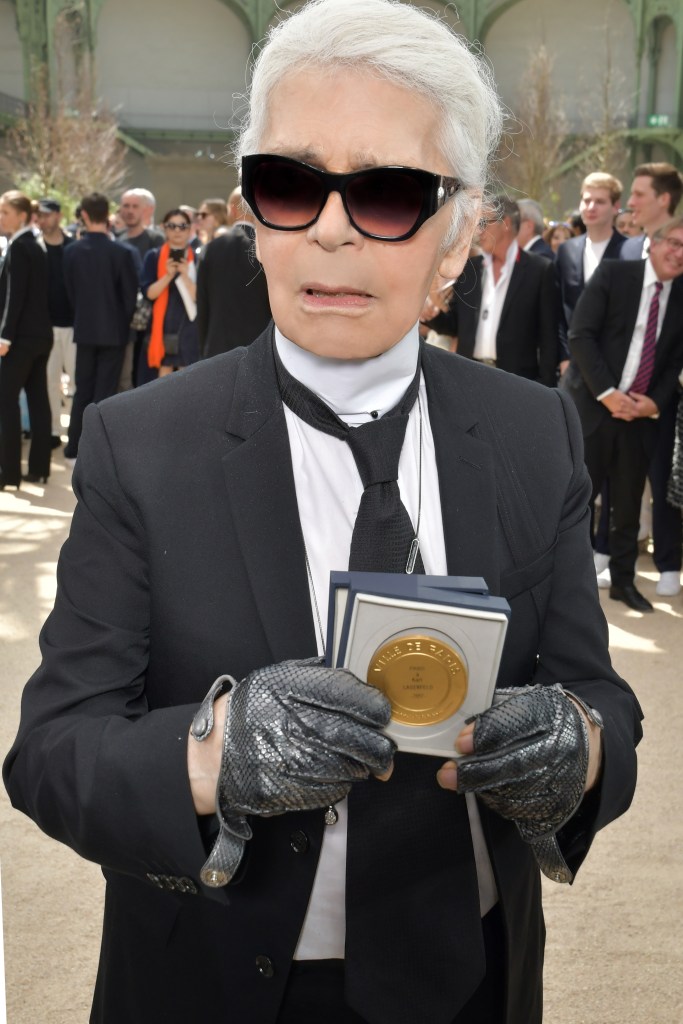 Lagerfeld and Chanel have pulled out the stops in the last year to bring high-spending visitors and international press back to Paris, staging six shows in a row in the French capital. That includes the recent cruise show in May, reaffirming Lagerfeld’s attachment to the city and its importance for fashion.

“I am a foreigner and I am attached to being a foreigner, because foreigners have a different outlook on Paris and on France,” said Lagerfeld, noting that the city is basking in renewed optimism since the election of French President Emmanuel Macron in May.

“With the recent changes, you get the feeling that the sun is rising on France. Everyone is in love with Paris and France again. People want to be here and for French to become the fashionable language again, and I think it’s terrific,” the designer said.

“And when you’re not French, you see this without any nationalism or patriotism. It doesn’t concern me,” he added. “Vive la France, and the Paris bid for the 2024 Olympics!”

In December, Lagerfeld and Chanel took over the Ritz Paris and staged three shows for the Métiers d’Art collection, a pre-fall range of ready-to-wear embellished by the specialty couture ateliers that Chanel owns. The designer dubbed it “Paris Cosmopolite” to evoke a time when elegant women from the world over converged on the mythic Place Vendôme hotel, established in 1898.

The Rue Cambon house has been a pioneer in staging itinerant shows and has taken its cruise collection as far afield as Seoul and Havana and its Métiers d’Art collection to Dallas, Edinburgh and Salzburg. Lagerfeld typically uses each destination to exalt a facet of the house’s lore — or to invent a new chapter.

But Paris remains a key font of inspiration for the designer, whose Métiers d’Art effort for Chanel in December 2015 was themed “Paris in Rome.” Staged at Cinecittà film studio No. 5, it boasted a transporting black-and-white streetscape that elicited a strong emotional tug as the show fell only weeks after the deadly terror attacks in cafés and concert halls that sent Paris reeling, spooking tourists.

Last fall, Hidalgo hosted a lunch for top editors during fashion week and solicited suggestions to lure visitors back. Among the ideas was for French houses to scale back destination shows and bring their elite audience of press and clients to Paris.

Lagerfeld was awarded the Legion of Honor, France’s highest civilian distinction, in 2010.