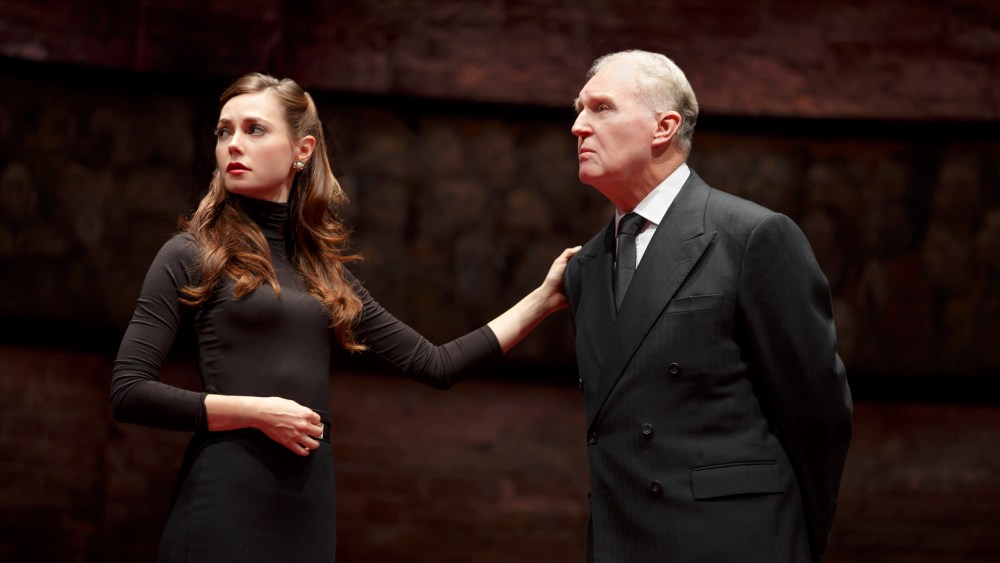 “I was on the tube and someone was like, ‘What do you think about Kate’s bangs?’”

A common question to ask fellow riders on London’s transport, perhaps, but an even more appropriate inquiry for Lydia Wilson, the 31-year-old English actress who portrays the Kate in question — Kate Middleton — in Broadway’s newest play, “King Charles III.”

Opening on Nov. 1 after a blockbuster run in the West End that culminated with an Olivier Award for Best New Play, “King Charles III” arrives at the Music Box Theatre as interest in the Duchess and Duke of Cambridge is at a fever pitch following the birth of daughter Charlotte Elizabeth. It marks the first time a playwright has attempted to dramatize the young royals’ inner lives.

“We [may] know that she has a fringe right now,” Wilson continues. “But we don’t know how she feels existentially as an outsider in this bizarre royal family. It’s really fun to imagine what she might be going through or how clever she must’ve been to thrive in this very restricted environment.”

Written in iambic pentameter by Mike Bartlett, whose 2010 play “Cock” also won an Olivier, this imagining of the royals we seemingly know well spins the concept on its head, opening at a time in the future, when Queen Elizabeth has died and Charles is in line to be crowned king. There are tanks outside Buckingham Palace, the ghost of Diana lingers in the halls, and there is one Duchess Catherine organizing a coup within the palace.

Wilson’s portrayal of Kate does away with any timid girlishness. In “King Charles III,” Kate is the backbone to Will, a role Wilson embodies with humor and edge. “Pairing this mystery with the really, really known figure, there’s a dramatic power that comes from that,” the actress says.

Though satirical and sharply humorous, one of the play’s strongest themes is questioning the place of monarchy in a modern society. “Class is such a sensitive and neurotic and insane and hysterical thing in England,” Wilson says. Her Middleton is at the center of the discussion, as a royal by marriage and not birth. “She’s not aristocracy,” Wilson says. “Her accent sounds almost like the rest of the royal family, but there’s more muscularity and precision in it because it’s not in her DNA.”

Accent became one of Wilson’s most effective tools in her portrayal. “There’s this interview with her and Wills, and they’ve just announced their engagement, and she’s shy and just learning the ropes but she’s brilliant in it,” Wilson says. “I copy her in it. I run through it every night. With Kate, those external things, particularly voice and gesture, those are really my way in.”

Wilson was raised in North London — her father is English and her mother grew up in New York’s West Village — and studied English literature at Cambridge before graduating from the Royal Academy of Dramatic Art in London in 2009. Before she was cast, Wilson was one of those rare individuals who didn’t pay much attention to the Duchess, but now feels sympathetic.

“She must be up at the crack of dawn, in a job that leaves very little room for your inner life,” Wilson says. “Whereas my life has been sort of a disproportionate focus on my inner life, because I’m trained as an actor. I’m allowed to express and explore, whereas with Kate I think the biggest thing is the sacrifice of that conversation.”

The royal family has yet to comment on the production but a member of the staff attended a performance and even notified the crew of an inaccuracy — Charles, in real life, does not wear a wedding band, which was then adjusted in costuming the actor who portrays him, Tim Pigott-Smith.

Next summer, audiences will see Wilson shed of her Middleton sheath dress and in futuristic settings of a different kind: she’s just wrapped the latest Star Trek film, “Star Trek Beyond.”

Wilson was drawn to the role, admittedly somewhat unconsciously, by the similar narrative she later identified in the two characters: “There’s a theme of coming-of-age and a woman finding her voice, and using the fact that she’s considered not a threat because of her girlishness,” she says.