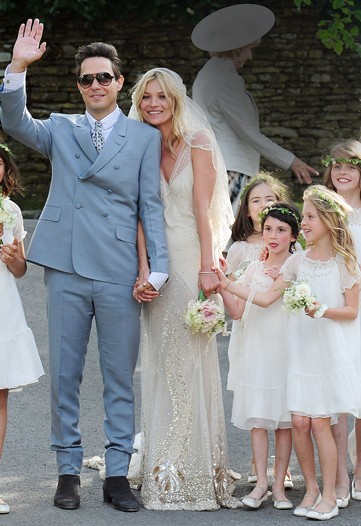 Kate Moss wore a dress designed by long-time friend John Galliano on Friday for her wedding to Jamie Hince, WWD has learned. The groom wore a suit by Yves Saint Laurent. The ceremony took place at St. Peter’s Church in Southrop, England, followed by a reception to be held at Moss’ estate in the Cotswolds.

According to industry sources, the wedding dress that Galliano designed for Moss was inspired by Zelda Fitzgerald, whose engagement ring she is wearing. He did the final fitting for the dress earlier this week in Europe, while in care.

“Kate is his biggest muse and he was never, ever going to let his friend down,” said one source. “He did Kate’s 21st birthday dress, her 30th birthday dress, and Galliano’s show was the first she ever walked for. So this wedding day ties up a lot of things beautifully.”

The slinky Galliano number Moss chose for the ceremony was only the tip of the model’s sartorial iceberg. Stella McCartney designed a series of outfits for the great Moss wedding weekend, including the model’s first-dance dress which is in oyster silk chiffon with a diamond-shape, chain embroidered bodice and cut-out back. McCartney also designed her party dress — which Moss will wear after the first dance tonight. That dress is a mini with micro bugle beads and a plunging back. McCartney even created the going-away outfit, a three-piece suit with a single-breasted, grosgrain peak lapel jacket and a wide-leg trouser. The suit is made from alabaster off-white wool.

And if all that wasn’t keeping McCartney and her team up at night, the designer also whipped up three of the bridesmaids’ dresses. Two were in oyster-colored washed silk chiffon, bias cut with a soft ruffle at the shoulders while the third came in dusty antique blue.