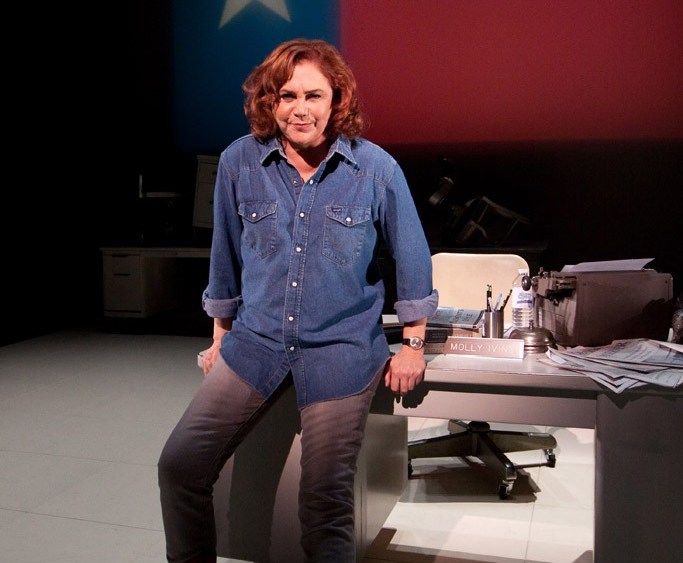 WASHINGTON — “Yikes,” says Kathleen Turner, flashing a wicked grin reminiscent of her days as an Eighties screen sensation in “Body Heat,” “Romancing the Stone” and “The War of the Roses.”

She’s reminded of her comment, coming off her critically acclaimed run in Edward Albee’s “Who’s Afraid of Virginia Woolf” in 2005, that she had spent her life fixing Elizabeth Taylor’s roles. “That was very cocky of me, wasn’t it?” she says. “I was thinking of ‘Cat on a Hot Tin Roof,’ you know, and ‘Virginia Woolf.’ I think she butchered those roles.”

Turner, 58, is midway through a two-month D.C. run starring in “Red Hot Patriot: The Kick-Ass Wit of Molly Ivins,’’ a one-woman show at Arena Stage about the liberal Texas reporter who famously dubbed President George W. Bush “shrub.” Turner keeps her audience laughing in her portrayal of the firebrand humorist who battled alcohol, fought with her father, died of breast cancer and, for many of her peers, came to represent print journalism at its grassroots finest. Eight shows a week, her fans celebrate each performance on their feet, laughing, clapping and saluting the days when politicians really cared what syndicated columnists wrote.

Halfway through September, the show broke $1 million, during a month when Arena is usually empty. Now it is virtually sold out through Oct. 28, when Turner moves on to work on a new project directing and starring in a revival of “The Killing of Sister George,” scheduled to open Nov. 28 at the Long Wharf Theatre in New Haven.

“Everyone at Arena is extremely happy,” says Turner, blonde hair flowing as she strides across the living room of her trendy, temporary, D.C. digs, chatting breezily on the telephone with her best friend and ex-husband, Jay Weiss. “They gave me dozens of red roses to celebrate,” she exclaims.

Starkly decorated, the house’s combined dining-living room could use some color. Apart from the gray, dome-covered kitty litter and a few scattered cat toys, the main feature is a string that dangles from a black stick tucked under a cushion of a gray couch, all for the benefit of a gray tabby rescue cat named Tigerlily, who likes visitors. So where are the flowers? “They’re in my dressing room,” says Turner, who is dressed in gray sweatpants in preparation for a standing date at Pure Joe Pilates Studios on Massachusetts Avenue near the Brookings Institution. “I spend more time there than here.”

Turner’s main gripe with Taylor, she says, is the voice. Whereas Turner packs a huge, lusty one for the ages, Taylor’s was a high-pitched, little girlish affair. “Now that may not be her fault. But, yeah, I have a real problem with her voice,” she says. “I always thought her voice was lousy, and it was. I just found her very shallow.”

Born 20 years apart, the two actresses share a lot in common. Turner and Taylor both converted to Judaism — Turner at age 30, when she married Weiss, and Taylor to marry Eddie Fisher, her fourth of seven husbands. Both actresses also suffered from debilitating diseases — Turner from rheumatoid arthritis, and Taylor from scoliosis — and both abused alcohol.

Like Turner, Taylor also enjoyed a stint turning heads in Washington, though the scene was a lot different then. When Taylor came to town, she went to dinner at the British Embassy to meet the Queen of England and ended up marrying Virginia Sen. John Warner. President Gerald Ford was running against Jimmy Carter, and outspoken First Lady Betty Ford was arguing for women’s reproductive rights, which was highly controversial. A decade later, Taylor, also divorced, made her political mark as a fierce advocate in the fight against AIDS.

AIDS may no longer be such an explosive issue, but the subject of women’s reproductive rights still festers. Giving President Obama a poke, Turner, who serves as chairman of Planned Parenthood’s Board of Advocates, says, “I am a little disappointed he was not more active with judicial appointments. Too many vacancies and the preponderance of judges were appointed by the previous administration. All the judges to decide issues involving women’s reproductive rights are all men.’’

Instead of going to embassy parties, Turner uses her Washington tour to lobby fans on issues she cares about. “I’ve never understood not being involved,” says Turner, who is also a member of the board of the People for the American Way Foundation. This month she plans two trips to Foggy Bottom to talk with State Department diplomats, both retired, and the new recruits in town for the latest round of training. The daughter of a diplomat who spent five years after World War II in a Japanese prison, Turner was evacuated from Cuba when the U.S. severed relations with Fidel Castro.

With Congress leaving town in the earliest preelection departure since 1960, Turner took her mother and sister to the Supreme Court for a private visit. She also headlined discussions at the National Press Club, the Newseum, Washington’s interactive museum celebrating the power of the media, and the Cosmos Club, Washington’s brainiest private club.

For all her famed gusto, grip and gumption, the actress isn’t shy about conceding her disappointments and vulnerabilities, especially when it comes to men. But that doesn’t imply weakness.

“I had one of my very, very few dates. My husband and I got divorced after 22 years about six years ago now, and I have almost no social life in that way, which is disappointing,” says Turner, perched on the edge of a powder gray ottoman. “But I don’t know how to correct it. Anyway, I’d gone to Saratoga Springs for the Planned Parenthood affiliate up there to do a big fund-raiser event. I decided to go up early and talk at Skidmore College. It was really exciting. They had to move us to another venue because so many people showed up. The next day, I was having dinner with this gentleman, and he asked, ‘What’s going on with you?’ I said, ‘I just had the most amazing day,’ and started to tell him about it when he goes, ‘Oh I think that’s really sweet that you do something like that for other people.’ ”

Turns out Turner does not like being called “sweet.” “I’m not wild about it,” she says. “Also, I find it condescending. The fact is, I’m not there to be sweet. I’m up there to try to make these young women angry and active. I wouldn’t call that sweet. But it was more than that. It was his detachment. I really got the sense this was completely outside his world and experience. I did not see him again. And I got the most expensive sh-t on the menu — fresh langoustine.”

The frustration of powerlessness lasts but a second. Up and ready to charge out the door for Pilates, Turner holds up the bright yellow cover of a new book, Hanna Rosin’s “The End of Men and the Rise of Women.”

“I am becoming more and more convinced that this backlash of basically white male control freaks trying to handle all aspects of a women’s reproductive cycle is really out of fear,” she says. “They’re terrified. And I’m not sure they’re wrong to be afraid.”