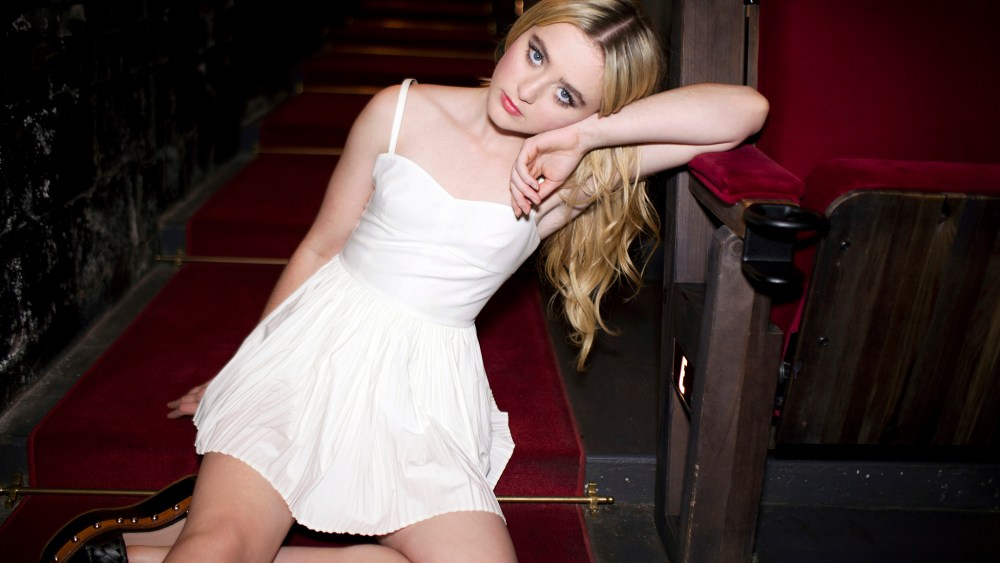 Kathryn Newton maintains that she’s just a normal kid. A normal kid in one of the biggest Emmy winners of the year and two Oscar-season contenders.

“I’ve had a really great time — this past year has been, like, nonstop for me,” says the bubbly 20-year-old before ticking off her current slate.

“I just finished a movie five months ago in Atlanta called ‘Blockers,’ and then I had no break and went straight to Ireland from Atlanta to start shooting ‘Little Women’ for the BBC. Then I went home for a week, and then I started my pilot ‘Wayward’ in Vancouver. I started at 5:30 in the morning and wrapped at 10:30 p.m., and made a flight at 10:50 — I made my flight by two minutes. And then I got here and I got to the premiere of ‘Three Billboards’ in New York. So much fun. And in between I was traveling — I went to the London premiere, too, which was insane. It was the biggest premiere I’ve ever been to. Like, I got out of the car and people were just screaming.”

The actress has had a marquee year, starring in “Big Little Lies” as Reese Witherspoon’s daughter, and smaller roles in award season bait films “Lady Bird” and “Three Billboards Outside Ebbing, Missouri.” Next year, she’ll appear in the three-part BBC/Masterpiece series “Little Women” as youngest sister Amy March, and in the Seth Rogen-produced film “Blockers,” and is even getting her own spin-off series on the CW, “Wayward Sisters,” grafted from her role on “Supernatural.”

It’s a lot to keep up with.

Newton shows up to a photo shoot at Metrograph in the Lower East Side donning a large furry jacket with a Starbucks cup in one hand and a rolling suitcase handle in the other. She recently arrived in New York to begin rehearsals for her next film, which will be her third project alongside Lucas Hedges.

“We wrapped ‘Lady Bird’ together and I was like, ‘Alright, we gotta make a deal. Every movie I do you’re in, and every movie you do I’m in.’ We’re sticking to our deal,” says Newton.

Inside the theater, she pops open the rolling suitcase trailing behind her: inside is an assortment of clothing and shoes lent to her by RED Valentino. The actress excitedly describes the dress she’d worn the night before for the New York premiere of “Three Billboards,” and pulls up a photo on her phone of the ephemeral white tulle and sequined frock. Tucked into the suitcase in a pair of white patent boots, which she picked up from Colette while in Europe filming “Little Women.”

“[Amy March] has the cutest clothes, she’s a dreamer, she’s passionate — I really love bows, too,” Newton enthused of her literary counterpart. “The clothes, oh my goodness. The petticoats. That was amazing. The costume designer Eimer [Ní Mhaoldomhnaigh] and I had so much fun creating Amy. I’ve never done a project like that, where all of the clothes were made, some of them were costumes rented but most of them were made for me. We picked the colors, Amy’s color was blue, bows on everything. That was magic. I cant wait to do another period piece.”

“Little Women” was her second time working on a project directed by a woman, the first being Greta Gerwig in her directorial debut “Lady Bird.”

“Mumblecore is one of my favorite genres of film, so I am a huge fan of Greta’s. I remember the first time I saw ‘Frances Ha’ and was, like, this is what I want to do. I like the truthful, humans storytelling that she gives,” says Newton. “So to get to work with her was a dream come true. It was like checking it off a bucket list. Like who do you want to work with one day? I would say Greta Gerwig.” (Also on her bucket list of directors? Tim Burton, and the Coen Brothers).

“On set the first week of filming [Gerwig] made everyone write down your name and your spirit animal so we can all get to know each other. And we are both poodles,” Newton says, her eyes growing even larger. “I have two poodles — I’m a poodle person. Anyone who knows me would say I’m a poodle. They’re white miniature poodles and they’re ridiculously fluffy. One’s named Snowball, and she looks like a snowball, and the other is named Jack.”

She’ll be reunited with her poodles soon: Newton plans to head home to Miami for Thanksgiving, and then will be back in New York to continue work on her next film.

What’s her secret to staying grounded when so much of life, at the moment, is transient?

“I’m a golfer and I’m an athlete, so I do that,” she says. “I’m really close to my parents. I still live at home. I’m just pretty much a normal kid…I’ve always just been a normal kid.”