For fashion’s sustainable overhaul to really take root, the industry could learn a thing or two from “Chopped.”

The Food Network cooking show challenged contestants to combine all the foods they had in their baskets into a creative dish. In other words, it challenged them to create a dish based on what they had, rather than dream up a dish and then source the ingredients — at whatever cost — to create it.

That’s how Shelly Xu approaches zero waste design — by letting the ingredients, or raw materials she has, inform what she’ll design. She’s going from fabric to concept to garment, rather than from concept to fabric to garment. And the difference is a whole lot of fabric waste.

“By combining those two ways of working, the zero waste design and the zero waste manufacturing, we would have something even more powerful,” said Aslaug Magnusdottir, founder and chief executive officer of Katla, who’s also the cofounder and former CEO of Moda Operandi.

“I just thought it was such a perfect way of tying things together and actually coming full circle with this zero waste idea, both from taking out waste from the production side and also the design side,” Xu added. “There are so few styles as universal and timeless as the hoodie.…This collaboration is a good way of showcasing how zero waste can be universal and can be a very scalable product.” 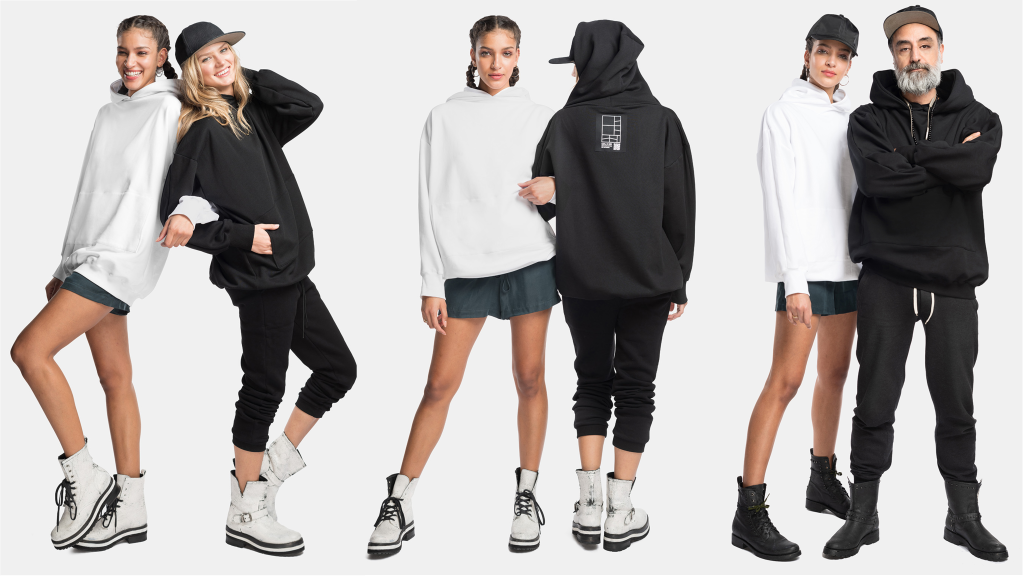 “For a zero waste design, especially at SXD, we start every design with the fabric as the inspiration,” Xu said. “I looked at it and thought, this is so comfortable this is something people will want to live in [and] I want to design something that feels oversize and feels really comfortable.”

From there, Xu considered a pattern that wouldn’t be constricting near the armholes to add to the comfort and an overall size that would offer that lived-in feel. Then she started making shapes — not quite pattern “pieces.”

“It’s really playing with geometry to see how do we maximize the creativity of what we can do within the set size dimension of the fabric. Usually when I get a piece of fabric, the first thing I do is feel it and think about it, but the second thing I do is look at the width because that is going to be the overarching creative constraint for a zero waste design. So I want to make sure each piece can fit in perfectly within that width while being as efficient as possible in material use,” Xu said.

In a way, it’s a bit of the reverse from fashion’s typical M.O.

“I think the biggest difference is for traditional patterns. First you start with a creative vision or a sketch that is very unconstrained, like this is kind of the overall silhouette of a hoodie. Or maybe if you don’t want to be so creative with your hoodie, you look at how hoodies until now are done and then you make some changes to that pattern. And what that means is that there are a lot of curves in the way you cut,” she explained. “The pieces obviously do not fit together because the way you think about cutting comes after you having envisioned a design. So there are inevitably fabric scraps that comes out of that.”

While anything that could save 25 percent in material use would seem like the way to go with every design, there are challenges with that, hence the reason Katla can’t yet convert all of its hoodies to zero waste versions of themselves — though the aim is to gradually move in that direction.

“That skillset doesn’t currently exist among most of the people we work with, so the teams that have been making our patterns they’ve never done zero waste design,” Magnusdottir said. “This is a special skillset [that] hopefully more people will start adopting but it’s another thing that’s going to take a little bit of time in the industry.”

For one, factories will have to be willing to experiment with overhauling a process they have gotten down pat over decades.

“When I spoke to factories several years ago, they were pretty hesitant about creating things zero waste because, for example, they’re used to just cutting the edges of the fabric right away from the beginning. Or because the regular patterns are irregular shapes, they actually program the cut to have spaces between different shapes…so there’s automatically, programmed into the manufacturing process, fabric waste from the start,” Xu said. “To actually make sure that is not the case, it’s actually a change in not only design but also production.”

It also means grading is out — each size for this zero waste hoodie needed to be designed separately.

But for those who would begin to fret that this isn’t scalable, Xu has a response in the works: “My start-up, we’re actually working on a software program that translates design illustrations into zero waste tech packs. It’s going to take a few years to build but I’m actually building a team for that so then we can scale zero waste design.”

In the meantime, the new Katla x SXD hoodie will come in black and white, in two sizes, for any gender, and will retail for $220 (in line with the price points for Katla’s traditional products). And there’s no risk of the drop selling out.

“The beauty of the zero waste manufacturing is we actually don’t sell out, we make as is needed so in small batches and made to order.…We plan to run this for a certain period of time and we will replenish and stay true to this. We’re not building a large amount of inventory up front, we’re reacting to our consumers’ demands in terms of quantity,” Magnusdottir said. “And that’s also part of the reason to stick to just a simple color palette, these are fabrics that we carry anyway and then we can see how it does. And who knows, if it does well we may launch more products together in the future.”

In another move that speaks to the kind of collaboration and sharing fashion could benefit more from, the Katla x SXD hoodie design will be open source. In fact, a drawing of the pattern will be featured on a patch beneath the hood.

“We wanted to replicate Silicon Valley’s open source philosophy,” Aslaug said. “Obviously, we both want to build successful brands but there’s a bigger mission behind…what we’re doing. We want to help contribute to a transformation in the industry, so [the] more and more people implement these types of practices, zero waste manufacturing and zero waste design, the more we can move the industry.”