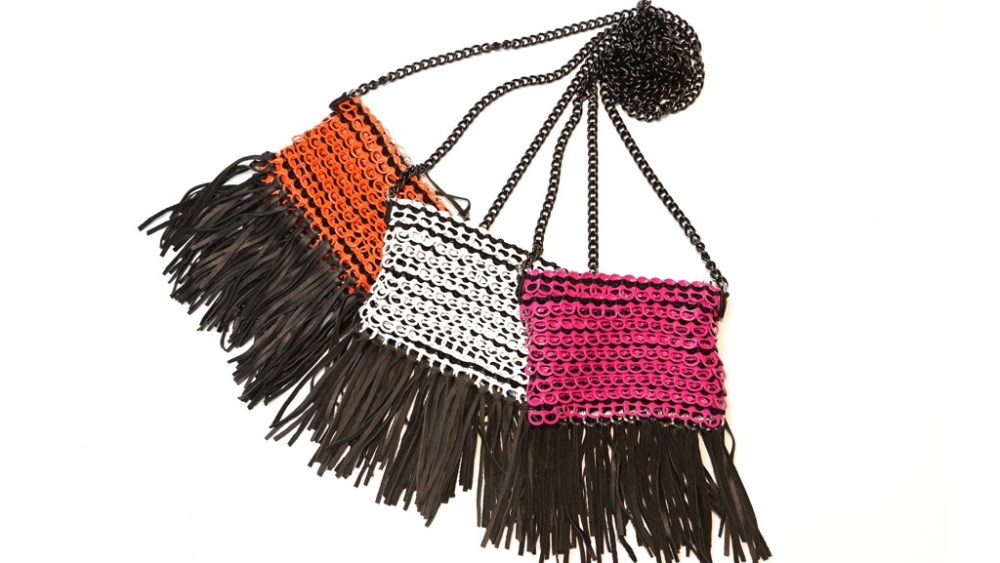 Cameron Saul is taking upcycling to a whole new level.

One half of the duo behind Bottletop, and the son of Mulberry founder Roger Saul, Cameron and his partner Oliver Wayman have created a collection of luxe handbags that incorporate tabs from beer cans.

Founded 10 years ago, Bottletop burst onto the scene through its handbag collaboration with Mulberry.
Inspired by a bag that he saw when visiting Uganda, Saul worked with Mulberry to create the Bottletop bag, which incorporated metal from recycled bottle tops on the outer edges of the bag. The bag became a bestseller, and Saul, who initiated the partnership in order to donate to educational projects in Africa, realized he had something bigger.

Along with Wayman, he started the Bottletop Foundation, a charitable organization that supports grassroots projects that boost awareness of health issues in Brazil, Kenya, Uganda, Rwanda, Mozambique and Malawi through fashion, art and music events and auctions. Since 2002, the fashion wing of the foundation has been on the back burner, but now, Bottletop is releasing a new crop of handbags and accessories, which are produced in large part in Salvador, Brazil.

The duo, who shares a passion for music and philanthropy, was traveling in Salvador when they noticed two things: there was a large contingent of skilled, local artisans, and there were countless aluminum can tabs strewn all over the city.

“There’s a windfall [of tabs] around Carnival. People tend to drink a lot of beer from cans. We can kind of stockpile them from that time on,” said Saul. “Once you’ve scratched the surface you realize the amount of waste materials we produce. It’s great to turn that into something that’s got a second life.”

Vincent du Sartel, a former artistic director of Loewe, has developed the bags, which comprise three collections that include varying amounts of tabs. Ranging from $150 to $1,750, the bags can incorporate more than 1,000 pull tabs, according to Wayman.

On the high end, Bottletop has created leather bags with hand-braided leather handles that weave in the silver tabs as an accent, much as the brand’s Mulberry collaboration. The midprice collection uses only pull tabs, but the tabs are hand-painted in enamel to create a funky, textured look. The entry-priced line makes use of the tabs in their natural silver tone. That collection can be purchased on the company’s Web site, bottletop.org, but the brand is hoping to reach a larger audience through its partnership with Mada Luxe, which will help distribute the bags in U.S. stores in January.

“It’s key that we have to keep it as handmade as possible,” Wayman said. “We’ve got a team of eight on leather and 33 on pull tabs. Tabs are collected on the streets of Salvador — about 20 percent we can’t use but the rest we can upcycle — we’ve probably upcycled four million [tabs] by now.”