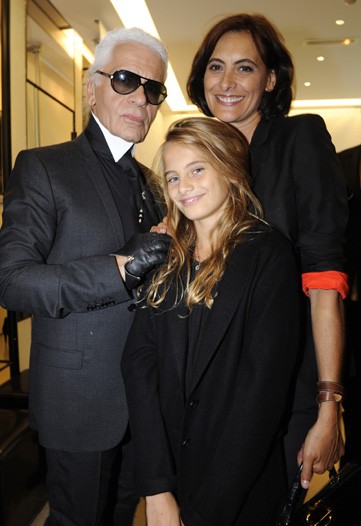 FASHION’S WEEK OUT BEGINS: Paris may have been gridlocked on Tuesday due to strikes, but that didn’t stop the urge to splurge at Fashion’s Night Out in the French capital’s chic “Golden Triangle.” Striking a pose with Peter Dundas, Lou Doillon, sporting a lacy jet-embroidered Pucci jumpsuit, disclosed she’ll be walking for Tom Ford in New York next week. Crowds of shoppers thronged the Chanel store in hopes of catching a glimpse of Karl Lagerfeld. “I’m a shoe-aholic, I go crazy for them,” actress Melanie Laurent said at the Christian Dior store, adding she’d just snapped up a pair of Giuseppe Zanotti heels and a Dior Homme jacket.

Visitors thronging the boutique were handed 3-D glasses to view footage of the label’s most recent couture show, while Dior Homme designer Kris Van Assche chatted with photographer Sarah Moon as a screen nearby displayed the short film she shot for his label. Van Assche admitted he didn’t even enjoy shopping in Paris. “It reminds me of working,” he laughed, though he admitted he splashed out on an Ann Demeulemeester jacket during the summer holidays. Dior president Sidney Toledano said he would like to see Fashion’s Night Out extended to the rest of the capital. “Fashion goes with events, so any event that is bringing energy would be really nice,” he said. Eyeing the accessories at Dior, Mylene Jampanoi said she’d just wrapped shooting “Hereafter,” directed by Clint Eastwood.

At Louis Vuitton, Delphine Arnault revealed she was a “weekend shopper,” adding that her most recent purchase was an iPad. While stroking the furs at Fendi, Ludivine Sagnier said she’s been working on a musical by Christophe Honoré, in which she plays Catherine Deneuve in the Sixties. “I like to go shopping when I get a big fat check, but I have no patience,” said the actress. “I just zoom in there and go flick, flick, flick.”

TAKE TWO: Last Sunday, on Paris’ Place de la Concorde, Joe Wright began filming Keira Knightley for a new Coco Mademoiselle advertisement. The duo had worked together on an earlier campaign for the Chanel fragrance, which broke in 2007.

BACK TO SCHOOL: Diego Della Valle has donated a spanking new public elementary school for the company’s hometown, Casette d’Ete, in the Marche region. Called Scuola Elementare Della Valle, the school will be filled with students beginning on Sept. 16. The project, which started a year and half ago, is Della Valle’s thank-you to the community that helped support his business. Designed by Della Valle’s wife, architect Barbara Pistilli, the plan was to create a real campus, a rarity in Italy, where schools tend to be old palaces or structures. The 15-class school boasts 30,000 square feet of green landscape, eco-friendly solar panels, a library, a gym, a sports field and a botanical garden.

BOYS’ GIRLS: Franka Potente, the German actress known for her roles in the “Bourne Identity” and “Run Lola Run,” appears in Boy by Band of Outsiders’ fall campaign — not to be mistaken for an ad campaign. No budget for that yet. Rather the images are what a publicist for the label calls a “visual narrative of the collection,” and will appear on its Web site. Designer Scott Sternberg, who has shot Marisa Tomei, Kirsten Dunst, Jason Schwartzman and Sarah Silverman for the label in the past, took his Polaroid and Potente to the Los Angeles County Museum of Art for a photo shoot among Chris Burden’s “Urban Light,” among other installations. Sternberg also shot Andrew Garfield, star of “The Social Network” and the latest addition to the “Spider-Man” series, in Mt. Baldy, Calif., for the men’s collection. As for why he chose these actors as the label’s faces, Sternberg said he’s simply a fan of Potente’s. “We just reached out and luckily she was into it.” The fact that Garfield is having a bit of a moment is just a happy coincidence. “Andrew is a friend that I met awhile back and we were just waiting for what felt like the right season to shoot him,” said Sternberg. “Only by coincidence was it announced that he was the new Spider-Man a few days before the shoot.

SECOND CHANCES: Nanette Lepore figures if she’s staging a fashion show in Lincoln Center, she might as well take advantage of the great acoustics. For her Sept. 15 show, she has booked John E. Forté, a Grammy-nominated singer, songwriter and producer, to perform live during her runway presentation. Despite his classical training as a violinist, Forté’s background would be called anything but traditional. Known for co-writing and producing songs for the multiplatinum group “The Fugees,” Forté was arrested at an airport in 2000 after being found with a briefcase containing $1.4 million of cocaine and was sentenced to 14 years in prison. After serving seven years in Fort Dix, he was pardoned by President George W. Bush in 2008. Among those who campaigned on his behalf were Carly Simon (who’s been “like a godmother to him,”) and Sen. Orrin Hatch (R, Utah). Following his release, Forté resumed his recording career, writing a memoir with Simon and Schuster, teaching music to at-risk youth and serving as the subject of a feature-length documentary about his life. Now he’s about to release a full-length album, “Water Light Sound.” As for what he’ll be performing on The Stage at Lincoln Center, Lepore said, “John is composing music exclusively for my fashion show, and his artistic talent reflects the feeling we all have at the moment of wanting something handmade and unique.”

REDUX INDEED: Tim Hamilton’s secondary line, named Redux, really is about second chances this season. In June, mounting expenses forced Hamilton to call off his Paris show for his designer line. But now the designer is marshaling plenty of creative resources for his Redux presentation during New York Fashion Week. Fenton-Fallon designer Dana Lorenz created a capsule collection of jewelry for Redux. The artist Collier Schorr will screen a film on a continuous loop at the event. Another artist, Kalup Linzy, might perform at the after party, Hamilton says. And Hamilton will unveil a sneaker he designed with Lacoste footwear. Lacoste has formed a project called Legends with 12 different collaborators. Only three of them — Hamilton, former Lacoste artistic director Christophe Lemaire (now with Hermès) and Ato from Japan — are designers. The rest are musicians, influential magazines and the boutiques Colette (Paris), D-mop (Hong Kong) and Bodega (Boston.)