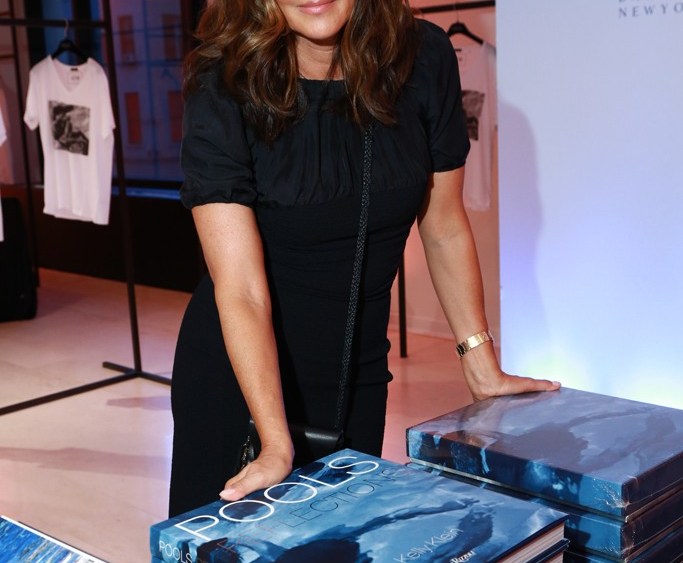 Though most Manhattanites covered their pools weeks ago when they locked up their East End abodes for winter, those in seasonal denial took refuge on the third floor of Barneys New York Tuesday evening, where a party was being held for Kelly Klein’s latest pool-centric Rizzoli book, “Pools: Reflections.”

Many partygoers sipped sauvignon blanc and circled the book’s display table, flipping through the stacked tomes. Others snapped up hors d’oeuvres — white bean puree with truffle, grilled artichoke hearts with pancetta and mini grilled cheese — while lingering by the massive Jean Pigozzi and Bruce Weber photographs stationed around the room’s periphery. The Weber image, of a couple gliding underwater, was also printed on the ATM Anthony Thomas Melillo T-shirts that clothed the mannequins scattered around the room.

Klein herself sat behind her designated signing table, inking books for invitees Fern Mallis, Carolyn Murphy and ex-husband Calvin Klein, whom she greeted with a gracious hug and double kiss. The Barneys’ contingent — Mark Lee, Simon Doonan, Dennis Freedman — worked the room while Aerin Lauder, who played cohost along with Weber and Nan Bush, stuck around the signing table, saying hello to the retired designer when he wandered over to get his book penned.

The topic may seem a little prosaic but Klein’s fascination — or “obsession” as she terms it — with pools has been abiding since her first anthology was published 20 years ago.

“The first book was spawned while I was trying to get inspiration for my own pool that I was going to build. I started researching for myself and I couldn’t stop,” Klein said while taking a break from her signing duties.

“I was there when Kelly did the first one. It was when we had the house in East Hampton together and she wanted to build a pool there. That’s how it all began,” he said. “We never built the damn pool! It’s ironic.”

While the first iteration focused on the history of pools and featured mostly archival imagery, the sequel is contemporary with photographs from the likes of Steven Klein, Juergen Teller and Steven Meisel. “I wanted this one to be sexier,” Klein explained of the book, which runs the gamut from rustic basins to splashy water parks. “I wanted it to be less historic, more modern, with more people involved, just much sexier.”

Perhaps she drew inspiration from her most memorable pool party.

“There was one party in my 20s. You know, everybody got naked and goes in the pool,” Klein said. “What else do you do in your 20s at pool parties?”