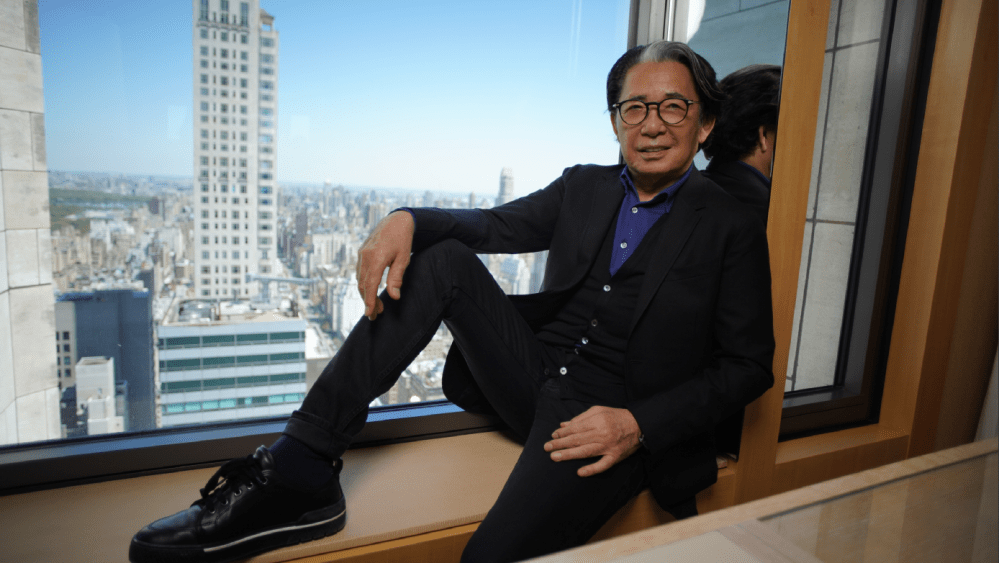 In New York for the U.S. debut of his self-titled book, Kenzo Takada wasn’t really eager to talk about himself.

Self promotion and nostalgia do not enthrall him. The designer was more energized, and at times puzzled, in discussing the current state of fashion. The Japanese-born Takada first arrived in Paris in 1965 and unveiled his first shop Jungle Jap in Galerie Vivienne in 1970. In the years that followed he embedded creative freedom, diversity, see-now-buy-now and collaborations into his design ethos. Surprised to learn that his name was referenced in a 1969 WWD article highlighting up-and-coming Japanese designers like Masaaki Kawashima and Hanae Mori, Takada said, “I hadn’t started yet.”

Even though he stepped away from his namesake company in 1999 and it’s now owned by LVMH Moët Hennessy Louis Vuitton, Takada said he still loves fashion and toys with the idea of a capsule collection.

On Tuesday morning, the Paris-based designer offered his views about Kenzo’s current design duo Carol Lim and Humberto Leon, and analysis of fashion’s leading talents. A description provided by a member of his inner circle of his being quite shy, very humble and discrete proved true, based on his enthusiasm for questions that pertained to anything other than himself. “I don’t like to show too much,” he said in regard to social media. That said, he understands it is part of a system that he must work with.

As Takada spells out for readers of his ACC Art Books-published tome, “For me, to create is to give pleasure and happiness to others, and to me the freedom to be myself.”

The idea of returning full-time to the rigor of fashion is not likely. “Fashion you must do every day, and each season. The fabrics change, the techniques change — everything changes,” he said.

Takada is at work on costumes for this fall’s production of “Madame Butterfly” in Tokyo. Co-produced by Tokyo Nikikai Opera Foundation, Sächsischen Staatsoper and Det Kongelige Teater, the performance is being directed by Amon Miyamoto. After the run in Japan, it will be staged in Dresden, then in Copenhagen and possibly in San Francisco. Takada has worked on other operas and dance performances with experimental theater director Robert Wilson, including “The Magic Flute.”

At a time when Japan and other regions were not anywhere near as multicultural as they now are, Takada was among the first designers to ingrain a global view of fashion into everything he did. “Before, when I started, getting information was very difficult, [since people were traveling less and information was not as widespread as it is now]. When I was in Japan, I wanted to know what the fashion was in Paris, New York. Now everybody can see anything right now at this moment,” he said. “In the Seventies, there was much more freedom in the contextual aspect. After May of 1968 in Paris [and the student riots], the spirit of young people changed completely.”

A big believer in the freedom of inspiration, the designer does not grasp why cultural appropriation would be an issue, provided it is not too exaggerated and is done in a way that is not meant to be hurtful. In fact, it makes him angry to think that people can’t get inspiration from people in various places, as long as you don’t want to harm anyone.

Diversity in runway models was integral to his company from the start so the idea that this is still an issue with some designers surprises him. “In the U.S.? In Europe?” he asked quizzically, unable to understand the concept still being a problem. “In New York, you can find all kinds of nationalities. New York is different than America.”

Takada recalled the huge impact that Vogue magazine’s first black cover model [Beverly Johnson in 1974] had years ago. Citing Iman and Naomi Campbell as two favorite models, Takada mentioned how his own intercontinental take on fashion was shaped in part by being a Japanese designer making his way in Paris.

Springing from the couch in his suite once or twice, Takada’s spryness belies his age, thanks in part to mornings spent exercising and doing yoga. “I don’t like to hear my age. When I say that I’m 80, I feel really old,” he laughed.

In between interviews, Tuesday night’s book signing at the Fashion Institute of Technology, and today’s informal chat with students there, Takada had one thing to get to — shopping. Barneys New York and Madison Avenue boutiques were at the top of his checklist. Inclined to describe designers as much for their kindness as their talents, Takada considered Dior Men’s designer Kim Jones to be both. He attended Jones’ first show last June, but missed the more recent one due to a scheduling conflict. Jones has also invited Takada to be photographed for a portrait for a book that Jones is working on. “He’s very nice, very sensitive,” Takada said.

Along with Jones, he gave Giambattista Valli, Givenchy’s Clare Waight Keller and Valentino’s Pierpaolo Piccioli high marks, and described Hedi Slimane’s first two collections at Celine as “very interesting.” As for the status of Kenzo’s Lim and Leon, who are nearing the 10-year mark next year and are rumored to have not yet renewed at the LVMH-owned label, he said, “They are very nice, very simple. I don’t know,” adding that they have made Kenzo’s image very young and very popular.

Asked about his own career highlights, the designer winced slightly. Starting out in 1970, there had been nothing new after the hippie movement and young people did not find haute couture that interesting, he said. Post-hippies, he wondered if he could introduce different techniques, concepts and context. After traveling by ship from Tokyo by way of Hong Kong, Saigon and Mumbai before landing in Paris in 1965, Takada did not speak French at that time but he still managed to break onto the international fashion scene. Although he settled in Paris, the fashion in London was much more exciting then, due to The Rolling Stones, the Beatles, Ossie Clark and many other new young designers, he said. As for where the center of fashion is now, Takada said, “Paris is, still,” indicating that New York and Milan are more up and down.

He travels with small sketch books and sketches regularly, even in taxis. As for whether he would agree to a capsule collection, that would depend on who, how and why. On another front, non-fashion companies have approached him about collaborations, with home decor ones being of interest. A Roche Bobois one was said to be successful in 2017.

As a designer who settled a legal battle out of court with LVMH about exploitation of his brand and a breach of contract in 2005, Takada addressed whether it is possible for an independent designer to keep the rights to his or her name and achieve global fame. “It’s complex. You need to have business to create activities and to attract attention,” Takada said. “Azzedine Alaïa somehow was a bit like that. He was very exceptional — he was small but he had a strong identity [with the public].”

As the current fashion model accelerates the speed of spending, production and design, the designer considered some of the advantages and downsides. Mobile shopping makes sense for simple pieces, such as the long-sleeve, blue polo shirt he was wearing beneath a black cardigan and a slimming black suit. Why consumers wouldn’t want to try on quality apparel baffles him, though. “If you know your size and exactly what model and color you want, this makes sense,” he said, although he asked an assistant to actually order the item online.

Painting occupies much of his time now. He wants to paint every day, but he works too much and has trouble finding the time. (Paul Gauguin, Henri Matisse and Henri Rousseau are artists he admires.) Although he is open to the prospect of doing an exhibition of his paintings, a member of his inner circle offered with a laugh, “He says this, but when we tell him there is an invitation for an exhibition, he says, ‘No, no, no.’” Explaining that he never studied painting, Takada said he needs to develop more styles and misses a challenge. Also, fond of traveling and “a bit of holidays with friends,” the designer will go to Thailand next month.

The fire that ravaged Notre-Dame Cathedral over a week ago hit Takada hard; he heard the news at Narita International Airport. “When I arrived at Gare du Nord on Jan. 1, 1965, Gare du Nord was very sad, dark and outside the station was very sad. When I was taking a taxi to my hotel, I saw Notre-Dame illuminated and so gorgeous. I thought, ‘That’s Paris.’ That was my first impression of Paris,” he said. “Many people have donated to rebuild.”

New York is also a place that the designer has a history with. His designs first graced Macy’s store windows in 1972. After landing in the city Monday night, he and his team dined at Mr. Chow.

Maybe it was all the feel-good stories or the boundless view from his 46th-floor hotel suite that made hundreds of skyscrapers appear within reach, but Takada was ready for action. After wrapping up a quick photo shoot, the designer didn’t laugh off the suggestion that the aforementioned Robert Wilson could arrange for his wish-list dance debut. Leaping in the air with arms outstretched and a professional dancer’s elongated alignment, Takada said, “Nureyev!”