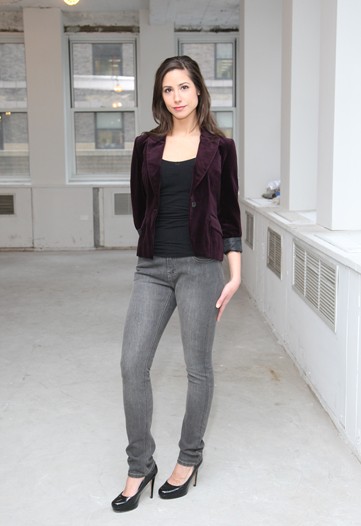 Kevin Christiana has to work fast.

“There’s a short window to work with after being on a reality TV show,” Christiana, who was a “Project Runway” castoff on season four, said of his new brand, Christiana Zinn. “I wanted to get this out there while people still knew who I was.”

While many might recognize him from the popular reality show, Christiana’s new premium denim line is far from his first real stint in the fashion business. As contemporary designer Susanna Monaco’s first cousin, Christiana landed his first design gig at Monaco’s company, where he said he learned almost everything he knows about design.

After six years with Monaco, the then-26-year-old Fashion Institute of Design graduate launched two of his own women’s brands — Kevin Christiana, a full ready-to-wear line, and K Jeans, which sold in boutiques and the Victoria’s Secret catalogue.

Christiana closed those businesses when he decided to try out for “Project Runway.” Now the 32-year-old can be seen regularly as a style expert on the “Rachel Ray Show,” is working on a screenplay he calls “a modern-day ‘Odd Couple,’” and will launch Christiana Zinn.

The collection of denim jeans features a skinny, curvy and mature fit in a wide range of washes and leg openings, from a gray skinny-leg style to a deconstructed light-washed boot cut. All jeans are available in sizes 0 to 14, as well as plus sizes, and they wholesale at $45.

“I want a woman to be able to walk into a store and walk out with a great pair of jeans that she only paid $99 for,” Christiana said. “Keeping the prices lower was so important to me, especially in this economy.”

In addition to the jeans, Christiana Zinn will include a full collection of jackets. There is a military-inspired navy wool jacket with gold buttons, a gray denim motorcycle style and a selection of peacoats and velvet boyfriend blazers. The jackets wholesale for $56.

The new line, which is based at 1407 Broadway in New York, is aimed at specialty and department stores. Christiana is hoping to expand into more categories eventually, such as shirtdresses and dress shirts.

In addition, Christiana said he is working on a high-end men’s denim brand called Mynt 1792, which he hopes to have ready for a fall launch.