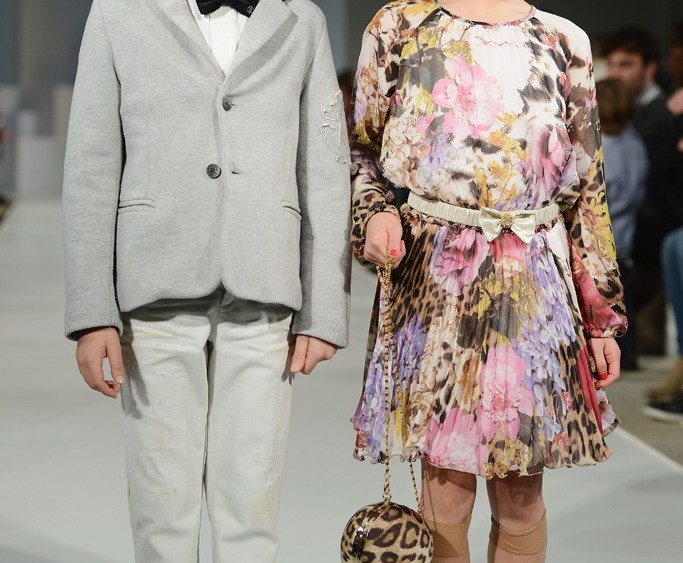 CATWALK CUTIES: There were almost as many tots in the audience as there were on the catwalk for the first ever Global Kids’ Fashion Week (GKFW) in London on Tuesday. Launched by AlexandAlexa.com, the online kidswear retailer, the invitation-only event saw Camilla Rutherford, Jemma Kidd, Jodie Kidd, Portia Freeman and their progeny on the front row at the first of two shows in the two-day event.

The key children’s wear trends for fall/winter 2013’s were showcased via creations from over 30 established and emerging designers, including Kenzo, Roberto Cavalli, Oscar de La Renta, Billie Bush, Mini A Ture and Issosy, on diminutive models that walked skipped, danced and cartwheeled down the runway at Freemason’s Hall.

No fashion week is complete without the obligatory after party so, for GKFW, the Lodge room was transformed into a children’s playland with a giant bubble machine, a manicure bar for little fingers from LittleBU, a photo booth and a popcorn vendor. It seems that fashion shows aren’t just for the ready-to-wear crowd anymore. “I don’t think [kidswear] is recognized enough, especially with the lesser known and emerging designers,” said model Freeman. “Since having my son, I’ve entered the word of children’s fashion and I love it!”

While Tuesday’s media and VIP event showcased coming trends for next season, Wednesday’s consumer show will highlight current spring/summer 2013 trends from brands including Rachel Riley, Munster Kids, Finger in the Nose, Billieblush and Mishka Aoki to ticket-buying members of the public, with the proceeds thereof going to the charity Kids Company.

With Romeo Beckham appearing in the current Burberry campaign, blogs dedicated to Suri Cruise’s style, designers angling to dress Harper Beckham and fashion watchers eyeing-up Blue Ivy Carter’s wardrobe, it was only a matter of time before a fashion week was dedicated to kidswear. That time is now.

“The time felt right to launch GKFW this year, to showcase children’s fashion in its own right and celebrate this thriving industry,” AlexandAlexa.com founder Alex Theophanous told WWD. “Since AlexandAlexa.com was founded five years ago, we’ve watched the children’s fashion industry grow and evolve in to a stand-alone category with its own trends and creative milestones.

“Each year another mainline designer branches out into kidswear — from Chloe’s ‘mini me’ girls collection launched in 2007, which is the current favorite of Harper Beckham, to Stella McCartney for Kids in 2010, which is one of AlexandAlexa.com’s best sellers. Alongside these global and established brands, we’ve seen emerging and independent children’s designers make their mark in the industry and gain a cult following — parents love discovering fresh new brands and we find they spend as much time hunting online for those unique kids’ outfits as they do for their own wardrobes.”

The two-day event is being funded by AlexandAxela.com, with production and styling costs for the shows being partially covered by the brands participating. “We have created a stand-alone brand [GKFW], which we aim to roll-out annually, or even seasonally, following our feedback and experiences with the debut event,” said Theophanous.