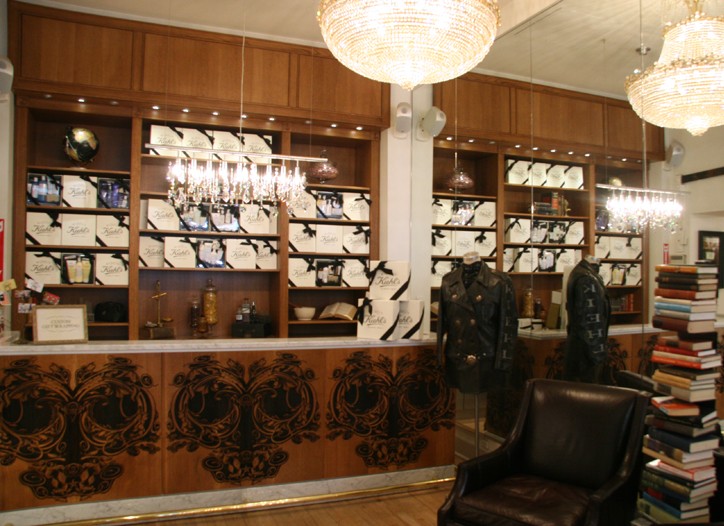 Kiehl’s Third Avenue flagship in Manhattan, which opened in 1851, has just completed a 21st-century overhaul.

Still in its original space at 109 Third Avenue, the 1,560-square-foot store now sports a new gifting counter with elaborate carved detail, an extensive assortment of products that will be sold only in that door and an elaborate windowed time line, among other changes.

“This store is our Graceland — the ultimate Kiehl’s store,” said Chris Salgardo, president of Kiehl’s USA, noting that the store also had some overhauling done during a 2003 effort. “We wanted people to leave here with special merchandise and a feeling that they’d been on a journey with us.”

The gifting station was intended to appear as though it could have been installed in the early 1900s — with a surprising twist: the wood laser-engraved design is of an elaborate skull. “We got the idea from Mr. Bones, the teaching skeleton which Aaron Morse, the second-generation Morse family member who ran Kiehl’s beginning in the Sixties,” said Salgardo, adding that Morse’s original skeleton is in the glassed-in time-line display. “He was extremely passionate about education, and often used the skeleton and other scientific equipment to explain things to his customers. It made perfect sense to us to incorporate that important motif into the gifting counter, too.”

At the gifting counter, consumers can put together personalized gifts — which are then further customized with boxes, tissue paper, shopping bags and all-white potpourri, all exclusive to the Third Avenue store. Morse’s love of flying has been reinforced with a 40 percent scale reproduction of a Pitts S 2A biplane Morse owned; even his extensive motorcycle collection — including a 1936 model originally owned by Clark Gable — has been incorporated into the store’s overhauled design. As well, the original 1851 store fixtures have been restored, and the exterior pharmacy sign has been re-created.

Another section of the store showcases a host of flagship-only products. They include a lip balm with a sterling silver cap designed by Lori Leven of New York Adorned, $90; a bathrobe with a white embroidered Kiehl’s logo, $95; a range of hair tools that range from a Pocket Spike for $16.50 to a Hair Groomers Hair Brush, $45, and even baby onesies for the littlest Kiehl’s fans, $20. If consumers buy the $40 flagship tote, they receive 5 percent off their purchases when they shop with it.

Most of all, Salgardo wants the Third Avenue store to retain its local pharmacy feel. “We’ve been here for 158 years, through the Great Depression,” he said. “We want people to feel like we’re their neighborhood store.” To that end, the store even holds monthly pet-adoption events, he said.

The overhauled store also includes limited editions of the brand’s popular Superbly Restorative Argan Body lotion, with packaging designed by Erykah Badu, Adrien Grenier, Kelly Slater and Parsons The New School for Design students, $55 for 16 oz. All profits from the limited edition version of the lotions, which will hit counters on April 22, will be donated to Waterkeeper.

Salgardo also showed off the brand’s new Marvelous Mineral Mascara, which has just hit counters. “Acacia gum is used to thicken the lashes and keep the color from flaking, while minerals provide the color. It also includes aloe vera, jojoba oil and vitamin E, to stay true to our treatment roots.” Available in black and black-brown, the mascara retails for $16.50. Salgardo declined to discuss sales projections for the mascara, although industry sources estimated it could do $3 million to $5 million in the U.S. in its first year on counter.

In addition to its 33 freestanding stores in the U.S., Kiehl’s is also sold in about 200 U.S. specialty stores.