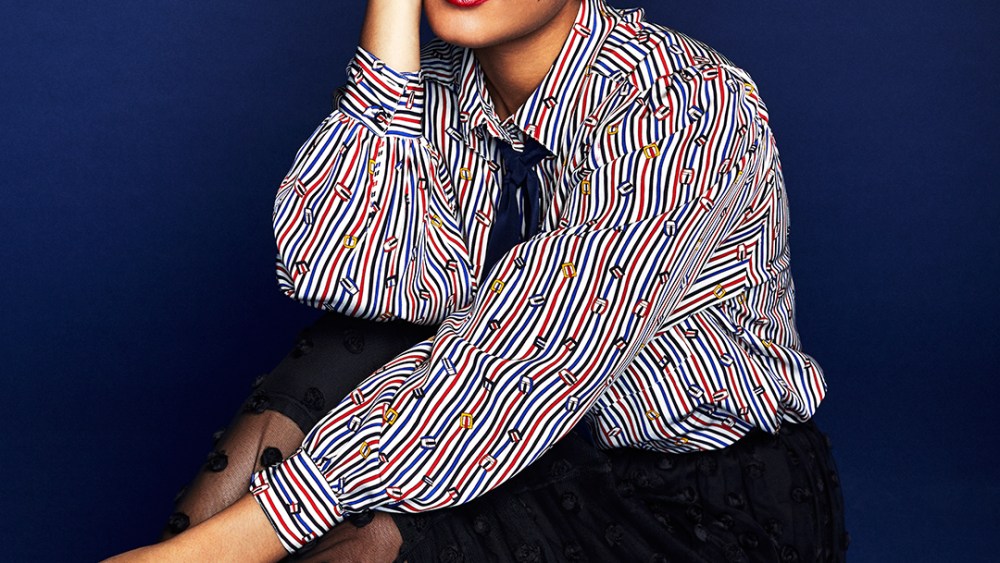 Kiersey Clemons is just 22 years old, and yet boasts a resume with range many a seasoned actor would drool over. Her Disney Channel start has parlayed into roles in some of film’s most-coveted projects, including “Dope” and “Transparent,” and she’s got a busy 2016 of film releases to keep the momentum up.

She goes full-on comedy this Friday in “Neighbors 2: Sorority Rising,” the follow-up to the 2014 surprise cult hit “Neighbors,” which saw Seth Rogen, Rose Byrne and Zac Efron go toe-to-toe in frat-themed, gasp-inducing comedic fashion. Much is expected of the sequel, which features the original cast plus Chloë Grace Moretz and Selena Gomez — but Clemons seems a natural for the in-your-face brand of funny that “Neighbors” rides on. “It’s the most off the wall stuff and the s–t you’re not thinking about that makes you laugh,” she says.

Clemons is the eldest of four sisters in a “musically inclined” family. “Everyone has a pretty good singing voice, that they kind of just did nothing with,” she says, over the phone while “just taking a walk” around SoHo. “But my great-grandmother actually made a trip to Hollywood to be a movie star and then she got pregnant by my grandpa — so that didn’t work out very well. But everyone is kind of living vicariously through me.” She grew up in L.A. watching “Grease” and doing karaoke with her family, a favorite of which includes Bob Marley’s “Red Wine,” “because my cousin would always sing it, and I would be like ‘oh man I can’t wait until I’m older and can sing that song.’”

But music was never her aspiration professionally. “I grew up knowing that music was something that brought people together, and I liked that, but I don’t have the desire to be a big pop artist or sell out arenas,” she says.

Her film acting debut was on the Disney Channel’s “Shake It Up,” and marked the first of many kid network projects she would do, including Disney’s “Good Luck Charlie” and “Austin & Ally” and Nickelodeon’s “Bucket & Skinner’s Epic Adventures.” “I always wanted to do film and TV, and my mom didn’t want to just throw me to the wolves,” Clemons says. “So I kind of had to beg her. I think she started to believe me when I was like 15 or 16 and everyone else was kind of looking at colleges, and I think she realized ‘OK, this is actually what she wants to do.’”

The transition from Disney starlet to serious adult actor is, putting it lightly, a frequently botched road. But Clemons has seamlessly landed roles in some of film and TV’s biggest socially aware breakouts over the past couple years. She starred as Diggy, a teenage punk lesbian in the 2015 Sundance indie darling “Dope,” a role she won late in the audition process. “I guess I was a f–kin’ last resort,” she teases, adding that she initially doubted her chances of landing the part due to her looks. “I have a very sweet looking face, my features are very round, and I think our director wanted someone tougher looking,” she says. “It was exciting for me to go in and be like ‘Hey! Sweet girls are lesbians, too!’”

Adding to “Dope,” her credits include “Extant” with Halle Berry and Amazon’s groundbreaking “Transparent,” a show any young actor would’ve fallen over themselves to book. “I knew that it was amazing and that it was, I guess, revolutionary, but I didn’t know how people were going to receive it,” she says. “And that’s true of any project that you do, really. Any project where you’re trying to be part of a new wave or trying to change people’s thinking process, you’re always afraid they’re not going to take it in the right way or be receptive to it.”

Audiences and film critics alike have been more than receptive — the show has won two Golden Globes and five Emmys. It also served as proof for Clemons to silence her doubts over what kinds of characters she could go out for. “From ‘Dope’ I learned that instead of letting these things work against you, it’s better if you just embrace them and make them work for you,” she says.

In “Neighbors 2,” which, she says, is not a sequel to the first but rather “an anthology film,” according to costar Moretz, Clemons is one of three ringleading freshmen who aren’t down with the Greek life system that seems to cater to fraternities and their lingerie-themed parties. Together with Shelby (Moretz) and Nora (a debut performance from Jonah Hill’s sister Beanie Feldstein), Clemons’ character Beth starts a spin-off sorority that clashes, especially, with Rogen and Byrne.

Though it is without a doubt comedic, “Neighbors 2” does handle topics of sexism in Greek life and safety issues on college campuses, which was part of the appeal for Clemons. “I had done a PSA sort of short music video with Lady Gaga called “Til It Happens to You” and so I really wanted to continue to bring awareness to [the issues of] college campus rape and the safety of girls and boys on college campuses, because that’s a place where you should feel protected,” she says. “A comedy is easier for people to swallow — you’re laughing at it, but it’s still in your subconscious.”

And though she says Greek life is not for her, she argues she might know a thing or two about it from the acting world. “I think sororities are very similar to films, in that you arrive on the first day of set not really knowing anybody, and you’re like ‘OK need to make friends with these people,’” she says. “And it was definitely like that on set — the cast was mainly female and we had a lot of girl writers, and we had a lot of fun together.”