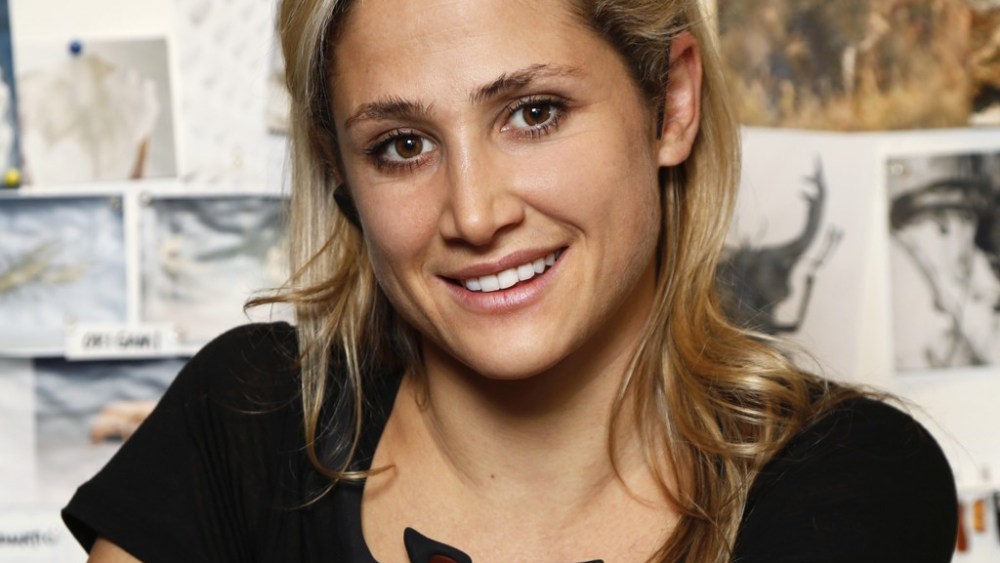 Most of the pieces, making their debut at the designer’s runway show during New York Fashion Week on Feb. 7, are created via 3-D printing from structured, lightweight nylon and produced through a partnership with 3-D printing marketplace Shapeways.

Ovitz said she “didn’t want to do your typical foray into jewelry” for her premier Kimberly Ovitz With Shapeways collection. The statement has dual meaning, as it applies to both the materials and the styles in the five-piece line comprising a collar, ear cuffs in various sizes, rings and bracelets in either black, dove-gray or cobalt-blue nylon and stainless steel with an antique finish. Save for the collar, the most traditional of the group, Ovitz sought to create a more alternative take on contemporary jewelry, such as a ring that extends and hugs the area between the index finger and the thumb or a bracelet that wraps around the wrist and connects to the hand with a ring.

Wearing one of her own black nylon collars paired with a T-shirt, skinny jeans and lace-up boots (also all black), the 30-year-old designer acknowledged the pieces could never have existed without the digital world, where Shapeways’ technology allows talent to digitally manipulate the materials in a way not possible using traditional design processes. Her designs are originally produced on white nylon and then dyed the desired color, which Ovitz purposely kept predominantly neutral and focused on just four colors. Prices range from about $50 for a small ear cuff to $150 for a nylon collar (the stainless steel version will retail for between $400 and $500).

“I looked at animals and insects and how they have innate protection systems. I saw a lot of armor, camouflage and colors I would expect to be synthetic but you actually see in nature,” Ovitz said of her “natural defense mechanisms” inspiration for jewelry and the fall 2013 ready-to-wear collection.

Another attraction of this method of design is that the quick production turnaround time — two to three weeks — allows for the immediacy now demanded in the fashion industry.

“It’s revolutionizing the immediacy of fashion. I want to infuse technology into what I do. It’s the future,” Ovitz said, noting she plans to make accessories a permanent category of her four-year-old business.

She wants to take it a step further as well. In addition to allowing consumers to order jewelry from her Web site, kimberlyovitz.com, directly after it walks down the runway, Ovitz wants to get the customer involved going forward. Eventually, she will use crowdsourcing to get input from followers about colors and will even let them personalize their own pieces.