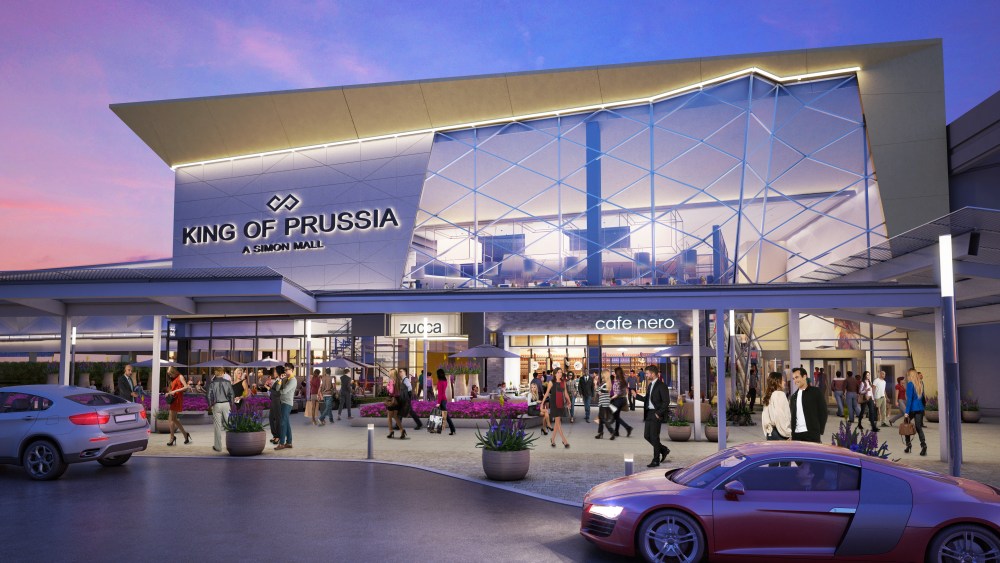 It’s might be a cliché, but in the case of the King of Prussia mega mall, it still applies: bigger must be better.

The nation’s second-largest shopping center, dwarfed only by the Mall of America, today unveils a dramatic two-level expansion, adding 155,000 square feet of retail and restaurant space bringing the total to 2.9 million square feet.

The expansion adds a total of 50 retailers and restaurants to the mix, and equally significant, it makes the shopping easier by linking up the two sections of the mall separated by a parking lot and a wide road.

Several luxury brands already in the mall, Burberry, Hermes, Louis Vuitton and Tiffany among them, relocated  to create larger “flagship” locations within the new expansion area.

Located 25 miles northwest of Philadelphia, the King of Prussia mall houses more than 400 stores and generates more than $1 billion in annual volume. “King of Prussia is all things to all people,” said David J. Contis, president of malls for the Simon Property Group. “We have a retailer for every customer. If there is anything you want to buy, you can find it at King of Prussia.”

With the expansion, executives said King of Prussia has become “a seamless” shopping experience since the expansion connects the Plaza section of the mall, anchored by Neiman Marcus, Nordstrom, Lord & Taylor, Dick’s and Primark, to the Court section of the mall, anchored by Bloomingdale’s and Macy’s. Dick’s and Primark recently moved into a former Sears space and together generate four to five times greater volume than what Sears produced, according to Simon.

Originally, King of Prussia, dating back to 1963, consisted of two malls under different ownerships. They consolidated, and in 2011, the Simon Property Group purchased a 96 percent stake in the property. “Five seconds later, [chairman] David Simon called me in and said, ‘These malls have been two separate entities since the beginning of time. That’s unacceptable. Figure out a way to connect them,'” Contis recalled.

The expansion entailed creating a 250,000-square-foot building. “It’s all on pylons, two-and-a-half stories in the air over the parking lot,” Contis said. “Probably 80 to 100 pylons had to be driven down to the bedrock. We also had to work with the anchors who wanted new entrances. It was a very complicated build.”

The two retail areas have always been separated by a four-to-six lane road and the parking lot that shoppers  had to cross to shop both sections. “Given the volume and success of each side, people shopped both,” Contis said. “But people shopped one side or the other when it rained or when it was cold. When the weather was better, there was significant number — 20,000 to 30,000 — walking the two.” The expansion, at 1,200 linear feet, is enclosed. “This will make it easier and more convenient,” Contis said.

As part of the expansion, Simon has added a  “branded” upscale dining experience called Savor King of Prussia including Nicoletta Pizzeria, Shake Shack and Hai Street Kitchen; a four-level state-of-the-art parking garage with digital signs that indicate which levels have parking spaces available and which don’t; two valet stations, and it’s designed for comfort and relaxation, with Wi-Fi, couches, charging stations, lounge chairs and fountains;  escalators and staircases in the garage, and a concierge to check packages, make restaurant reservations and find out what’s on sale.

The expansion is designed with skylights, LED lighting, marble and granite floors, “There’s a very modern, light and airy feel,” Contis said. “Tenant storefronts are very tall and dramatic, from 14 to 18 feet tall which allows them to create own expression in a much more dramatic way.

“We really unified all three components. There are a lot of common elements,” he said, noting that the entrances, signs, colors, floorings are designed with consistency.

For today’s opening, instead of a ribbon-cutting, there will be a “ribbon-joining” event, symbolizing how the mall has been unified, Contis said.

Thirty-three Simon properties are undergoing redevelopments and expansions at a cost to Simon of approximately $2.1 billion over a two-to-three-year period. “We continue to evolve the mall,” Contis said. “The most successful operators see what the customer demand is and service that demand.

“We look at each one of our properties, examine how is it doing, what the demand is, and how do we continue to make it better. It’s either expanding existing properties or recycling existing space. We are adding new space to a number of our centers.”