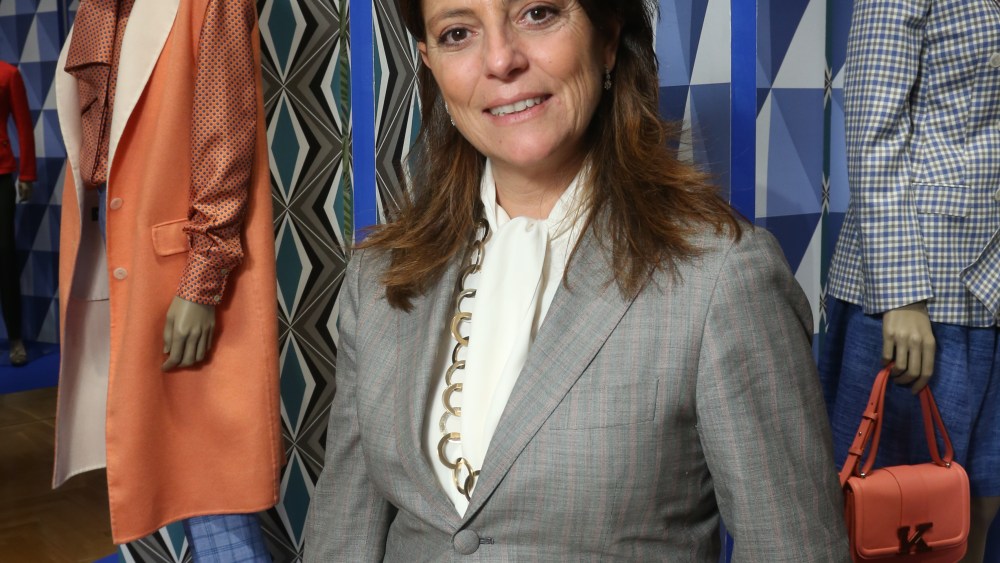 Kiton, known for its Neopolitan tailoring and ultra-luxurious men’s wear, is aiming to grab a bigger piece of the women’s market.

Maria Giovanna Paone, vice president, women’s creative director and daughter of Kiton’s founder, was in New York last week presenting the spring collection and meeting with key retail customers and company executives. It was a rare visit for Paone, who hasn’t been to New York in 10 years. Paone took some time out to talk about the development of the women’s business at the 46-year-old family-owned, Naples-based company that was established by her 83-year-old father, Ciro Paone.

Kiton, which generates around $133 million in worldwide sales, has 50 directly owned freestanding boutiques around the world, in addition to robust wholesale sales. The women’s business, which began 10 years ago, is a small operation with a focus on high-quality fabrics. The women’s collection and accessories drum up around $13.2 million in sales, or about 10 percent of total sales. According to Paone, the strategy is to double the women’s business over the next two years through a combination of wholesale and retail growth.

The lion’s share of Kiton’s business is conducted in Asia, Russia and Europe, but the U.S. is gaining momentum. In addition to its freestanding boutiques, Kiton women’s collection is sold at stores such as Neiman Marcus, Wilkes-Bashford and Richards in Greenwich, Conn. Paone said for each of the last three years, the women’s business has experienced annual growth between 17 and 21 percent. She said the collection is frequently housed near collections such as Loro Piana and Bruno Cucinelli.

Kiton has been putting greater emphasis on retail, opening more stores around the world. For the last 12 years, the firm has operated a store and showroom in New York in a company-owned, six-story townhouse on 54th Street, off Fifth Avenue, which includes three levels of retail, a showroom and offices. Elsewhere in the U.S., Kiton operates stores in San Francisco, Las Vegas and Bal Harbour, Fla., and plans to open a boutique this week in Houston. New stores have sprung up in Macao, one just opened in Zurich, and another one is slated for Milan at the end of next year. Kiton has a men’s wear store at the Four Seasons Hotel in New York and plans to add the women’s collection next season.

Retailers said their customers appreciate the tailoring and fit of the women’s collection.

“It’s terrific,” said a spokeswoman for Richards, describing the Kiton women’s business. “The fit is spectacular, and we do a lot of trunk shows with it. The fabrics are amazing, and they use men’s wear fabrics and gorgeous wool tweeds and cashmeres. They do great blouses for the ladies and ensembles of matching coats and dresses. It’s for a tailored lady,” she said.

A distinguishing feature of Kiton’s women’s collection is that it uses many luxury men’s wear fabrics adapted to women’s silhouettes. Among the fabrics for spring are cashmere bouclé, double-faced cashmere and silks. This season, silk fabrics that are used in Kiton’s men’s ties are being used in women’s bow blouses. With its conservative tailoring, the spring collection offers cropped trousers, shift dresses, blazers, double-face cashmere dusters and short-sleeved toppers, giving off a very retro feel, which WWD described in its review last month as “a tad outdated.” Retail price points range from $1,200 for a blouse to $4,000 for a jacket, up to $15,000 for a coat. Paone said the 120-piece women’s collection – with a sportif point of view – is geared to women who have strong personalities. “They’re not the wife of our male clients, she’s her own person,” said Paone, noting many of their customers are chief executive officers, chief financial officers or journalists.

Kiton’s apparel and accessories are made entirely in Italy. The company owns a 258,000-square-foot factory in Naples (Arzano), where it employs 300 tailors, as well as a knitwear factory in Fidenza and a sportswear and leather factory in Parma. Several years ago, Kiton bought the Carlo Barbera Mills, where it produces its most exclusive fabrics. The company makes everything in-house and doesn’t have any licensees. It shows its women’s and men’s collections at Palazzo Kiton, the company’s Milan headquarters, a building it acquired two years ago from the house of Gianfranco Ferré.

Kiton’s accessories, which were added two seasons ago, include footwear, handbags and small leather goods. One of its spring handbags, called Sofia, can be custom-designed with a choice of color, lining and fabric. The bag, which has a large “K,” retails for $2,800 and takes four months for delivery.

Paone said her father, the son of fifth-generation fabric merchants, still comes to work every day. “He set a great example for his life and passions,” said Paone, who also works with her sister and several cousins. “Everyone has their own talent,” she said. The company has a Web site, but doesn’t have e-commerce. It is active on Instagram, but not Facebook.

Paone said there are no plans to add any more women’s categories. “We have to develop what we have,” she said.