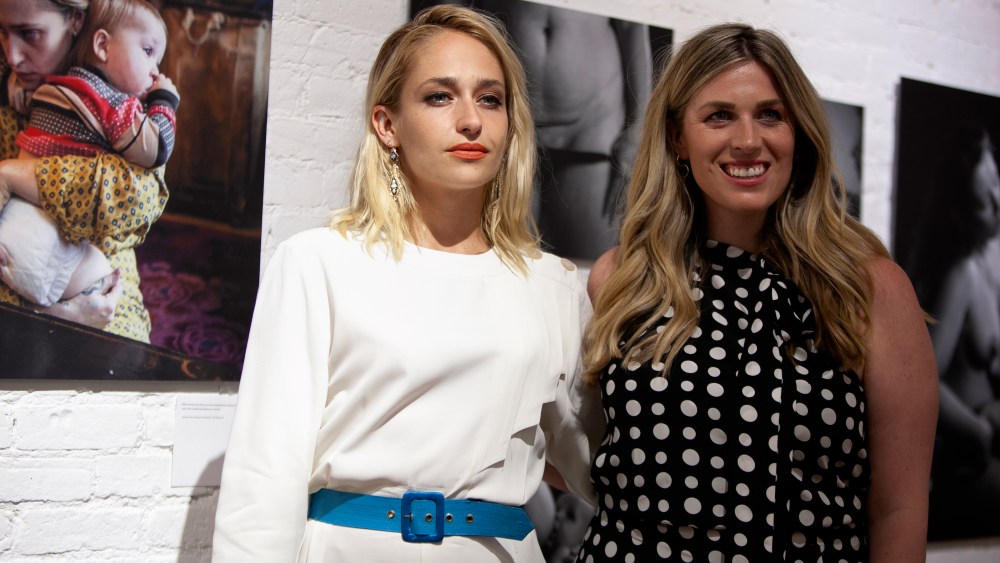 In fact, the founder and ceo of intimates brand Knix enlisted the help of celebrities like Christy Turlington, Ricki Lake, Amy Schumer and actress Jemima Kirke and her sister Domino Kirke to share photos and stories of giving birth and the postpartum experience.

But Griffiths wasn’t looking for pretty pictures of fit new moms and Instagram-worthy babies. She wanted photos that depicted the reality of giving birth. Like the messiness and stretch marks and feelings of isolation that often follow.

The result is some 250 images of women giving birth, some very raw, sometimes immediately after.

“There’s a lot of pressure for women to bounce back. And the reality is that it’s such a transformative period for women,” Griffiths told WWD.

Griffiths, who had her first child earlier this year, said the pressure to bounce back to her pre-pregnancy body started within a few hours of giving birth.

“I had a family member ask me how much weight they thought I had lost during the delivery,” she said. “I couldn’t even answer it. I was so caught off guard. I was like, ‘Well, my baby weighed nine-and-a-half pounds. The placenta probably weighed a few pounds. I lost a lot of blood. I lost my amniotic fluid.’ And then I was like, you know what, this is insane. How about all the things that I just gained through this experience? But it’s not her fault. It’s what society has programmed us to do.”

That’s why Griffiths, who was already in the middle of launching Knix’s first maternity line while she was pregnant, decided to enlist the help of nonprofits like Carriage House Birth and Empowered Birth Project to help educate people about the realities of bearing a child.

Griffiths and the Toronto-based Knix team celebrated the launch of the exhibit — along with the debut of Knix’s first maternity and postpartum intimates collection — Tuesday night in Manhattan’s SoHo neighborhood, surrounded by some of the exhibit’s photos, sparkling wine, crudite and lots of mommies, both new and seasoned, all of them talking about their introductions into motherhood.

“I just wasn’t informed,” said Domino Kirke, mother of a 10-year-old son and cofounder of Carriage House Birth. “I knew so much about giving birth. But I didn’t know about what comes next. There’s a lot of grief when you become a new parent because you’re letting go of your old self. The exhibit was really borne out of a need for everyone to start talking about what postpartum really is.”

Kirke, who was Amy Schumer’s doula, said few people know about the intense hormonal highs and lows of giving birth. That giving birth is the equivalent to taking between 200 to 300 birth control pills at once. Or, that half of all women report some kind of postpartum depression. And that nearly all women feel pressure to return to their pre-pregnancy body as quickly as possible after giving birth.

When Griffiths reached out to Kirke about the photo project, she immediately contacted friends like Turlington and Lake to get on board. Celebrities like Meghan Markle showing off her post-baby bump, along with women posting on social media, have been major strides in showing what women really look like post-delivery. It’s also helped reduce stigmas surrounding postpartum depression and created a dialogue for women to talk about other issues they face, Kirke says.

“I wish I could go back in time and tell [a younger version of myself that] she’s doing just fine,” said Katie Vigos, mother of three, founder of Empowered Birth Project and a registered nurse. “She’s doing more than enough…and that it’s OK to feel what she feels and ask for support — lots more support.”

Moreover, all of the women noted that in the last few years, a lot more post-pregnancy clothing and fashion options have entered the market. Nowadays, women aren’t forced to wear what Griffiths calls the “horrible hospital underwear” or even muumuu-like gowns after giving birth.

New York City marks the start of the nine-city photo tour, which includes stops at galleries in places like Toronto, Texas and Los Angeles. Griffiths said by the time the tour is complete she hopes they will have collected closer to 1,000 postpartum photos.

“We’re just going to keep going,” Griffiths said. “I want women to feel seen and to feel supported. I want people to talk about their experiences, to not feel alone. To know that challenges they’re having with postpartum depression or anxiety or breastfeeding, they’re all normal.”