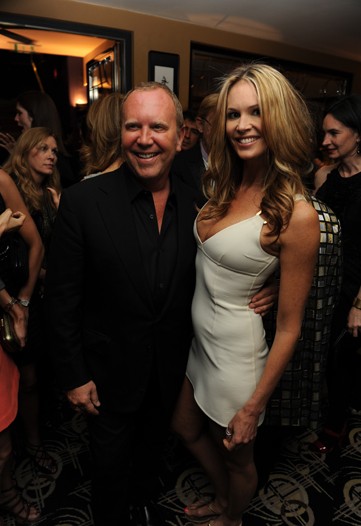 LONDON — Michael Kors made a lightning visit to London this week to unveil his first Bond Street store, woo new clients and charm his Britain-based fans.

“Thank you all for the sunny day yesterday,” he told guests during a dinner at China Tang on Monday night to celebrate the opening of the 2,500-square-foot store. “In my world, white jeans are a year-round thing.”

The store is housed in the former Ballantyne space on New Bond Street, near Burberry and Hermès, and sells Kors’ full collection. Although Kors and his team would not disclose full-year sales projections, industry sources estimate sales will be about 3.5 million pounds, or $5.1 million at current exchange.

Kors said the store, which had a soft opening earlier this month, was already ahead of budget. This is his first U.K. store, and second in Europe after Milan, and the designer — who is a London fan and faithful client of Savile Row tailor Kilgour — said it’s a big moment for him.

“We looked endlessly for a site here. London — and this part of town in particular — is a cross section of the world. It gets every age group, nationality, and high, low and in-between shoppers,” he said during a walk-through of the space.

The shop floor also boasts some vintage pieces, including a Fifties Milo Baughman sofa covered in camel-hair fabric and Art Deco mirrors. “It’s my wink to Claridge’s,” he said, referring to the Art Deco interiors of the legendary London hotel within walking distance of the store.

Kors has tweaked his offer for the local clientele, stocking more evening clothes than in other units “because the English like to dress up” for weekend entertaining in the countryside, he said, and also because he’s expecting a large Middle Eastern contingent to be shopping there.

He also plans to offer an ample supply of cashmere. “The love of cashmere here is stronger than any other city — including New York,” he said. Kors will be offering sizes from 0 to 14, which he said he wouldn’t do in New York or Los Angeles.

Lawrence Stroll and Silas Chou, owners of the Kors company, hosted the high-energy evening, where guests table-hopped compulsively and grazed on dishes including steamed dumplings, spare ribs, pork and duck. “Is soy sauce the new caviar?” mused Elizabeth Saltzman, commenting with a giggle on the momentary lack of the condiment.

Meanwhile, David Tang played pied piper to the smoking set, pointing a gaggle of blondes toward the fumoir. Stroll was as proud as a new father: “Michael, you have reached the ultimate — you have a store on Bond Street,” he proclaimed during the predinner toast.