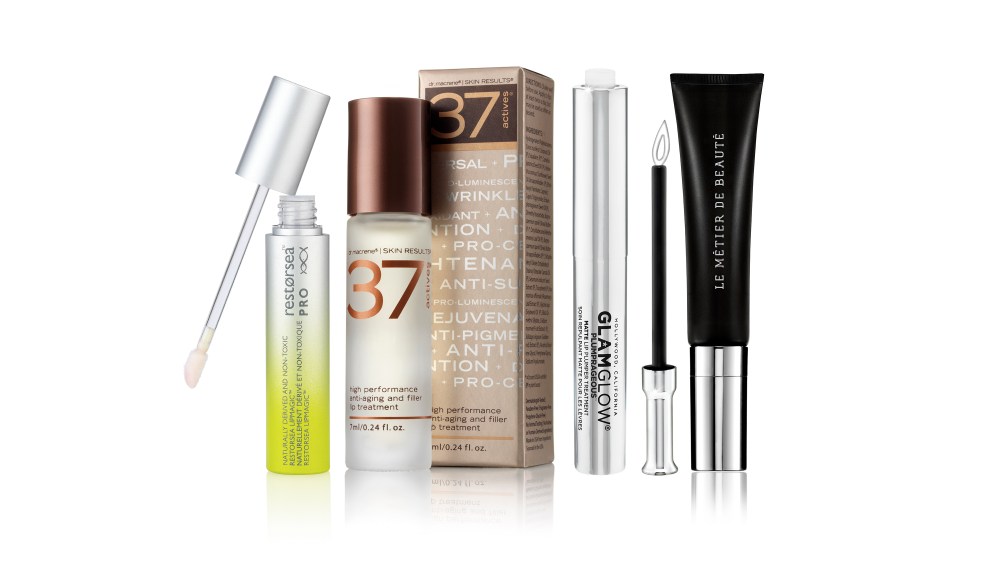 Is it the Kylie effect?

There is more focus on the lips — and enlarging them — than there ever has been. Celebrities and reality fixtures are reportedly sporting more surgically enhanced pouts than ever and their millions of social media followers want to emulate them. Brands are rushing to develop formulas that can mimic the effects of the in-office procedures that Kylie Jenner and a host of others can’t seem to get enough of.

While it’s definitely not the first time there’s been a surge in topical products designed to increase lip size — it is the first time that the social media machine can chronicle every nip, tuck, injection, microblading procedure and makeup application that these individuals are getting (voluntary or not). Even Kim Kardashian West’s plastic surgeon, Dr. Simon Ourian, has 1.3 million Instagram followers.

It’s put lips at the forefront, and the beauty industry is taking note.

Lip tingling glosses that enhanced the natural lips were all the rage in the early 2000s — most notably DuWop’s Lip Venom, the category leader at the time that worked to “plump lips” by inflaming them. The gloss causes a stinging sensation that sends blood rushing to the afflicted area — resulting in fuller and more “red” lips.

But there was soon a backlash to these glosses because the “plumping” was actually an inflammation of the lips, or an injury, according to Richard Blanch, founder and chief executive officer of Le Métier de Beauté. He has now spent almost three years developing a product that specifically does not inflame or injure the lips.

And he’s one of many brands jumping on the trend.

Le Métier de Beauté, Skyn Iceland, Glamglow and Restorsea are some of the brands that have developed next-generation lip products that promise a fuller pout — without the stinging, adverse effects or hefty price tag. Instead of irritating the lips, this new class of products generally are designed to plump the lips by blending a host of active ingredients, such as hyaluronic acid, that temporarily give the appearance of increased size. Even New York-based dermatologist and scientist Dr. Macrene Alexiades formulated a topical lip plumper to replace cosmetic procedures.

Topical lip enhancers are getting a second lease on life, and while Jenner can’t take all the credit, she is partially responsible for the increased interest in lips.

“She’s definitely highlighted it, and become a huge touchstone,” Maureen Brewster, a part-time lecturer at Parsons School of Design with an expertise in fashion and beauty in pop culture, said of 19-year-old Jenner. A resurgence in lip enhancement was already in the works, she acknowledged, but Jenner specifically helped spark conversation around the topic in the past two years.

It’s not just Jenner’s lip procedure — she admitted in May 2015 that she had gotten lip fillers after initial denials of undergoing any cosmetic procedures. But the Kylie Lip Kits she introduced a year ago further fueled even more chatter about her pout. Jenner’s Instagram account for her brand, @KylieCosmetics, has amassed 9.7 million followers, which is completely separate from her personal Instagram account, that has 79.2 million followers.

It doesn’t matter that Kylie’s lipstick and glosses aren’t billed to  increase the size of one’s lips, because the craze has given way to a crop of new products that do. The glosses and serums that have hit the market in the past six months are loaded with active ingredients, with some even created by doctors. It’s topical Lip plumpers 2.0.

For Brewster, these products can fulfill the wish of that particular look, but at a reduced price and reduced risk.

“I don’t think it’s a new phenomenon, [it’s] been around for 20 years; [it’s] just a different implementation than the injections that women used (when they could afford them). I think the improvements in beauty research have created better and safer affordable products that look natural — versus injections — and therefore it’s more ‘out there,’” Pucci-Sisti Maisonrouge said.

He said that a numbing effect kicks in after application — which is Volulip, Marine Filling Spheres and peppermint and orange oil being delivered — and lips look fuller within 15 minutes (with results that can last up to 48 hours).

“I believe topical products are going to supplant procedures. I’m living it. It’s happening now,” said Alexiades, who has added a lip treatment to her 37 Actives collection. The range includes six products from cleanser to foundation that are each formulated with anywhere from 20 to 50 active ingredients.

Earlier this year, Alexiades released a High Performance Aging and Filler Lip Treatment, priced $95, that contains 20 antiaging active ingredients. She said it has “high concentrations of volumizing hyaluronic acid and peptides” that ward off the appearance of wrinkles that also fill and treat the area.

Dr. Vic Narurkar explained that with aging, one of two things could occur that give the lips a thinner appearance. The first is called actinic cheilits, or an extra layer of skin that forms on the top lip from aging and sun exposure. The second is involution of the white roll — a result of sun damage, loss of facial fat and loss of collagen in the area right above the upper lip — which also leads to the appearance of thinner lips.

It’s this extra layer of skin that Patti Pao, founder of Restorsea, was looking to target when developing her Restorsea Pro Lipmagic serum that came out in September.

“It’s not that your lips are even shrinking,” said Pao of the skin that forms on the top lip that blurs the lip membrane line so it looks less defined and less full.

“It digests only dead skin cells and leaves the living ones in tact so you get continuous exfoliation, but without irritation so no swelling of the skin or flakiness,” Pao said, adding that if a user is younger it can prevent the formation of actinic cheilitis altogether. “It’s active; it’s alive. It moves around the area looking for something to eat.”

Pao said users, who should apply as often as they do a lipstick, can start to see results at eight weeks, but 12 is when they will experience “the full effect.”

Then there are the lip masks. Skyn Iceland recently launched Plumping Lip Gel patches that are billed to “breathe new life into aging lips” via a transdermal delivery system in just 10 minutes. Created from a combination of mustard sprout extract, wintered red algae, swertia chirata extract, wild berry extract and a proprietary Icelandic Complex, patches are oversized and lip shaped to treat lines and wrinkles on the skin around the lips too. Five gels retail for $35.

In August, Kristen Crawley caused a social media sensation when she unveiled her KNC Beauty All Natural Collagen Infused Lip Mask. A well-connected Crawley had celebrities and influencers from Kim Kardashian West to Marianna Hewitt posting about the product on Instagram and Snapchat surrounding the launch — and in the first week alone, she sold 10,000 masks from her web site kncbeauty.com.

Infused with collagen, rose flower oil, cherry extract and vitamin E, each single use lip shaped mask doubles as a lipstick primer. Suggested use is two to three times a week for 15 to 20 minutes, and five masks cost $24.99.