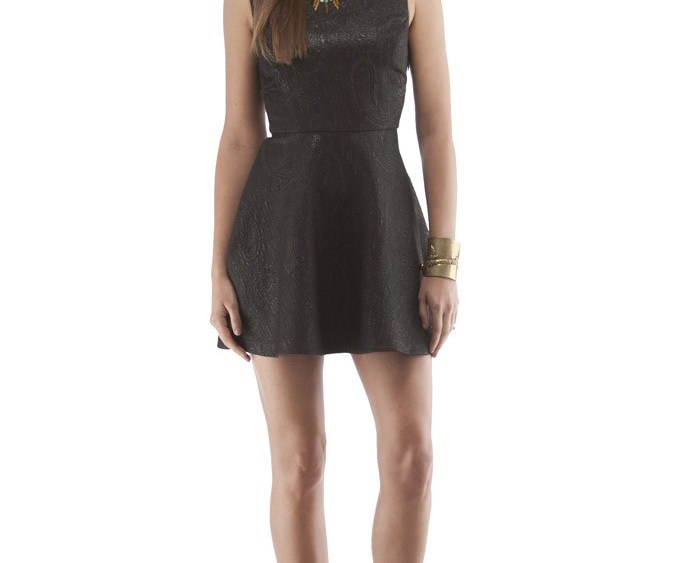 Drawing buyers from Nordstrom, Fred Segal, Madison, Kitson, Satine, Shopbop, Piperlime and other retailers in search of new styles from fall and holiday collections, the three-day event that ended June 11 was buoyed by an optimism among vendors and buyers.

“This market seems very strong and optimistic,” said Karen Meena, vice president of buying and merchandising for Ron Robinson, noting an increase of customers at its location on Melrose Avenue. “People are very excited to buy again. There’s an energy and excitement to come in and go shopping, and customers are making big purchases.”

No matter where they shopped, buyers gravitated toward exercise-inspired fashion, with cropped silk pants popping up frequently as bestsellers. Casual, comfortable materials like washable silk, organic cotton and French terry were elevated with stylistic details like mesh and velvet accents in dark and neutral tones.
Emphasizing versatility with silk tunics, drapy hoodies and other pieces that wholesale from $28 to $169, two-year-old brand Nesh NYC exceeded expectations for its debut at Designers & Agents by breaking its previous first-day sales record for a trade show.

“Life can present so many challenges. The last thing you want to have to do is worry about how your wardrobe is going to take you through your day,” said Tamiko White, Nesh’s national sales and marketing director. “So with this you can just change your shoes and add a layer, and you’re onto the next thing.”

After watching Ron Robinson sell out of Nesh NYC apparel three times in one week, Meena said she was glad to see the “casual-chic lifestyle” trend “getting stronger,” which left her feeling bullish about fourth-quarter sales.

The athleisure trend also surfaced at Brand Assembly, where well-known contemporary brands such as Rachel Zoe, Tibi and Mara Hoffman reported a good and steady pace of sales. Other best-selling items for the holiday season included separates such as Rebecca Minkoff’s metallic jacket and cropped black velvet pants, retailing for $598 and $278, respectively.

Such positive vibes were not felt across the street, where the Select Contemporary Tradeshow inside the California Market Center struggled to draw buyers despite incentives like a complimentary wine bar.
Brittany Carr, Select’s show manager, however, maintained that, overall, they “were pleased with the turnout,” adding that she felt the show had a “strong buyer footprint.”

The showrooms at the Cooper Design Space also reported a steady amount of appointments and foot traffic throughout the event. Cynthia Vincent, founder and chief creative officer of Twelfth Street by Cynthia Vincent, described her inspiration behind the holiday line as a Moroccan and Middle Eastern mash-up, with several pieces boasting bold, crisp patterns. Enhanced by beads, fringe and lace, novelty dresses wholesaling for between $157 and $180 were among the top-selling items.

Lindsay Lebby, vice president at Twelfth Street, said the company is focusing on finding new ways to keep prices reasonable. “People respond really well to our price point, so we always try and have a dress for under $300 [at retail] and we keep our blouses in the low $200 [retail] range,” she said, adding that the brand picked up several new retailers, including California-based contemporary chain American Rag and Tootsies in Atlanta.

When not visiting showrooms throughout the three downtown venues to place orders, buyers from Los Angeles-based Satine also discovered new vendors at Brand Assembly. “We picked up a new really cool and funky line called American Retro that will do really well in our stores on Abbot Kinney [Boulevard],” said Kendal Stopak, assistant buyer for Satine, mentioning that business in the stores “had been doing really well.”

Despite finding trade show traffic “a bit slower than usual,” Stopak said she detected several trends throughout the week, including palettes drenched with burgundy and gold and dresses that mixed patterns. “The racks are going to be gorgeous for holiday and resort,” she said. “Our customers will be excited because there’s a lot of great stuff to come.”