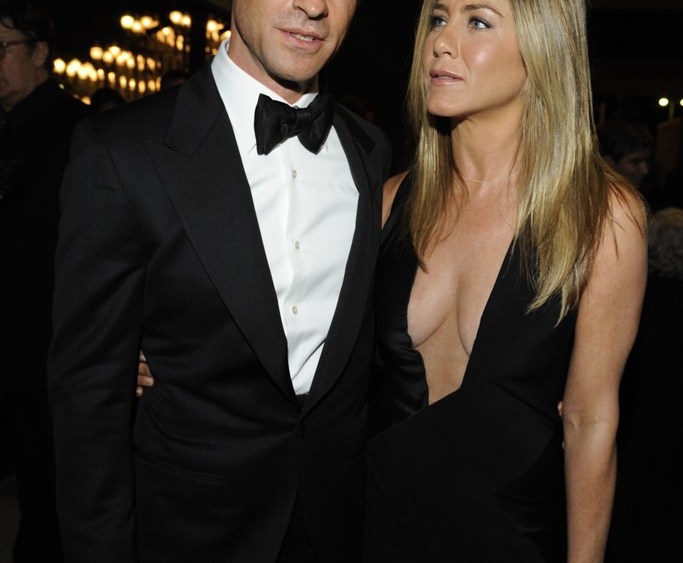 Presented by Gucci, the $5,000-a-plate benefit raised more than $3.5 million and no small amount of celeb support for the museum, thanks to appearances from Jennifer Aniston and Justin Theroux, Tom Hanks and Rita Wilson, Cameron Diaz, Robert Pattinson, John Krasinski, Kerry Washington and Jeremy Renner, to name a few. During cocktails in the plaza, Evan Rachel Wood gave a surprise performance of old standards “The Very Thought of You” and “I Don’t Know,” while Tierney Gearon snapped away for a personal art project. Nearby, Drew Barrymore and Will Kopelman showed off photos of daughter Olive to Aniston and Theroux. Minka Kelly and her date, Chris Evans, soon got in on the action as Kopelman joked of the actor, “We go way back. We just met five minutes ago.”

Also fast friends were Amy Adams and Opie, who walked arm-in-arm for a few minutes chatting. Washington beamed at her Gucci-clad father, saying, “My mom and I think he looks hot in his tux.” And while most people were baffled at the appearance of K-Pop star Psy, it didn’t stop them from snapping photos. “Do the dance!” one guest called out.

Inside the dinner pavilion, after guests watched a Lance Acord-directed film about Ruscha that featured his loyal canine companion Woody, the artist joked, “Be generous with your leftovers. I’m going to make a $35,000 to $40,000 doggy bag for him.”

Terry Semel forced command performances when he asked actors in the crowd to recall working on Kubrick’s films. “Stanley once told me, ‘If there ever comes a time when you’re asked to say anything about me, don’t.’ So I will pass it on,” said “Barry Lyndon” star Ryan O’Neal. “The first thought I had when I heard he passed was, ‘F-ck, I’ll never work with him again.’ But it was the greatest experience of all time,’” said Nicholson of “The Shining.”

Hanks’ introduction of Steven Spielberg’s dedication to Kubrick was a bit more long-winded, but equally amusing. “I’m the guy who’s gonna talk about the guy who’s gonna talk about the other guy…” he began. After the reticent director’s widow Christiane accepted his award, saying, “It seems fitting that I’m here to speak tonight because Stanley wouldn’t,” a few guests beat an early exit at 11 p.m., but those who stayed, including Diaz, who pulled chairs up front for herself and Ruscha, took in Florence + the Machine.

“You’re quite a crowd,” said Florence Welch. “Forgive me for being so rumpled. I lost a nail last night dancing with a gay pirate, but it was Elton John’s husband’s birthday, so that’s what happens.”

After her soulful set, the crowd repaired to the gallery for something better than a midnight movie — a late-night viewing of the Kubrick retrospective.