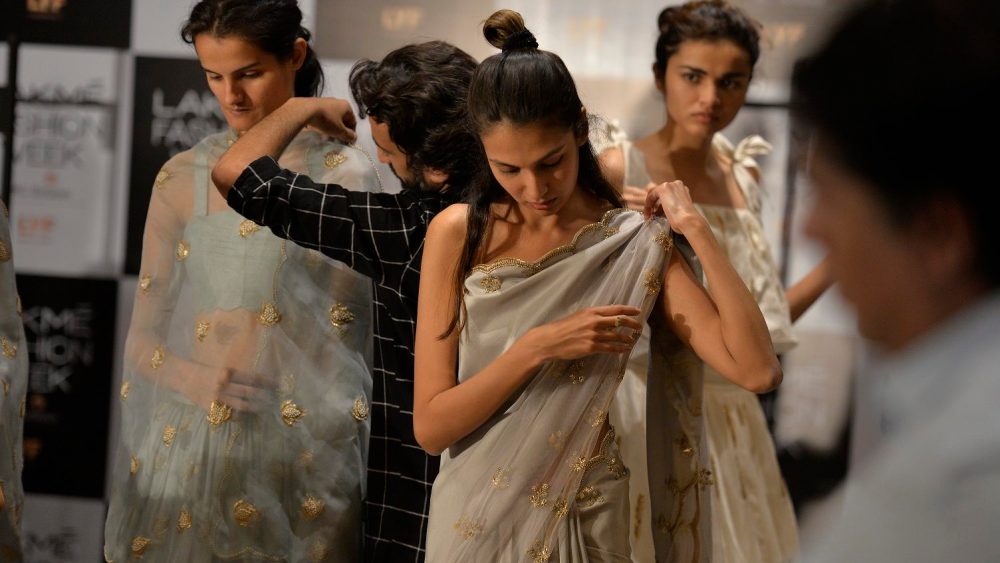 Taking a further leap into the world of technology, Lakme Fashion Week, which began this week, has been working on innovating its fashion platforms. This season is about making new connections, both in terms of speed and concepts.

Instead of the usual preview launch event in which designers and their models talk about the upcoming fashion week, LFW started out with a digital press conference launched simultaneously on social networks. Another major initiative came on Wednesday, with designer Manish Malhotra’s show. Malhotra, who is well-loved by Bollywood stars, focused on creating a virtual reality video to make the experience “more immersive.”

The week has been mainly for the current season for the last three years, with a focus on resort and festive wear.

This time, 92 designers will show at the event. It is also a season where bigger designers are returning, starting out with a pre-opening show on Tuesday by Tarun Tahiliani, a grand finale by Sabyasachi Mukherjee, and others such as Wendell Rodricks, Rajesh Pratap Singh, Ashish N Soni, Shantanu & Nikhil and Payal Khandwala on the schedule.

There has been a change of management this season as well, with previous head of fashion Saket Dhankar stepping down and Jaspreet Chandok taking charge.

Among the changes has been an earlier start on the hype, with a series of launches, discussions and events building up over the last two weeks.

Chandok explained the logic. “When we do something at an event there is another activity two hours later that takes away the eyeballs. So, what we are doing this time is setting up conversation starters strategically over a larger period of time. Each one of those activities is going to lead up into the event itself. So there is an action that we take before the event which will lead into the event,” he told WWD. “So let’s say the North East initiative — we had model auditions in Gauhati for the first time, and worked with designers to premiere some of the textiles especially in Assam. That began much earlier, but you will get a sense of that at the fashion week itself, and it is also a part of a long-term strategy.”

Chandok’s experience working with retail as a part of the Wills Lifestyle chain will also bring more immediacy to the marketing. “One of the initiatives we have taken this season is to reach out and do designer previews in stores. We look at it as an amplification for the store itself, and hope to make this business of fashion more than just event-centric,” he said.

Other initiatives that were introduced the last few seasons will continue. This includes the dramatic off-site shows that have added more grandeur to the event. “Lakme Fashion Week has been able to make a significant buzz by doing these larger than life productions as well, at off-site shows,” Chandok said.

He added that the focus on textiles and sustainable fashion would also continue — now in its 10th season.

But looking ahead in the larger sense, Chandok explained that his focus would be twofold.

“One would be how we can amplify the event and make it much larger, and second, how can we reinforce our commitment to the business of fashion, whether from a buyer perspective or on a larger basis of drawing in more consumers for the Indian designer industry. I come from a retail background and believe it is very important to enhance the business, on the basis of numbers.”

Speaking about his pre-opening show on Tuesday, Tarun Tahiliani said he was being increasingly drawn by the current season cycle following the arguments put forward by Burberry and Tom Ford on the international market.

Tahiliani explained that this change has become more essential with the times — not just because consumers see styles on Instagram and want them right away, but in the interest of keeping design authenticity more intact.

“It is constantly getting easier to copy designs, and that is a big problem. Showing in the current season makes copying that much harder. We will not show at Amazon India Fashion Week in New Delhi, but [we will] take a double stall and have exclusive viewings for the media and the wholesale buyers,” he said.

There are other factors about the changing market that are influencing his approach, and content, for which Tahiliani is keeping a close watch on the changing Indian consumer.

Malhotra’s show, the finale on Wednesday night at the ITC Grand Central hotel, kept up the fairy tale sensibility of his previous events, bedecked with flowers, with models in extravagant gowns and lehngas, an ode to the wedding season. As he described it, it was focused on “modern silhouettes for a stylish, young bridal entourage.”

Bollywood actress Shraddha Kapoor,who walked the ramp along with actor Sushant Singh Rajput, showed off the final effect, that embroidery and velvet is still very much in favor.

Malhotra maintained his signature grandeur through the show, using sequins and embroidery on silks, sheer net and lace.

Sanjay Garg, known for his focus on weaves and Indian textiles, will be one of the highlights of the week, with the last show on Thursday night.

His collection, he said, was meant to break stereotypes — not just of the industry, but also those becoming endemic in his own work. This show will not focus on colors and will focus more on garments in the form of wraps rather than stitching.

“I am using a monkey motif this time,” he explained, “and hoping I can make it the new paisley of India.”

“A monkey is restless; monkey represents the mind in Buddhist thought, which is restless.”

He spoke about the changing concepts of fashion in India. “Ten years ago, the sari blouse was fashionable when it was backless, with a deep neck — society was making a statement — to say ‘we are a liberal society and we can show skin.’ I think that is changing now. Now there is beauty in being covered as well, it is a kind of new confidence in your own skin.”

Even as he continues to experiment with weaves and garments, Garg said the sari would continue to be a core area for him. “We have 500 looms,” he said, and in a way these days we are realizing what we lost — that the sari is a cool attire and I want to work to bring it back. I don’t like to talk about revival — fashion in India is so small that we can’t say we are reviving it.

New also is a plus-size show by Shilpa Chauhan, better known as Little Shilpa. “There is no dearth of Indian wear for a plus-size person,” she said. “But there aren’t enough Western styles available for larger people. I’m trying to change that with this show,” she said.

While change is always a big focus, Lakme Fashion Week is also focusing on what it is known to do best, bringing in young designers and keeping the dialogue on fashion in incessant motion.