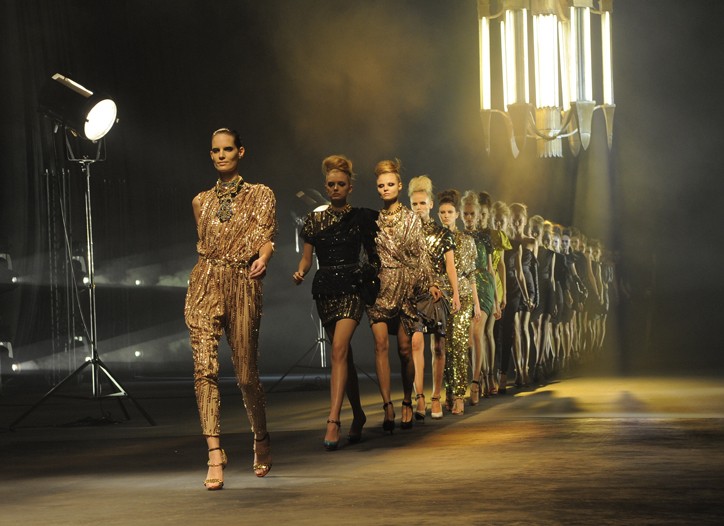 PARIS — Lanvin is about to add more fuel to its global expansion drive.

WWD has learned the French fashion house has sold a minority stake to an investor in exchange for a capital injection estimated in the tens of millions of euros.

The identity of the investor could not immediately be learned, but it is understood to be a European family holding company with a long-term horizon and no exit strategy. It acquired a 12.5 percent stake in Arpège SAS, the holding company for Lanvin.

“The company is really healthy. We only need to accelerate,” said Thierry Andretta, the French fashion house’s executive vice president. “We will be looking worldwide for great opportunities.”

He declined to name the investor, while characterizing it as in sync with Lanvin’s “human scale” organization and familial management style. The proceeds will be used to help Lanvin expand its retail network and deepen its commercial footprint, leveraging the design prowess and buzz of its acclaimed creative director Alber Elbaz, Andretta said.

Finalized Tuesday, the deal ends a long, under-the-radar quest by Lanvin’s majority owner, Shaw-Lan Wang, to find a silent partner willing to help her take the company to the next level in an industry increasingly dominated by giant players.

Last year, sales at Lanvin rose 29 percent to 140.4 million euros, or $206.6 million at average exchange rates. The company recently said revenues would likely ebb slightly in 2009, but that it would resume its double-digit growth track next year.

At present, Lanvin operates 19 company-owned boutiques and 21 franchises. Recent openings include a flagship at Plaza 66 in Shanghai, a women’s boutique on London’s Mount Street, a franchise unit in the Dubai Mall, plus a slew of shop-in-shops — for men’s wear and accessories mainly — at stores including Le Bon Marché in Paris, Isetan in Tokyo and Selfridges, Harvey Nichols and Harrods in London.

Andretta said the company sales breakdown to 70 percent wholesale and 30 percent retail and “our goal is to progressively grow to at least 50-50.” He added that accessories, which currently represent about 44 percent of the women’s business, should also be grown to more than 50 percent of the total. The deal was brokered by Pierre Mallevays, managing partner of Savigny Partners, a London-based boutique investment bank specializing in luxury goods.

It is understood that if Lanvin needs further funds, the door is open for the investor to inject more capital, while remaining a minority shareholder. Last year, WWD broke the news that Lanvin was in talks to sell a minority stake to an investment vehicle linked to Qatar’s ruling family; however, no deal was concluded. At the time, it was understood Wang was seeking to sell 35 to 40 percent of Lanvin at a price that would value the business at up to 200 million euros, or $297.5 million at current exchange.

In recent years, Lanvin has attracted interest from most of the industry’s biggest players, including luxury titan Bernard Arnault of LVMH Moët Hennessy Louis Vuitton, parent of brands including Louis Vuitton, Fendi and Givenchy.

However, strategic investors favor majority control of brands, something Wang, a Taiwanese media magnate eager to hold on to the 120-year-old Lanvin, has been unwilling to cede.

Wang bought Lanvin from L’Oréal in 2001, but has struggled to keep pace with competitors in terms of product categories, marketing impact and retail development. The company also only recently entered the black.

In 2007, Wang sold Lanvin’s fragrance and cosmetics business to Inter Parfums SA for 22 million euros, or about $30 million, saying she needed the funds to develop its ready-to-wear and accessories businesses. She also sold the rights to the Japanese business to Itochu.

Andretta assured that the deal with its new investor has the blessing of Elbaz, who catapulted Lanvin into fashion’s major leagues with his soigné and feminine dresses, romantic costume jewelry and coveted ballerina flats.

On Friday, Elbaz is to receive an honorary medal from the mayor of Paris in recognition of his impact on the fashion capital. Having more capital to grow Lanvin into a bigger player should be gratifying to the designer, who partnered with Wang in the rejuvenation of the brand for the past eight years but is often seen as being at eventual risk of being poached by a larger fashion rival.

Trained at the elbow of Geoffrey Beene, Morocco-born Elbaz catapulted onto the scene when he was recruited to head Guy Laroche in Paris in 1996. Three seasons later, he succeeded Yves Saint Laurent at the helm of Rive Gauche rtw, only to be ousted in the wake of Gucci Group’s takeover of the house. Elbaz subsequently logged a single, tumultuous season with Krizia in Milan before enduring a difficult year outside the business, joining Lanvin quietly in late 2001 with an offer of complete creative license and the coziness of a small, privately held company.

Looking ahead, Lanvin has identified Asia as among its chief growth opportunities.

In January, a 2,800-square-foot Lanvin unit is slated to open in Singapore’s new luxury shopping mall ION Orchard, in partnership with Club 21. Future projects include a boutique in Beijing and a major flagship in Hong Kong.

On Tuesday, Andretta said Lanvin signed a lease to open a store in CityCenter in Las Vegas next February.