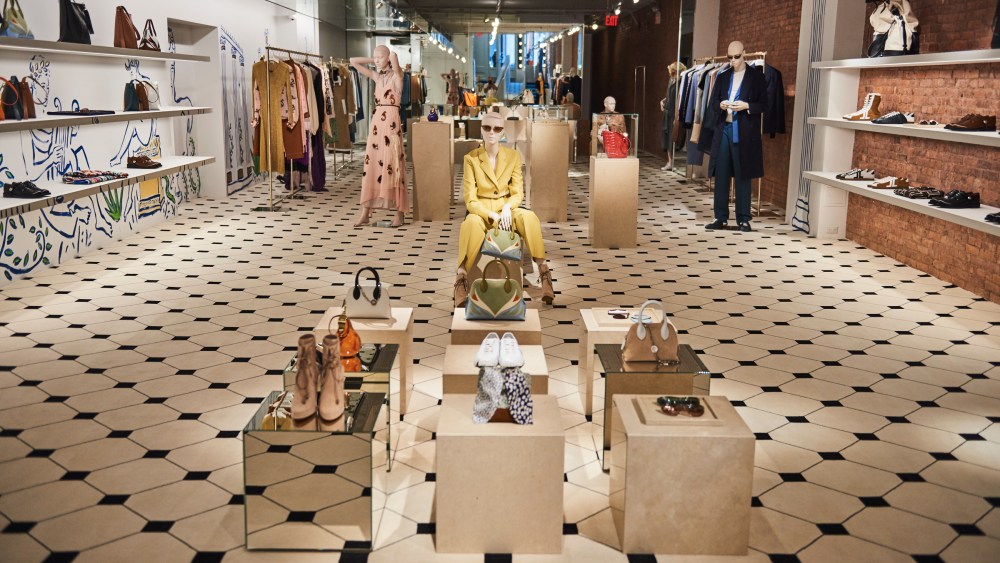 Lanvin on Saturday unveiled a 3,000-square-foot concept store at 150 Mercer Street in Manhattan’s SoHo, the first store globally to bear the imprimatur of Bruno Sialelli, who was appointed creative director of the brand in January. An example of the global design aesthetic he plans to push forward, Sialelli said the concept store was designed to convey a youthful spirit.

The concept store is the first Lanvin unit to open in New York in eight years, following the men’s store, which bowed in 2012 at 807 Madison Avenue. Prior to that, the brand in 2010 unveiled a women’s boutique at 815 Madison Avenue, which in 2016 was relocated to 849 Madison Avenue. It will continue to operate, the company said.

“We’ll redesign existing stores with a new concept in the near future,” Sialelli said. “We’re working with an architect agency. We have no dates to share yet, but it’s in the pipeline.”

The SoHo concept store is the first to be opened by the Fosun Fashion Group, which in 2018 acquired France’s oldest surviving couture house in a bidding war with Mayhoola.

The house had a rocky time after the 2015 dismissal of longtime creative director Alber Elbaz by Lanvin’s previous owner. A revolving door of designers ensued, including Bouchra Jarrar, who left after two seasons, and her successor, Olivier Lapidus, who exited after eight months.

The space features a light interior that creates “a positive tension against original elements of the building such as exposed brick covering one wall, and accentuated by a vast expanse of mirrors,” said Sialelli, who previously designed Loewe men’s wear and worked at Balenciaga with Nicolas Ghesquière and Alexander Wang, as well as Acne Studios, where he was senior designer for women’s wear.

A towering ramp near the entrance descends to the main selling space and is designed to evoke an experience similar to the Ganzfeld effect, or perceptual deprivation, a phenomenon caused by exposure to a uniform stimulation field.

The designer tapped the artist to design the invitation for his spring 2020 men’s show, which was held at a swimming pool, so Hall created a tableau with four men wearing swim trunks the color of Lanvin blue.

“Collectively, these elements create a modernized platform,” he added. “The shop has been planned the same way I create my collections, my characters and my visuals, which is to say, with a curative approach, including elements I like. It’s not revolution of interior design. We used references and elements for the floor, the mirrors, the bridge, etc., that are exciting and modern.”

A forward-thinking approach is the store’s merchandising strategy, which mixes men’s and women’s products together, rather than segregating them on the basis of sex on opposite corners of the sales floor. It’s how the younger consumers Sialelli is hoping to capture, shop.

The SoHo concept store is the only Lanvin location in New York that will carry Sialelli’s men’s collection. “The new categories of products — new styles and new aesthetic — I created for the brand worldwide since I arrived are present in the SoHo shop,” Sialelli said. “What’s important is that the SoHo shop is unique for Lanvin. We designed it in-house because of the space itself and its location in New York City.”

The new location has no exclusive products — at least, not yet, “but I would love to introduce some in the near future,” Sialelli said.

“Our client in New York City, like our client in major urban cities, is educated, elegant and looks for a special savoir-faire,” he added. “She’s a fashion lover and looks for silhouettes for different occasions, for the day and for the night. She’s a working girl and a life-lover. Lanvin has always been important in the U.S., so for sure, our clients are happy to see a store opening in SoHo.”