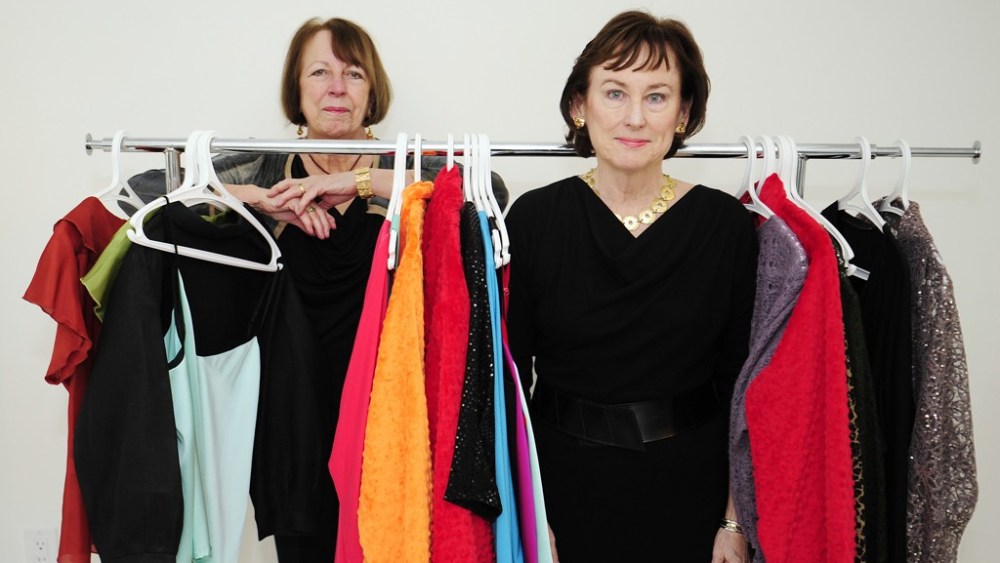 WASHINGTON — The night before surgery is never easy, especially for anyone used to taking charge. Laurel Kamen, a retired top executive at American Express here, was packing for a trip to Georgetown Hospital for a bilateral mastectomy when the idea hit her. Blasting through the blogs of sweatshirts and fleece, she envisioned a niche market providing chic options for women like herself.

Kamen stopped packing, picked up the phone, and started dialing. Fifteen months later, she is ready to launch.

Thanks to the support of Wall Street insiders, American Express alumni and a designing cousin, Kamen’s company, Alloro, kicks off today with an invitation-only cocktail party.

“I want women who love fashion and color to know there is a place to celebrate the contour of their body, to find fashions that don’t hug the body but help you remember that you have one,” said Kamen, who also appears on a video on Alloro’s Web site, where the line is available for sale.

Next month, Kamen and her cofounder Christine Irvin, a former Wall Street trader, will start a 10-city national tour opening in New York City. “We want to host trunk shows in all the major cancer centers to create a bazaar for women to meet and feel good about fashion,” said Irvin.

The company’s name, Alloro, is a playful nod to Kamen’s first name, dreamed up by her husband Al, who writes the award-winning, Washington Post column “In the Loop” chronicling the ups and downs of anyone who matters in Washington.

The D.C. launch is nothing if not a high-profile affair. The three-day fest starts with a cocktail party at the prestigious Jones Day law firm followed by a two-day trunk show on Capitol Hill across from the Shakespeare Theatre offices. The whole shebang is being organized pro bono by Prism Public Affairs. Prism’s founder, Dale Leibach, served as assistant press secretary in Jimmy Carter’s White House and communications director for retiring Sen. Tom Harkin (D., Iowa). And Leibach isn’t the only D.C. political veteran reaching out to help.

“What I find fascinating is that she and her cofounder have put together an entire business in less than a year,” said Ann Stock, the former Clinton White House social secretary and Bloomingdale’s alumna who runs the State Department’s Fulbright program “These are elegant pieces designed to help women look beautiful and move forward in their lives. I’m considering working for several hours each week pro bono.”

“I was shopping there for something to wear when I found a jacket I couldn’t afford,” said Kamen, who started talking to the salesperson about her idea. “Within minutes she had walked me into the back office where Martha Slagle listened to the idea and immediately decided to support it.’’

Kamen also got a boost from her friend and former boss James Robinson 3rd, who retired in 1993 as Amex’s chief executive officer. In addition to serving on the board of Coca-Cola, he is cofounder of RRE Ventures, a private equity firm with $850 million in assets. “We went to see him. He introduced us to another colleague, a partner, who gave us good advice and names of people to see,” said Kamen.

All in all, Kamen and Irvin talked to about 100 people in the American Express alumni circuit. Along the way, they received pro bono offers of support from Jan Rogers Kniffen, former treasurer of May Department Stores Co., and J. Michael Schell, a former Citibank dealmaker who worked until recently as head of mergers and acquisitions for Alcoa. What brought everyone together is the idea of hosting trunk shows in the top 10 cancer centers to bring women together to heal.

The line is made up of 14 pieces ranging from $40 for a camisole to $250 for a little black dress, all made with their style-conscious, post-op styling. Alloro’s signature design is the bolero jacket priced at $225 with hidden inside pockets for post-op drains during recovery. Other items include The Mary Louise, $250, a European handkerchief linen camp shirt, made in New York City, cut full under the arm and gathered into a loose cuff, and a silk charmeuse and spandex, hand washable camisole for $125.

“We use dolman sleeves to make the clothes easier to put on and off. Our camisoles have nothing to rub or chafe on the sides. The seams are all in the center of the back,” said Kamen. “Everything is constructed of the lightest fabrics with the least weight on the shoulders. Each piece has a very feminine shape without hugging the body at a time when the body is healing. And we use great colors — fuchsias, red, mint, purples, shimmering black and tangerine orange. Cancer drains the color out of women.”

Higher-end price points serve for items sewn in New York’s Garment District using fabric designed in France. “We want every woman to be able to afford at least one piece,” said Kamen, who is donating 25 percent of Alloro’s profits to a nonprofit organization specializing in prevention and mobile mammogram screening for Hispanic and African-American women in underserved regions.

For all the help, Irvin has no illusions about how tough business can be. Still, they are running things on their terms. “We went to one venture capitalist that offered to buy the idea,” said Irvin, who said they turned the offer down. “We are not building a business to be bought and sold. We want to make women feel better.”