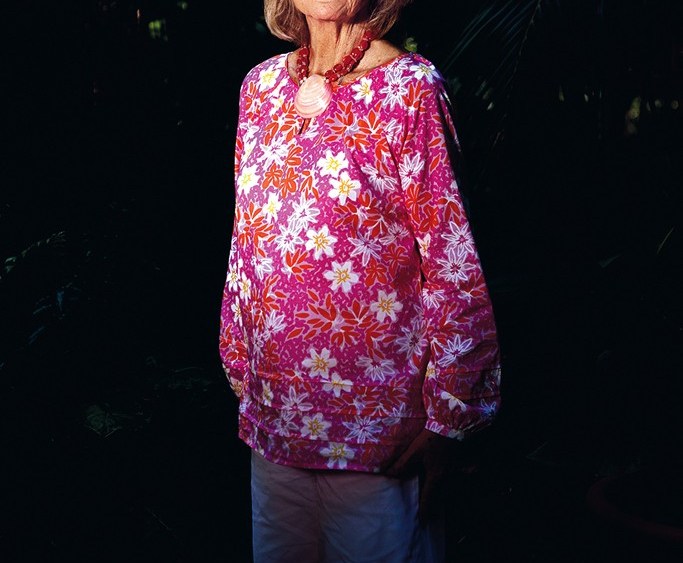 Lilly Pulitzer Rousseau, the socialite who turned designer to combat ennui more than 50 years ago, died Sunday at her Palm Beach, Fla., home at age 81.

The cause of death wasn’t immediately known, although she was reported to have been in failing health in recent weeks.

In search of a hobby after suffering a bout of depression in her late twenties, Pulitzer at first opened an orange juice stand in 1958 and then began developing brightly colored and boldly patterned shifts and blouses to help hide the stains created by her new enterprise.

The clothes were an immediate hit and within a few years were being sold by stores throughout the U.S. First Lady Jacqueline Kennedy was featured in Life Magazine wearing a shift by Pulitzer, who had been her classmate at Miss Porter’s day school.

Once established as the purveyors of whimsical tropical prints, she would never need to cope with bouts of depression again.

“She sprinkled fun and pixie dust everywhere she went and was joyful right until the end,” said Kathie Orrico, a partner at C. Orrico, the specialty retailer that operates three Lilly Pulitzer stores and carries the line in its other four stores as well. “I saw her just last week and, just like always, she had cute phrases and words that inspired us to be bright and happy.

“Palm Beach is really the only town in the entire world that has its own look and its own designer,” Orrico said. “All her designs reflected the light and the heart that she brought to the world.”

James Bradbeer Jr., president of Lilly Pulitzer, noted, “Lilly would always say, ‘It’s all about happy.’ There aren’t many places in our industry where happy is at the core. That has transcended time and generations, and it tells you a lot about the kind of special person that Lilly was.”

Bradbeer noted that Pulitzer had remained a consultant to the company following its 1993 acquisition — and subsequent revival — by Sugartown Worldwide Inc., the firm headed by Bradbeer and Scott Beaumont. Oxford Industries Inc. acquired the firm in 2010. Last year, sales grew 29.7 percent to $122.6 million, 14.3 percent of Oxford’s total of $855.5 million.

Born Lilly McKim into a prosperous Long Island family in the midst of the Depression, Pulitzer seemed destined for a comfortable life in the midst of high society. She and newspaper heir Peter Pulitzer eloped in 1952 and settled in Palm Beach, where her husband operated a citrus grove business, and the couple had three children, Peter Jr., Liza and Minnie, who survive the designer.

The Pulitzers were as renowned for their parties as Lilly was for her free, open spirit and her extensive collection of pets, including monkeys and a calf as well as the more conventional cats and dogs.

Her unfailingly sunny disposition lost most of its sheen in the late Fifties, however. “I had terrible anxiety attacks,” she told WWD in 2008, “so I went to the nuthouse.”

Her time away, in 1958, was eased by the presence of a cousin in the same facility, and she took a single lesson from her time in psychiatric care: She needed a hobby.

Drawing on her husband’s inventory, she began selling oranges to her prosperous neighbors from the back of a station wagon and later opened a stand, where juice was available along with produce. To make the stains that came with her new-found line of work less obvious, she decided to outfit herself.

“So I went to the five-and-dime, bought some fabric, took it to the seamstress, and she did it up,” Pulitzer said, opting for dresses that were “colorful and cotton and cool.”

Drawing the admiration of her juice customers, the accidental designer began selling the dresses for $22.50 apiece and couldn’t keep up with demand, aided by a designing couple at Key West Fabrics who helped conceive the lively colors, tropical print themes and other bits of whimsy that would become the brand’s signature.

“We like to say that we inhale green and exhale pink,” Orrico commented with a sigh.

While the brand caught on with stores including Saks Fifth Avenue and Lord & Taylor, Pulitzer had a few other things working to her advantage, including the Jackie Kennedy spot in Life and the Kennedys’ preference for Palm Beach as a vacation destination. “The light was shining in this spot,” she said of Palm Beach during the Camelot period.

She had found her niche, and refused to veer far from it. Pressed to develop cold-weather fall collections, she resisted. “It’s always summer somewhere,” she famously replied to one retailer pushing her in that direction.

For a period, it seemed as if the end of Camelot might have been the end of the Pulitzer enterprise. The designer and Peter Pulitzer divorced in 1969 and the Palm Beach “in crowd” dispersed in the decade after. By the early Eighties, the colorful aesthetic seemed somehow out of fashion. She discontinued the business in 1984 and opted for full-time motherhood. She would later marry Enrique Rousseau, a Cuban lawyer who died in 1993.

After her husband’s death, the second phase of her designing career began when she was approached by Bradbeer and Beaumont about relaunching the business. (Invited to participate, Christopher Burch declined.) “For me, it seemed like a no-brainer,” Bradbeer said in 2008. “I grew up with Lilly since my mom was such a big fan. She wore it — and even worked in a Lilly store — and I remember how sad she was when the brand was retired in the Eighties.”

The partners’ instinct — that a new generation was ready for the embodiment of the sunny disposition contained in the Pulitzer aesthetic — seemed borne out after the terrorist attacks of Sept. 11, 2001, when business, down for so many other brands, actually picked up.

The business had been a “good ascent,” Bradbeer told WWD Sunday, but the growth accelerated after 9/11. “Women feel uplifted ‘wearing a Lilly,’” the executive said. “That gave us that confidence that we could bring the brand back.”

Orrico pointed out that Oxford, led by chief executive officer Thomas Chubb 3rd, appears to have “respect for both what Scott and Jim have done and an understanding of what Lilly means to everybody and the importance of her legacy. And they’ve been extremely supportive of us” as a retail partner.

Oxford issued a statement Sunday saying, “Our thoughts and prayers are with [Lilly’s] family and loved ones. Lilly’s bright and happy outlook on life is the essence of the brand that bears her name. Oxford is proud to be part of her legacy through our ongoing stewardship of the Lilly Pulitzer brand.”

“Lilly could have coasted,” one devotee said. “But she never did.”

“Our responsibility was to bring the brand forward with a clear message in place — for the best times of your life, with prints and colors as its support,” Bradbeer said Sunday. “We built on her template, but she would hate the word ‘template.’”