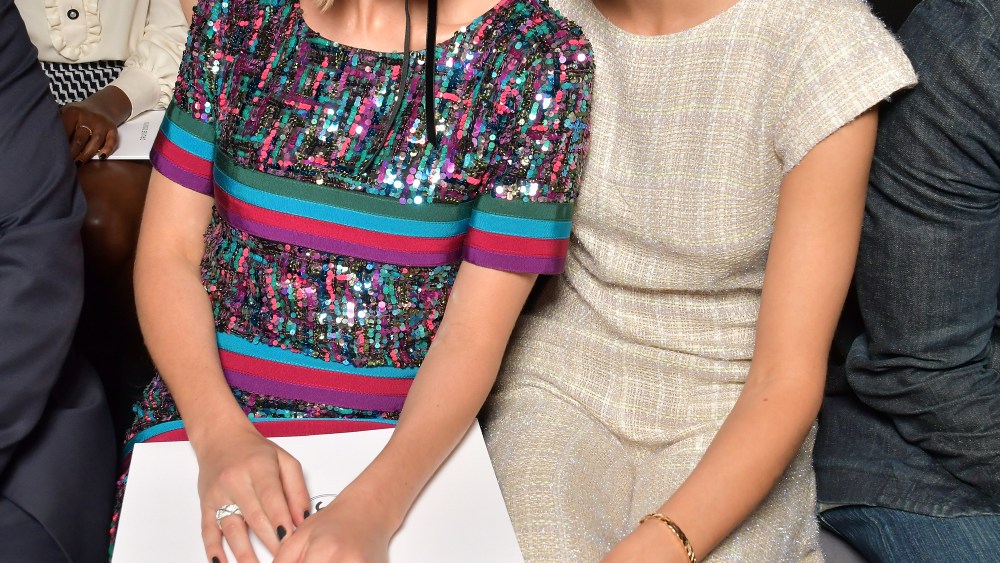 LOVE BOAT: Even Lily-Rose Depp — part of the Chanel clan — was speechless entering the Grand Palais on Thursday for the house’s resort show, with a gigantic faux cruise liner parked in the middle of the site, smoke puffing out of its chimneys and plastic waves rippling under mock moonlight, with a soundtrack of seagulls in the background.

“It’s so cinematic, it reminds me of Parisians going on vacation. There’s something quite Sixties about it, I’m so in the mood to go somewhere in the sun,” Depp said after the show. The aspiring actress, who has grown up attending Chanel shows with her mother Vanessa Paradis, said she’d just wrapped filming “Les Fauves,” directed by Vincent Mariette, and is about to start filming Louis Garrel’s “Un Homme Fidèle” alongside Laetitia Casta. Both are French-language movies. “I’d like to do it all, but that’s what I’m doing right now,” she said.

“I’m a massive fan of ‘Titanic,’ I was really hoping they were going to play some Céline Dion,” deadpanned actress Phoebe Tonkin, who confessed she doesn’t have sea legs. “I’m a terrible boat person, apparently the key is to not wear shoes on a boat,” she said.

“’Titanic?’ No, no. It reminds me of that wonderful [Rainer Werner] Fassbinder picture from the Eighties, ‘Querelle,'” tutted director Steve McQueen, who is working on a movie called “Widows,” shot in Chicago and starring Viola Davis, Elizabeth Debicki, Cynthia Erivo and Michelle Rodriguez. “It’s a real movie about real women. It’s not a handbag and high heels picture,” he said sharing the storyline. “It’s about four women whose partners pass away in an attempted heist, they’re professional criminals, and the women have to gather up the pieces and take the reins of the husbands’ work, and they’ve never met before,” he said. “The actresses in it are just amazing. I definitely think it’s the best film I’ve made so far.”

McQueen, who in the past has directed a campaign for Burberry, working with Christopher Bailey, said he had come to town just for Chanel, but declined to say if he was working on a project with the house.

Rapper Lakisha Kimberly Robinson — aka Kilo Kish — attending her first Chanel show, gave the set “10 stars,” though she confessed it was all a little daunting. “At first, I was like, the show’s on a boat, am I going to get seasick?” she said.

Robinson, who has an EP called “Mothe” due out this summer, said she likes to style her costumes herself. “I’ve been gathering different materials and putting different outfits together. I bead on different elements and customize them,” she said adding that she has also been working with digital artists on some video game projects “and making myself into a character.” “I’ve been playing this ballerina character, there’s already a bit of it on social media. I’ve been going to ballet classes and wearing tutus everywhere, going to Whole Foods.”

Dancer Mette Towley talked about her collaboration with Revlon as a creative consultant. “I’m working with them to look at how we can make their products even more beneficial for women, and how we can bring some interesting creative concepts into their digital space using dance and all sorts of things,” she said. “As a performer I do my own makeup all the time, I have to be efficient.”

The dancer, who will be touring with N.E.R.D. this summer, revealed she is also going to be helping Vogue direct behind-the-scenes footage at the Met Gala next week. “It’s movement directing. This is the first year where cameras are going to be allowed inside the Met ball and they’re going to create a ton of content, and it will be my job to go in and assistant them and make sure whoever we’re going to film is comfortable, and suggest movement ideas,” she said.

So what was her take on the set? “This is incredible, I mean there really are no words. I thought, ‘Maybe there’ll be a couple of backdrops.’ There’s a full-blown boat — and we’re going to step into it and go to an after party. It just feels so surreal to be here with Chanel.”