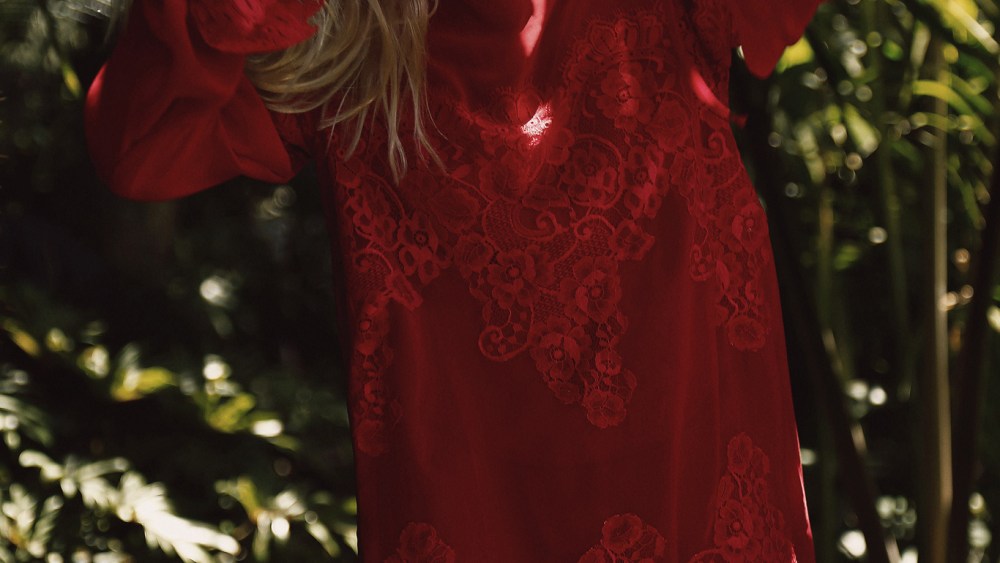 L.A. is getting set for its spring market week, with a host of trade shows and events taking place at various venues around town. Here are a few new lines to check out.

Not many designers seek inspiration from a drill sergeant who owns an extensive collection of Eres lingerie. For TyLynn Nguyen, she calls that figure of womanly empowerment not only her muse, but also Mom.

The Los Angeles-based designer cites her 52-year-old mother as the source of style for her line of unstructured bras, high-waisted panties and, starting with next spring’s collection, bodysuits.

“My mom plays a big role in what I see as beautiful in women,” Nguyen said. Her customer, ranging in age from 25 to 45, is cut from the same cloth, namely, “a woman of influence [who] definitely manifests her dream into reality.”

The 28-year-old designer realized her own ambition after studying textile marketing and design at University of Rhode Island. Corsetry classes at nearby Rhode Island School of Design connected her to a teacher who had worked at Chanel and Céline.

“She would tell me how important intimates were,” Nguyen recalled. “When I sewed them, I loved it.”

A decade working as a model let Nguyen learn about the business and craft. Then she spent over a year preparing her debut collection before launching it last March. Aware that fit is crucial to a successful innerwear brand, she hired four fit models and recruited her friends — TV producers, women with children and a marketing entrepreneur — to test the pieces. Ensuring maximum comfort, she integrated a sturdy elastic and banished underwire from her bras. For support, she incorporated double mesh into both bralettes and the built-in bras for the bodysuits, which sit higher on the waist and reflect her minimalist style with thin, straight straps.

Besides the bodysuits, Nguyen is also offering a sleep set comprising a camisole and shorts for spring. Plus, she’s introducing “polyelastane” to complement silk satin and stretch laces stitched with flowers and polka dots, all dipped in a palette of light mossy green, cream, black and white. While she stocks her lace and silk from France and Italy, she produces everything in Los Angeles. With annual sales totaling under $200,000, her retailers include The Guild in Los Angeles and e-commerce site Lisa Says Gah.

The common thread between rockers and cowboys might not be obvious until one notices the multifaceted handbags designed by Sorenne Von Drenik. The Portland, Ore.-based designer melds the requirements from her life on the road as a rocker’s wife with her skills braiding leather in the same intricate technique that wranglers use to make bullwhips, bridles and reins.

“That was what inspired the line: being on a tour bus and wishing I had a bag with another use — like take a strap and wear it as a belt,” she recalled of a tour in Europe with her husband, musician Matt Drenik.

To differentiate her designs from competitors’, she taught herself how to twist 12 heavy, sturdy cowhide strands into a herringbone pattern, referring to books, YouTube videos, an online leatherworking forum and a one-day workshop with an artisan who showed her how to polish her handiwork. She took on the task of braiding every rope, then shipping it to her manufacturer in New York. When she launched her line, she made sure all the straps were removable so women could wear them as belts or necklaces.

“It’s not a technique that manufacturers, at least in the U.S., know how to do,” Von Drenik said. “We’re trying to give the bags a unique look.”

As annual sales are less than $100,000, Von Drenik continues to freelance as an art director for ad campaigns as she grows her business. Her retailers include Roseark in West Hollywood, Calif., Wolverine in New York and Schreiner Goods in Kerrville, Tex. Expanding beyond the shrunken lambskin from her inaugural collection, she added lambskin that was painted to look crackled, deerskin suede and yellow calf hair for her spring lineup. Versatility still rules: The flap of a backpack can be zipped off to become a clutch, and a hipster-worthy fanny pack has a removable belt.

Needing to simplify manufacturing, Von Drenik tweaked her designs for spring so the bag straps can no longer be removed. In lieu of the multitasking cords, she created decorative bronze pins, such as an eye that features a rose for the iris and thorns for eyelashes, and also a hand gesticulating the peace sign atop a women’s body. Continuing the music motif, the peace pin was designed by renowned Fillmore poster artist Norman Orr, who happens to be Von Drenik’s stepfather. She also used bronze for handcarved caps to secure the braiding.

Like many designers before her, Laura O’Dell had a need, so she invented something to tackle it. For the working mom — who also works out — and designer and co-owner of The Odells, it meant filing a patent for a system of fastening the tops to the bottoms in her new activewear line. That way, the wearer doesn’t need to worry about exposing her midriff when she’s doing a headstand in yoga class.

“I wanted to blend function with fashion,” said O’Dell, who owns the brand, including its activewear offshoot dubbed The Odells Active and a young contemporary line called Porridge, with her husband, photographer Jason O’Dell. “It has this blouson effect so it’s fashionable when it’s on.”

Having received patent-pending status, O’Dell has a year to expand the system beyond the snaps that she initially proposed to adherents like magnets and Velcro. In the meantime, she is showing The Odells Active to retailers who might like the clever design combined with vibrant prints derived from photos of scenic spots in the Grand Canyon and Big Sur. Cut from a moisture-wicking polyester-spandex blend that offers UV protection, the seven bodies include a racer-back bra, zip-up turtleneck jacket, capris and shorts. There are also T-shirts, made of a Supima cotton-Modal blend, which have no wicking capability but come with the snaps along the hem.

The Odells is sold at specialty stores such as Blue Eyed Girl in Laguna Niguel, Calif.; A Hooper & Co. in Forth Worth, Tex., and Anthropologie. While Anthropologie plans to check out The Odells Active, many of The Odells’ other accounts don’t carry activewear, O’Dell said. Hence, she is targeting new retailers including yoga studios. She’s also making the workout gear available on the e-commerce site for Bucks & Does, the contemporary boutique the O’Dells run in Los Angeles. The activewear could grow to make up 15 percent of the total business, which has increased 150 percent from last year, thanks to demand for the silk and rayon separates in The Odells. “It’s a natural progression for the line,” O’Dell said.

Past stints as a design executive at Victoria’s Secret and Guess have allowed Sharleen Ernster to readily identify sex appeal. For the sportswear extension of her swimwear and lingerie brand, she’s giving it her own twist through, in her words, “this idea of versatile sexy.”

“There’s this whole niche market of women who are sexy in their own way,” she said, “but natural sexy.”

To appeal to these femmes fatales who don’t fake it, she anointed the demure colors of nude and blush pink as signature to her brand, with mint green and scarlet being palette perennials. Sublimated prints in the form of cheetah spots and Japonesque flowers give the collection visual pop. She ensures that all of her fabrics are stretchy and the designs are convertible to allow for a variety of women to wear them in multiple ways. For instance, she transforms stretch nylon mesh, trimmed with lace, into a strapless minidress that has a high-low hem and side ties that cinch the bust but are also long enough to double as shoulder straps.

“As a consumer, a fashion lover, it was frustrating that I was able to wear these expensive pieces one time and wasn’t comfortable,” Ernster said. “I want people to feel they invested in something they can wear every week.”

This investment doesn’t have to break the bank. None of her pieces require dry-cleaning. While a polyester chiffon minidress designed with a turtleneck, bell sleeves and leavers lace retails for $478, the majority of the jumpsuits, cropped turtlenecks and other 45 sportswear pieces sell for between $150 and $250. Reaching out to the same retailers that already have ordered her swimsuits — Scoop and Nasty Gal among them — Ernster estimated that swim and sportswear each will contribute to 40 percent of total sales, with lingerie making up the remainder. And all are interchangeable in a woman’s wardrobe.

Said the designer, “It’s important to me that we design a collection you can live your life in.”

Wray Cook is returning to her roots in California. Before starting her namesake contemporary brand in New York a year ago, the 31-year-old designer spent 11 years in the Golden State, first attending high school in Laguna Beach, then studying design at California College of the Arts in the San Francisco Bay area. This month, she’s presenting her easy-breezy separates in Los Angeles for the first time.

“There is something happening again in L.A.,” Cook said, “and I want to be part of it.”

In an appeal to local retailers, Cook strives to make everything accessible, a departure from the high-end looks she had designed for her previous fashion venture, Ambit, which she operated between 2009 and 2010. Besides cotton-linen blends, she also prefers working in silk and Japanese Modal for her clothes, which are manufactured in a family-run, fair-trade factory in India.

Both her ready-to-wear and swimsuits convey the circles and triangles dominating the architecture she spied on recent travels in Italy and Greece with her husband, contemporary artist Ethan Cook, who creates her prints.

“We were inspired by all of the shapes and lines,” she said.

For one print used on water-ready polyester tricot, triangles are color-blocked in fuchsia, white and light blue. Plus, a cotton-linen culotte jumpsuit features a V-neck that can be opened further by undoing the coconut buttons. She also incorporates triangular cutouts and circular panels into the designs.