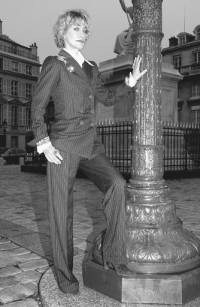 PARIS — A year ago, when legend Yves Saint Laurent told his intimates he would retire from fashion, Loulou de la Falaise, his muse and a chief creative consultant for some 30 years, found herself at a crossroads, as well.

“I used to think, ‘Well, maybe I should garden,’” de la Falaise recalls in her smoky, intoxicating voice, smiling wryly. “But when it actually happened, I instantly realized I wouldn’t. I realized I would do something.”

And how. De la Falaise is in the throes of building her own fashion house, literally from scratch, and racing against a deadline of Feb. 14, when she’s scheduled to unveil her signature line of ready-to-wear and accessories at a “small open house.” That’s Valentine’s Day, of course, underscoring that it’s a labor of love.

But she has a lot of work ahead. Offering a tour of her future boutique and headquarters at 7 Rue de Bourgogne on the Left Bank, de la Falaise picks her way across a construction site littered perilously with tangled wire, piles of plaster and bits of wood. But no hard hat for Loulou. Per her reputation as one of the world’s most chic women, she is dressed immaculately in her signature offhand way: a narrow-shouldered black sweater with a shirt collar peeking out, black trousers and a simple tasseled necklace with a jolt of jade at the bosom.

A few days later in her makeshift office on the site, she is dressed in gray flannel trousers, grosgrain-laced Christian Louboutin shoes peeking out from the cuffs, layers of brown jersey and piles of necklaces up top. A studied look? Hardly.

“I never think ahead about what I’m going to wear,” she says matter-of-factly. “I get out of my bath and then I dress. Sometimes, it’s a new pair of shoes and I work around that. But sometimes it simply depends on what’s at the cleaners and what’s around.

“I never think in terms of what’s fashionable or not. It’s totally instinctive. I’m actually terrible about thinking ahead. When people say, ‘What are you going to wear?’ — that gets me very nervous. When I throw things together at the last minute, I’m happy.”

That said, de la Falaise admits she feels the pressure of expectation as she readies her solo debut.

“I was very much pushed into it,” she explains in between back-to-back meetings with manufacturers and contractors. “Everyone expected me to do something — the social world, my friends.”

And Saint Laurent himself. “He’s very much the godfather,” she says, the affection plain on her face. “He drops by all the time with his dog Moujik. He’s very interested.”

After Saint Laurent staged his farewell show in January 2002, the garden may have beckoned de la Falaise, but she says she needed — and wanted — to continue working. Yet it never occurred to her to work for another designer.

“If you’ve worked for Yves Saint Laurent, it’s very difficult to work for another house,” she says, shrugging as a rhetorical gesture to his legendary status. “Plus I don’t think anybody would have wanted me. It would be practically like hiring him: The eye one’s got; the way we look at things.”

De la Falaise says launching a signature collection will give her the chance to express herself more freely, even if her past will influence her future designs. “I used my own personality when I worked at YSL, and I’m not going to chuck my personality away,” she says. “But there are also things I’ll do that I wouldn’t have done for Yves.”

De la Falaise — half French, half English — first came to Saint Laurent’s attention during the Swinging Sixties. Then an editor for Queen magazine in London, she was famous for her outrageous, extravagant style. When Saint Laurent hired her in 1972, her role was not clearly defined. Certainly one of the glitziest members of his entourage, de la Falaise was an ambassador, friend, confidante, party pal and a glamorous mascot for the house.

Her design responsibilities became formidable, however. She says she was involved in rtw, couture, “all those in-between collections,” as well as directing accessories and jewelry. For the last 10 years, she signed the couture jewelry collection. Counting the house’s various in-house lines and licensed collections, de la Falaise figures she designed more than 1,000 pieces of jewelry a year.

Her first collection will not be quite so extensive. De la Falaise plans to offer about 50 pieces of rtw, a yet-to-be-defined number of bags, belts and jewels, as well as a made-to-order service. An examination of preliminary sketches on the wall suggests a medley of updated classics: wide-legged trousers, bib-front tuxedo shirts, a halter top and ruffled cocktail dresses.

Although self-financed so far, de la Falaise admits to being flummoxed by the business particulars. A colleague she declined to identify is in charge of the business operation. In principle, de la Falaise hopes to offer a broad range of prices, from accessible to luxury levels. “I hope to be able to offer some things at about $100 or $150,” she says. “Unfortunately, it’s very expensive to do things in small quantities.”

Asked what customer she will be designing for, de la Falaise responds: “It’s a mixture of all the women in my family: my mother, my niece, my daughter, myself, attractive people I see around. It’s a lot of instinct, too. But it’s also based on a lot of experience and a lot of knowledge, because instinct without knowledge and experience is empty.

“It’s not going to be minimal,” she hastens to add. “I’m not a very strict person. I’m more of an extravagant type of person.” The boutique interior, being designed by her brother Alexis, will be similarly lavish. “There will be a lot of red,” she promises. “It’s my good-luck color.”

De la Falaise counts Colette and Maria Luisa in Paris and 10 Corso Como in Milan among her favorite shops, prizing them for their eclectic merchandise mix. “It’s quite nice to trail around a shop and hesitate between a brooch and a pair of shoes,” she says. “And where you can buy presents — eventually I’d like to do a few little things for men for while they’re waiting, or for presents.”

“I like Prada and I love Jil Sander. She was really good,” she continued. “I’ve always mixed a bit. Obviously I mix more now. It’s now or never, because afterwards, I’ll have to represent myself.” She stopped to laugh, then added. “I’ll keep on mixing because it’s more inspiring.”

When Saint Laurent announced his retirement, he confessed some misgivings about the state of the fashion industry. De la Falaise offers some elaboration.

“I think what Yves objected to most was advertising that verged on pornography,” she says. “He’s always had a respect for women, and for him it’s like seeing them defiled.”

De la Falaise says she shared his opinion, although she says she has no objections to the controversial “Full Monty” ad for M7, Ford’s new YSL fragrance for men. “I happen to like the photography,” she says. “But I think fashion goes through phases. I just wait for them to be over.”

Asked if there are any misconceptions about her, de la Falaise reflects and confesses that some might find her imperious around the subject of style. On the contrary, “I’m not in the least judgmental and I’m not in the least didactic,” she says. “People should wear things that suit them rather than follow fashion.”

So, is there anything de la Falaise considers an absolute fashion don’t?

“Well, I wouldn’t wear clogs,” she says, laughing, before pausing to think if there’s anything else. “Oh, yes, and those things with the straps: overalls. But apart from that, I don’t know.”