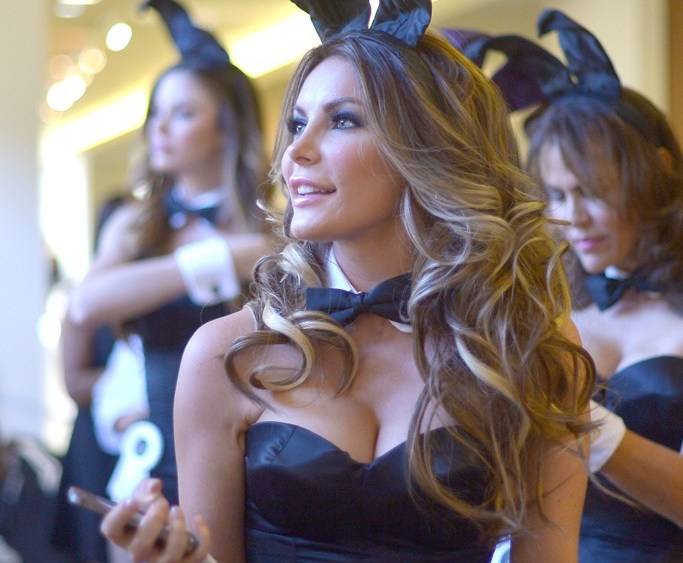 The 28-year-old model-turned-entrepreneur will launch her first collection of loungewear for holiday selling. The namesake line will include 12 dual-purpose pieces with an active look that can be worn at home, at the gym or to grab a cup of coffee at Starbucks.

The launch is the product of a partnership between Hefner and actress-turned-lingerie designer Rhonda Shear, who is codesigning the line. Shear is best known as the creator of the Ahh Bra and former host of USA Network’s “Up All Night” television series in the Eighties and Nineties.

Hefner, whose loves include lingerie as well as her 88-year-old spouse, says the loungewear is based on her personal wardrobe.

“The collection is inspired by a lot of stuff in my closet, mostly leisure loungewear items,” said Hefner. “It has a fresh, ath-leisure look, something to me that’s really exciting because a lot of loungewear in stores is geared to older women.…It’s stuff I would wear to Starbucks or the gym.

“There will also be lace elements and chiffon detailing, items that are very comfortable and appealing to the eye. We’ll also be doing men’s and women’s lounge socks that have a marshmallow feel for holiday,” added Hefner.

Lounge styles will include soft bralettes, camis, pajama sets, bed jackets, robes, shorts and a variety of pants such as harem, sweat and yoga styles in sizes SM to XL. Fabrics will include baby-soft terries and seamless cotton blends. Suggested retail will be $20 to $60. Colors will include bright peach and lime as well as pastels.

Distribution will be aimed at major e-commerce sites and a launch date on a “big shopping channel” will be announced in the near future, said Shear, whose Rhonda Shear intimate apparel is sold on HSN.

A first-year retail sales projection was not available, but the loungewear could generate sales in excess of $10 million, according to industry estimates.

“I met Crystal at a Playboy Mansion party, where she told me she looked up to me and wanted to do a loungewear line. Hef is very excited about this and he lets her do her own thing,” said Shear. “She’s a major fan of Disney and has a very fun, sweet, girly personality. Today, a lot of things are based on social media and Crystal has millions of Twitter followers.”