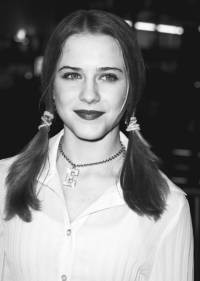 LOS ANGELES — As a seven-year-old, Evan Rachel Wood may have lost a juicy role in “Interview with the Vampire” to Kirsten Dunst, but at the ripe old age of 15, it seems that Wood’s time has come. The actress, best known for playing Billy Campbell’s moody daughter on ABC’s “Once and Again” and Al Pacino’s offspring in “Simone,” gives a breakthrough performance as a troubled teen in “Thirteen,” which was the toast of the Sundance Film Festival.

“I’ve actually been to Sundance before, for ‘Digging to China,’” she says, “but I was only nine. This time, it really hit me that everyone in the industry is here, and everyone’s going to see me.”

Wood, a native of Raleigh, N.C., moved here when she was nine with her mother and older brother Ira, also an actor.

“Thirteen,” she says, is her most emotionally intense role yet.

“I play Holly Hunter’s daughter and it’s like playing five girls. At the beginning she’s still wearing elementary school clothes and by the end she gets completely corrupted, until finally she hits rock bottom and everything goes wrong and blows up in her face.”

Wood’s own teenage turmoil came in handy for the role. “I’ve witnessed and gone through a lot of the same things,” she says. “Instead of dredging up old wounds, it was like coming to the set with an open wound.”

Of course, Wood’s on-film persona was much more extreme. “Nobody has ever seen that side of me. It was bad enough having to watch the movie with my mom,” she says, “but my brother just had his head in his hands the whole time. I have to tell my friends to brace themselves.”

Attention casting directors: Wood thinks the perfect antidote to all that angst would be a comedy project. “I don’t want to be known as the misery chick,” she says. But no matter what part she takes next, with Jodie Foster as her role model, Wood plans to take a break.

“It is pretty easy to lose yourself in Hollywood,” says Wood. “I try not to grow up too fast and I still do things I did when I was little.” Those pastimes include singing, horseback riding and hip-hop dancing. She’s also a black belt in tae kwon do.

“I’m the biggest ‘Lord of the Rings’ fan ever,” she adds, “and I’m a little obsessed with Nirvana at the moment.”

But she’s not obsessed with fashion just yet. “I don’t really worry too much about clothes,” says Wood, a typical jeans-and-tees kind of teen. “And does anyone really care about what kind of products I put in my hair?”

A PERUVIAN IN PARIS: Tenor Juan Diego Flórez hit all the high notes — and then hit some more — at a private concert last Saturday night at the Peruvian Embassy in Paris, hosted by Ambassador Javier Pérez de Cuéllar and his wife, Marcela.

After tossing off a string of bel canto favorites — including Donizetti’s perilous aria, “A Mes Amis” from “La Fille du Regiment” — Flórez offered some traditional Peruvian songs as an encore, honoring a shouted request for “Bella Enamorada.”

Enamorada would, in fact, aptly describe many of the grandes señoras in the audience.

“He’s so good-looking you want to go up and hug him,” whispered Met Opera doyenne Cécile Zilkha, who allowed that Flórez was also an exceptional singer.

Marcela Pérez de Cuéllar, as hostess, had full diplomatic immunity to do just as Zilkha suggested — and she did.

It’s just that she jumped her cue a bit.

“I was so excited I ran onstage,” she said later, “and I forgot they were filming him.” Flórez, who just sang “La Cenerentola” to rave reviews in London, is currently being filmed and recorded by Decca for an upcoming release.

After the performance, the 90 guests — a real slice of Le Gratin, or Paris’ golden upper crust, including Guy de Rothschild and the wife of the U.S. Ambassador, Gretchen Leach — mingled and sipped the house drink, a Pisco Sour.

“They go straight to your head,” cautioned Lily Safra. “I know. I tried them before.”

Linda Wachner also abstained, since alcohol is not allowed under her new diet plan. (Lest anyone doubted it, diets, like facelifts, are no longer society secrets, but open for discussion.)

“Am I thinner?” Wachner asked, upon greeting one friend. Everyone agreed that she was in fine form — JAR earrings are so slimming — and prompted her to share details of her diet and exercise regimen. It includes vigorous perambulations around Paris that give new meaning to the term power walking. A male friend, who walked with her, reported that Wachner strides like a colossus straight across Paris’ traffic-jammed streets, practically daring those tinny Euro-mobiles to hit her.

“I’d ruin a Volkswagen,” she joked, pooh-poohing her bravery. “It’s a Mercedes you have to watch out for.”