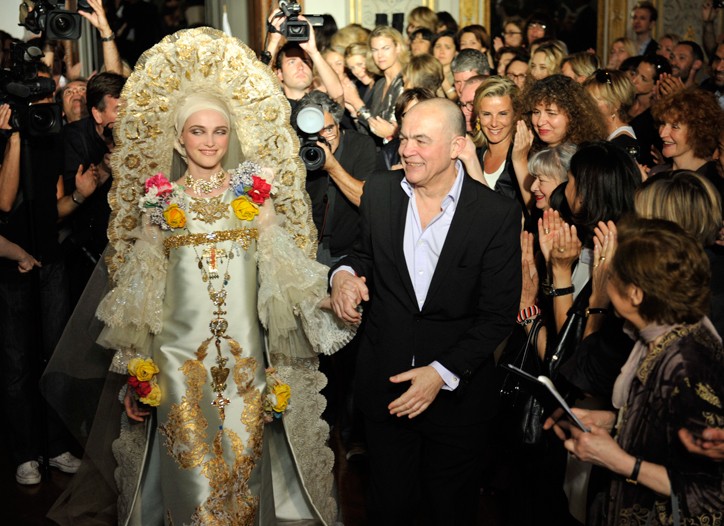 Slammed by the global economic crisis, the high-flying luxury sector lost altitude in 2009, shedding billions in sales, forcing bankruptcy filings and layoffs galore and ushering in a new set of rules with the word “value” inscribed at the top.

Roughly 14 billion euros, or $20.78 billion at current exchange rates, in luxury sales evaporated this year, according to Bain & Co. estimates, as high-end consumers kept their pocketbooks shut and the term “luxury shame” entered the popular lexicon. Any splurges likely took place at home in front of a computer — keeping online sales humming — or goods were toted home in plain brown bags.

A host of famous fashion and luxury players, including Escada, IT Holding, Viyella, Waterford Wedgwood, Yohji Yamamoto and Christian Lacroix, sought court protection from their creditors. Most of those companies found ways to continue. However, acclaimed couturier Lacroix saw a Paris court approve a plan to reduce his fashion house to a licensing operation, ending its high-fashion activity and leaving a gap in an increasingly threadbare couture calendar come January.

A wide swath of companies was forced to renegotiate financing or reduce headcounts to meet a steep fall in demand in high-end products. In late October, Versace said it would cut 350 jobs, about 25 percent of its workforce, in the Italian firm’s bid to return to profitability in 2011.

Companies including Burberry, Cartier, Chanel, Luxottica, Prada and Swarovski either laid off or temporarily idled workers due to the recession.

The Swiss watchmaking industry also spent the year licking its wounds amid massive destocking by retailers. Zenith, Franck Muller and Metalor were among firms that announced job cuts.

Humbled by the harsh economic climate, especially in the U.S. and parts of Europe, luxury firms shifted their attention to emerging markets, including fast-growing Asia, and pursued consumer-focused events in a bid to encourage spending.

Tactics ranged from standard trunk shows and giveaways to temporary stores and limited edition products to break through what executives described as a psychological barrier to discretionary spending.

“There are still people with money, but we have to talk to them differently,” Valérie Hermann, chief executive officer of Yves Saint Laurent, told WWD in April.

“Our philosophy is if you are in the true luxury business, the way to talk to customers is one-to-one,” agreed Patrick Thomas, ceo of Hermès International.

Strategic consultant Concetta Lanciaux, speaking at the Luxury Briefing conference in November, said the economic crisis — which wiped out billions in disposable income among the wealthy and middle-income classes — has compelled all players to return to such core values as heritage, quality and aesthetics, with functionality and individuality among important new characteristics to trumpet. She argued that aspirations for luxury remain strong, but with a “connoisseur” approach, and higher expectations.

“The reality is consumers will be more demanding,” agreed Pierre-Yves Roussel, ceo of the fashion division at LVMH Moët Hennessy Louis Vuitton. “People are looking for meaningful consumption. We don’t have to find gimmicks. We just have to be true to what fashion and luxury is really about.”

Others viewed the crisis as a wake-up call for innovation.

“Luxury goods firms need to start playing the wild card,” Jeffrey Miller, a New York-based consultant and cool hunter, said at the Luxury Briefing. “Pop-up stores are just the beginning of what I am talking about. What they need to do is create a ‘department of surprise.’ They also need to decide who they are, refine their messages, clean up their acts and become ‘evolvers.’

“There is so much resentment toward the government, toward banks, toward the overblown luxury market,” Miller continued. “The new paradigm is about, ‘How can I help you?’ rather than ‘What can I sell you?’ Luxury in particular has to watch that it does not suffer a backlash from the aftereffects of ‘affluenza.’”

To be sure, “value” became the new industry buzzword, with interest spiking in lower-price categories across most segments of the industry, from jeans and leather goods to designer apparel.

“The crisis has increased the focus on discreet consumption and the price-to-value relationship,” stressed Patrizio di Marco, ceo of Gucci.

“What the customers are asking today is, ‘Is it worth what it costs?’ and, ‘Can I buy it for less?’” Lanciaux said, citing the popularity of no-frills gourmet restaurants as an expression of the new consumer sentiment.

Stefano Gabbana and Domenico Dolce took the lead, shaving prices by between 10 and 20 percent for their main and D&G lines, effective with the spring season.

The denim market also snapped to attention, pitching the concept of premium quality at less-than-premium prices with the $80-to-$120 retail price range seen as the market’s new sweet spot.

Karl-Johan Persson, the new ceo at Sweden’s H&M, said the crisis compelled many people to visit its stores and discover its concept of fashion at a price. “So I think that will stick, actually,” he said.