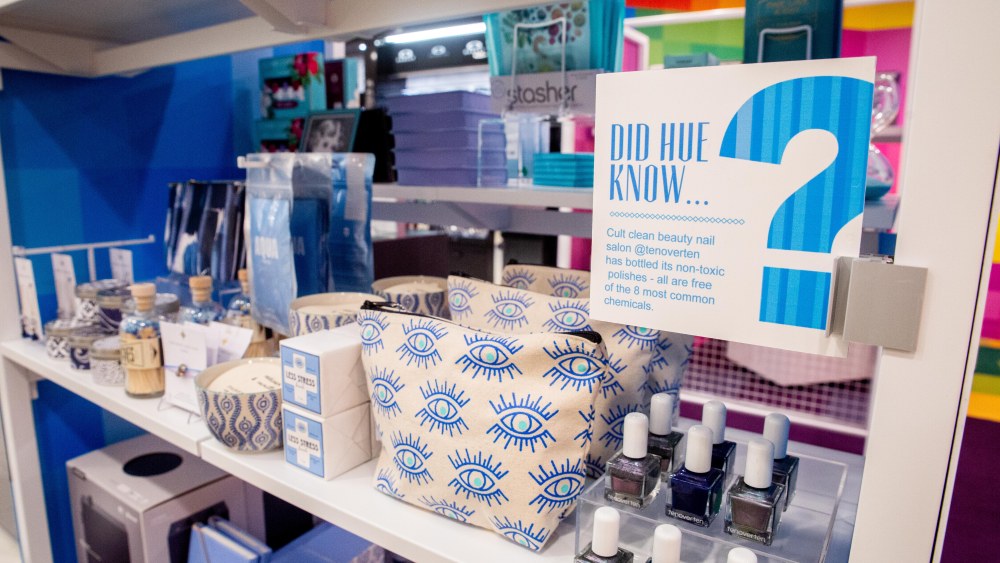 Macy’s Inc., in one of its most innovative maneuvers to date, has launched “Story at Macy’s” concept shops at 36 of its U.S. locations.

The shops will average 1,500 square feet in size; have customized, flexible fixturing, and, similar to the original Story store at 144 10th Avenue in the Chelsea section of Manhattan, will change their merchandise theme, products and decor every two months. For the inaugural Story at Macy’s, the theme is color and the shops will sell at least 70 vendors, primarily small ones, and display an eclectic range of more than 400 items for men, women and kids.

The sale of Story to Macy’s was a surprise move considering Macy’s has lately been more into streamlining than acquiring, though the deal reflected the department store’s intention to bring new experiences and products to its selling floors. When Macy’s bought Story (for an undisclosed amount), Shechtman joined the company as brand experience officer, to help devise new customer experiences and integrate Story as a format for the store. Over the last few years, Macy’s has established Backstage off-price departments and the “Market @ Macy’s,” where a handful of brands not typically carried at the retailer can sell their products for a temporary time, like a pop-up, while the space is manned by Macy’s personnel. The retailer also has a partnership with B8ta, which sells the latest electronic gadgets, and has opened At Your Service counters inside all of its doors for order pickups, returns and other services.

“Story is not going to move the needle,” Jeff Gennette, Macy’s chairman and chief executive officer, said in an interview with WWD, adding that much of the Story merchandise is more of the impulse-buy ilk, rather than of necessity, and that there’s a good amount from small vendors not previously carried by Macy’s.

But Gennette emphasized how Story would benefit the customer experience and the Macy’s management’s mind-set, as well as traffic.

“Number one, it’s fun and unexpected,” the ceo said. Second, “It’s a magnet to attract new partners and generate new ideas.” Third, Gennette said Story should encourage repeat visits to the store by existing customers and attract new ones. And finally, he said Story is an impetus for the Macy’s team to be more agile, faster and open-minded about processes. He noted it took only eight months to create a Story infrastructure and launch the concept in the 36 stores.

The challenge will be to maintain the spirit and individuality of the Story brand while under the umbrella of a corporate enterprise.

“Bringing Rachel’s perspective to the table will help create more enriched and engaging in-store experiences and brand activations,” said Gennette. “We are committed to growth in 2019, and this is one important step along the way.”

Shechtman emphasized there’s been plenty of work behind the scenes in integrating the two disparate businesses, including staffing up and creating systems to accommodate small vendors “on-boarding” to the $25 billion Macy’s juggernaut.

“It’s been a complicated project,” Shechtman told WWD. “We have been reimagining lots of systems and processes to make it easy for small vendors to work with big companies and for streamlining the on-boarding process. This has been so hard in terms of all the processes. But we are coming out of the gate with an infrastructure.

“The idea behind the launch and opening with 36 stores across the country is to really focus on making sure we cover communities across the country.…Another vital thing is to deliver an amazing narrative-driven experience for our customers,” she said.

A Macy’s Story team was created with managers at the 36 doors, regional managers and more than 250 part- and full-time sales associates, who are being called “storytellers.” They participated in a “know and tell” training program to learn about everything from building fixtures to customer engagement and event production. Among those joining the team is Jenny Shechtman, who was Story’s chief operating officer and is now vice president of operations for Story at Macy’s. She’s Rachel’s sister.

“Herald Square is kind of an anomaly,” said Shechtman, explaining that at the New York flagship, Story occupies 7,500 square feet, with space on the main floor and on the mezzanine and with an event area. The shop is roughly five times larger than other Story shops at Macy’s stores, and there will be products from about 110 vendors at the Herald Square Story shop, rather than the 70 or so at other locations.

“We didn’t do the deal just to go small with it,” said Macy’s president Hal Lawton. “We want it to be part of the Macy’s experience.”

Lawton said Story has been given “A-plus” spots in the 35 other Macy’s locations, mostly on the first floor of the stores and by escalators and entrances. The other locations are among the retailer’s top-performing units, including regional flagships and so-called “magnet” stores.

During the interview, Shechtman was reluctant to reveal future themes for Story at Macy’s, though she did say one possibility would be “home for the holidays.” It’s been done before at the Story store in Chelsea. Color was also a theme previously presented at the Story store, though Shechtman said it made perfect sense to revive it for the much wider Macy’s audience and that it was particularly appropriate this time of year. “It seemed like a perfect narrative. It’s springtime.”

Going forward, “there’s no shortage of ideas” for Story at Macy’s, she assured. She said Story at Macy’s will deliver concepts through “unique collaborations, narrative-driven merchandising and dynamic event programming.”

Story at Macy’s will not be selling any of its product online, though there’s a dedicated web site, macys.com/Story, with information on the shops and their events.

For the color theme, Levi’s Kids, which is manufactured and distributed by Haddad Brands, as well as Crayola and MAC Cosmetics, are sponsors. Through the sponsorships, Macy’s picks up another revenue stream through sponsorship fees, in addition to the merchandise sales. Meanwhile, the sponsors obtain greater exposure on the selling floors and with marketing.

“It’s fresh, new and experiential and it will definitely be a draw,” said Sam Haddad, principal of Haddad Brands, which also manufactures and distributes other kids’ merchandise under such labels as Nike, Hurley, Jordan and Converse. “Creativity is cool. It creates more excitement for people to stores.”

For Crayola, Story marks its entry onto Macy’s selling floors. Crayola’s Warren Schorr, vice president of business development and global licensing, said his brand’s program for Story at Macy’s offers products for tweens, teens and adults and provides an introduction to various “unexpected” Crayola products like Pearlescent Paint Markers. The paint is removable if you accidentally get some on your clothes.

“When Rachel came up with the Color Story for Macy’s, she figured who else should she partner with other than Crayola. It was an immediate fit,” said Schorr. He said the arrangement with Macy’s reflects “elevating the Crayola brand for an older consumer and higher tier of retail.” Crayola traditionally sells at mass merchants like Target Corp. and Michael Stores.

Among other products for the color theme, Story at Macy’s will sell an online kids’ brand called Primary, marking the line’s national debut, and gourmet chocolate bars and doughnuts from Compartes, a Los Angeles-based chocolatier. There’s also a compact mirror and phone charger from Hyper by Sanho; a glitter clutch purse by Julie Mollo; bath bombs from Da Bomb; “No Tie” shoe laces by Hickies, and a collapsible pocket cup by Stojo.

MAC will have a “make-your-own” palette station at most Story at Macy’s shops and will stage beauty classes with makeup artists. Overall, events and classes for the color-themed Story shops — more than 300 events are scheduled — will focus on self-expression and creativity, Macy’s said.

Standing by the MAC counter in Story was Chris Good, group president, North America, The Estee Lauder Companies. Story at Macy’s is serving as a launchpad for MAC’s concept for customizing and monogramming lipsticks and eye palettes. “This give us an opportunity to test and learn and ultimately decide to roll it out,” Good said. “It’s so important to try new things and engage with consumers in different ways. Macy’s has clearly embraced the concept. They are devoting significant space and it’s incredibly colorful.”

For Wednesday’s launch at the flagship, Macy’s pulled out all the stops, with hundreds of guests — primarily vendors, media and Macy’s top brass — arriving about an hour before the store opened to the general public.

Story at Macy’s Herald Square is mostly situated on the mezzanine level, between Starbucks and men’s wear. It’s a section that typically has a good flow of traffic.

Though up on the mezzanine, Story at the Herald Square flagship can’t be overlooked. It’s flagged with displays in the 34th Street windows, giant Story mobiles on the main floor, a large video monitor with the Story campaign situated between two escalators, and additional merchandise displays on the main floor.

David Stark has designed the first Story at Macy’s shop, which is merchandised by color. Floor carpet tiling matches the colors of the merchandise, so for example, pink merchandise is displayed above pink flooring. The setting is animated with a giant interactive Lite-Brite experience produced by LiteZilla and an illuminated rainbow tunnel — an Instagrammable moment — on the main floor featuring colorful Tetra Contour technology from Current. Custom fixturing was created by Alu, based in Italy. It’s in white and can be changed out in ways for future Story merchandise themes. The color theme runs through June 26.

There’s a message that went up in the Chelsea store on Wednesday, signed by Shechtman and others, spelling out the concept’s short but “storied” history, indicating 42 original stories, 5,000-plus small business vendors, and 600-plus events. “Because of you, Story became more than a place. It became a patchwork of people and a gathering place for the community we love so much,” the message read.