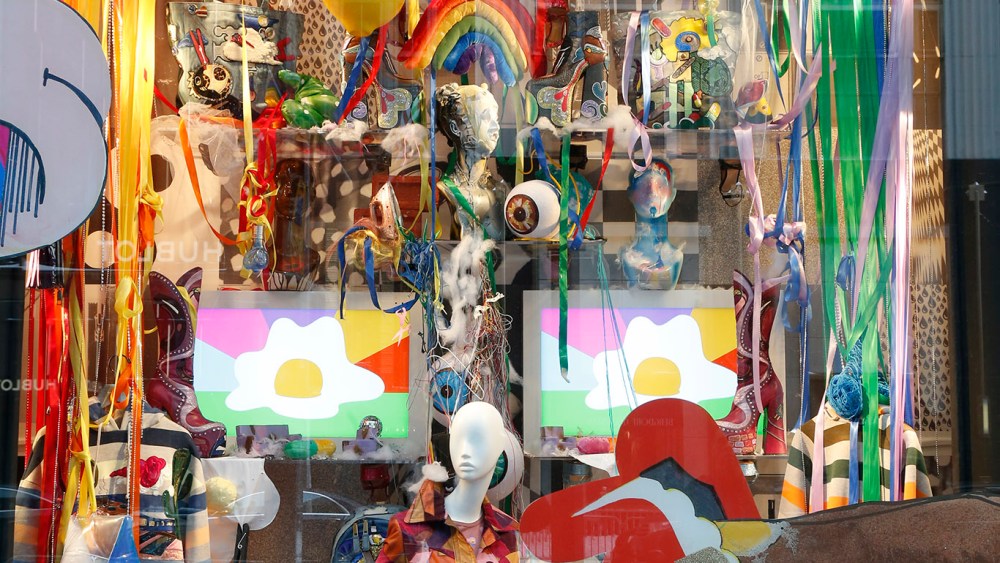 NEW YORK — It was difficult for Julie Verhoeven to find the words to describe the Marc Jacobs pop-up shop she was scrambling to finish at 4 p.m. Wednesday on Bergdorf Goodman’s fifth floor.

“It’s a lot of nonsense, really,” she said. “It’s a bit trashy. The way I’ve made things quite crappy.”

Those are not words typically associated with Bergdorf’s, the holy grail of luxury shopping in New York, which was exactly Verhoeven and Jacobs’ point. “I quite like the idea of coming into a department store and messing it up a bit, destroying the luxury in a way and presenting the products in a slightly trashier environment. It makes them look more precious in a way,” Verhoeven said.

The 200-square-foot pop-up space and window, opening today until March 30, is devoted to her and Jacobs’ spring 2017 collaboration of patchwork collages, including a dress with a vacuum cleaner embroidered on it, a denim jacket with pill-shaped patches and a scarf printed with red lacquered fingernails spritzing perfume and a garbage can.

The temporary space is inspired by Jacobs spring runway show, for which he enlisted “Julie to create all of these great patchworks and embroideries,” Jacobs said. “There are pieces of it everywhere. Hairdryers, castles, rabbits, lips, rainbow-colored teeth and a skyline for New York.”

“All of us were transfixed by the spring Marc Jacobs collection, with its psychedelic yet whimsical collages on the ready-to-wear, handbags and shoes,” said Joshua Schulman, president of Bergdorf Goodman. “After the show, we immediately asked the Marc Jacobs team if Marc and his longtime collaborator, artist Julie Veerhoven, would consider doing a pop up in store and online at Bergdorf Goodman so that we could share our enthusiasm for the collection with our customers.”

Jacobs previously collaborated with Verhoeven in 2002 for Louis Vuitton and they’ve also worked together on a special addition Marc Jacobs Beauty set.

As for Verhoeven’s favorite part of the display? “I’m quite happy I’ve got the pills in there,” she said. “They’re all scattered on the floor; it’s ended up looking like the end of a party — not a nice party.”

She described the concept as a visual onslaught, taking the madness of the spring show a step further, with layered collages that set the merchandise in rainbows, a giant lemon lightbulb, a propeller made out of hairdryers and even those notorious wool dreadlocks.

“They’re no longer dreadlocks, they’re balls of wool on the floor,” Verhoeven said. “There’s tons of references [from the show] in there but we took it a step further and really let it rip, and we really don’t care.”

For more on Marc Jacobs and Bergdorf Goodman, see: