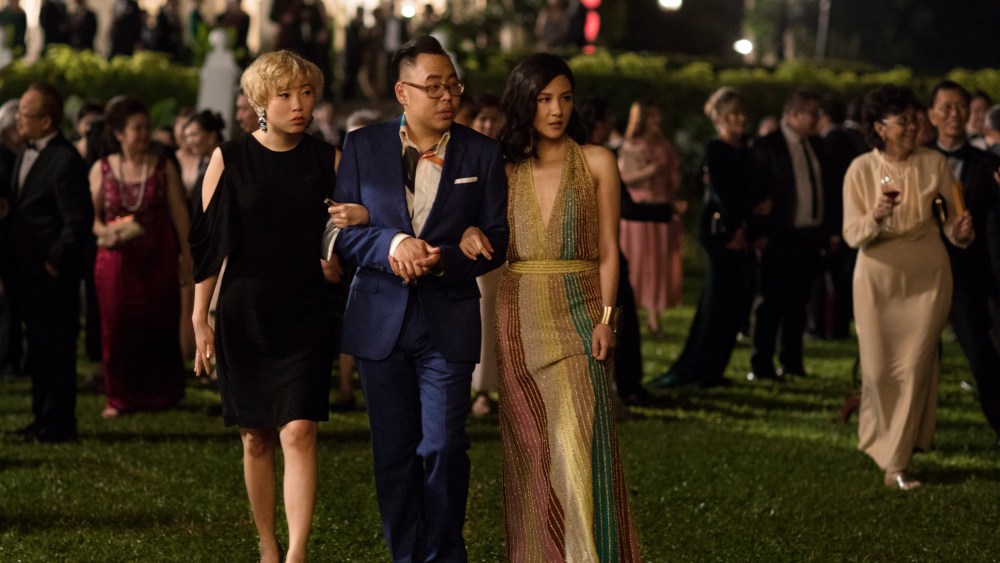 Los Angeles-based costume designer Mary Vogt had to shift up a gear dressing the big — and colorful — cast of “Crazy Rich Asians,” the new film that’s based on the best-selling novel by Kevin Kwan.

The cast donned a bevy of luxe looks “reflective of the demarcation between old and new money,” and one of her challenges was to ensure that everyone in the cast, including Constance Wu, Michelle Yeoh, Henry Golding and Gemma Chan, stood out as individuals.

Related: The Passions and Politics of Constance Wu

Vogt, whose costume credits include “Hocus Pocus,” “Batman Returns,” “Son of the Mask” and “Men in Black,” talks about how she used a rainbow of color, a smattering of neutral tones — and a lot of gold jewelry:

WWD: How did you prep for “Crazy Rich Asians”?

Mary Vogt: Besides reading the script, I read Kevin’s first book, “Crazy Rich Asians.” I’ve known [the director] Jon Chu and he talked about the look and tone that he wanted for the film. And because I’m not Asian, I was like, “I’ve got to do some background research just to get the tone right.” Jon introduced me to Kevin and we talked a lot. He actually sent me pictures of his family, his ancestors from China and his grandparents.

We didn’t want the fashion to get in the way of the characters, which can happen, so the characters were always the most important thing in the movie. Most of the things were pulled from designers, but I designed a few things, including the wedding dress and the gold jumpsuit for Araminta [played by Sonoya Mizuno] and then I also tried to use a lot of local designers from Singapore, to try to get a little more flavor of where we were. There are wonderful designers in Singapore.

WWD: What were some of the other must-haves for the wardrobe?

M.V.: Color was really important. It’s a comedy, but with more of like a rich color, but not primary colors, more saturated ones. First we started off in New York where we decided to do black, white and gray, like more toned down, earth colors. When we went to Singapore, it was like this explosion of colors, so that’s what we ended up doing. And it was a big cast, like 20 people, and everyone was important. It’s hard when you have that many people to keep them all distinctly different, so that’s what we tried to do. And Kevin was a huge inspiration, and it was very unique.

WWD: What brands and designers did you end up working with?

M.V.: In Malaysia, most of Henry Golding’s [who plays Nick Young] clothes were custom-made. They had some wonderful bespoke tailors in Malaysia. Internationally for the men, Ralph Lauren, Dsquared2 and Dolce & Gabbana were very helpful to us. For the women, we used a lot of Dior, but if I used one designer on one character, I didn’t use it for another. For Gemma’s character, Astrid, she wore a lot of Dior and Valentino, and I also have a Diane von Furstenberg dress that looks very good on her. And then Goh Peik Lin [played by Awkwafina] wears Stella McCartney and there’s a local designer called Chi Chi Von Tang that she wore some clothes from. It was sort of all the usual suspects in designers for the characters, but none wore the same designer. Elie Saab, Marchesa and Ralph & Russo were very nice to us and they actually lent us some gorgeous dresses.

WWD: What was your style inspiration for dressing the role of Rachel Chu, and how involved was Constance Wu in how her character was dressed?

M.V.: Constance was involved in practically every scene in the film. It was very important to her how the character was presented. And she was, like, the most grounded character in the movie. She comes into this world of old money and then new money. So, in Singapore we had two very different looks. Peik Lin’s family was new money and so they were much more Versace, wore brighter colors, a little more gold, and a little more new money looking. And then Michelle Yeoh, her character’s family was more old money, so it was richer colors. But Constance was sort of the grounded character, so she was more like Ralph Lauren, you know more American looks and not such bright colors. She was very involved in her look, absolutely, and she looks distinctly different from everyone else in the film. Kevin felt that she was very grounded, that she wore light colors, wore lots of linen when she went to Singapore. That she looked like an all-American girl, a little bit like a fish out of water going into this other world.

WWD: What was your style inspiration for the character of Eleanor Young, and how involved was Michelle Yeoh in how she was dressed?

M.V.: I remember the one thing that Michelle said was that she didn’t want to come off like a one-dimensional character, like the mean mother. She wanted to be a more complex character because Michelle is a very interesting and complex actor. She wanted people to understand that her motivations weren’t out of nastiness, but that there was more to it — like family tradition. So, for her there were designers like Giorgio Armani and Carolina Herrera.

WWD: What was your style inspiration for dressing the role of Nick Young, and how involved was Henry Golding?

M.V.: Well, this is actually one of the first movies that Henry has ever done. So he was just so excited to be in the movie, and he was just a natural. So, very naturally elegant and stylish, and he looks just as good in a T-shirt and shorts as he does in a tuxedo.

Whatever you put on him looked bespoke, but that’s what Kevin wanted. He wore very elegant, classic, bespoke clothes. He didn’t buy clothes, he always had very elegant, clean, stylish clothes. With Henry it was effortless. Everything he put on, he brought this amazing style. And his stuff was made in Kuala Lumpur, although I did find that Dolce & Gabbana he fit into like a dream — like you didn’t need to put one alteration.

WWD: Can you talk to us about outfitting the supporting roles?

M.V.: I was dressing everyone so that they had their own distinct character, and they didn’t compete with the other characters. You could tell them apart because when you have so many faces on film, people just don’t remember them because there’s too many. So, we’ve tried to keep them separate, and keep them simple, keep them not competing with each other on film.

WWD: What was a typical day working on the set like for you?

M.V.: I’ve never worked with such a big cast and they were crazy about each other. They all got along so well. They were just so happy to be doing this movie, and they made it so nice for everyone. Because normally on film sets there can be tension about different things. People were just so happy to be there that it just infused the whole atmosphere of the movie with this joy, which is not usual.

WWD: What are some of your favorite bits of the film?

M.V.: I think the characters are just so wonderful. Constance’s character is just so wonderful with her relationship with Michelle Yeoh, Henry and Awkwafina, her best friend. Then the local mean girls are great.

WWD: Can you tell us about upcoming projects and plans?

M.V.: The film that I’ve just done is called “Flarsky” with Charlize Theron and Seth Rogen, and they were just a pleasure. It’s a comedy, and I’ve never worked with Charlize before and after working with all these beautiful actors on “Crazy Rich Asians,” then to work with Charlize, I was like, “Oh my God, another gorgeous person,” I’m working with these super people. So, with my next film, if people aren’t lovely, nice and absolutely beautiful, I’ll be like “What’s wrong with you?”