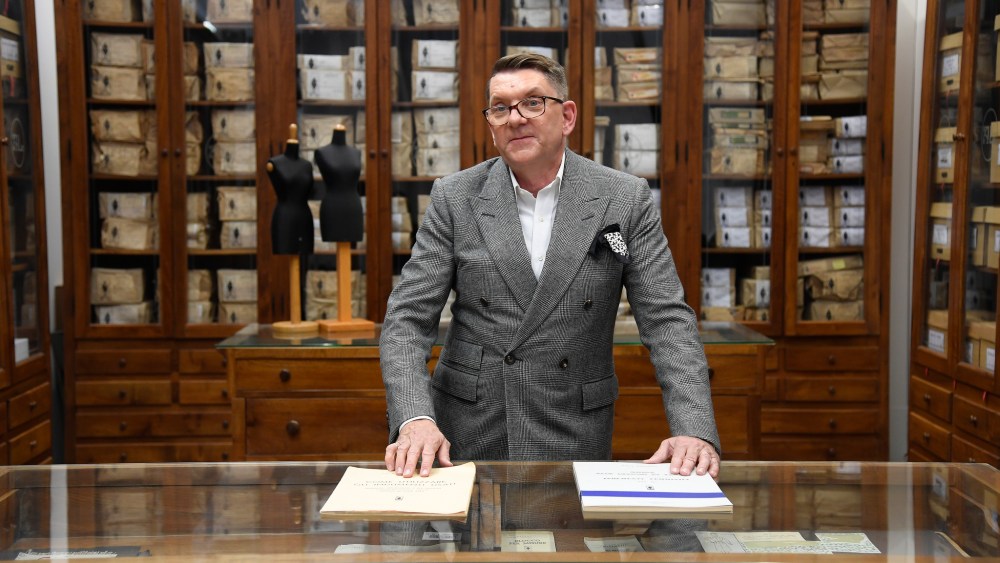 REGGIO EMILIA, Italy — Metaverse, augmented reality and artificial intelligence are all of-the-moment and photography is available to anyone at any time through any mobile device. But for Ian Griffiths, creative director of Max Mara, sketches remain a key part of his design process and not at all a thing of the past.

“Through the sketch, I perceive the intention of the designer, his or her spirit, which sometimes you don’t see in the final outfit, so sketches are fundamental to retrieve their original intention,” said Griffiths.

The pool of sketches archived by the Max Mara group is a treasure trove, painstakingly detailed, with swatches of fabrics attached and — in many cases — bearing founder Achille Maramotti’s handwritten notes. “These sketches are documents that summarize the silhouettes, the fabrics and the details,” said Griffiths.

As Max Mara’s 70th anniversary this year winds down, the British designer took time to give WWD a tour of the company’s library and archives in a former hosiery manufacturing plant dating to 1910 in Reggio Emilia and restored in 2015. They cover three floors over 43,200 square feet and include 300,000 pieces, sketches, photos, ads and furniture, carpets, desks and paintings from old offices and stores, 350 magazines and 600 boxes of fabrics. There is also an invaluable vintage collection of 8,000 designs and accessories from brands donated by private collectors, such as Carine Roitfeld, which document the evolution of fashion from the 20th century.

The daughter of one of Max Mara’s first retailers, Laura Lusuardi, who is fashion director of the group’s labels, which include Sportmax, Marina Rinaldi and Pennyblack, to name a few,  joined the house in the ’60s, and helped put together the archives, also buying back designs during her travels around the world, acquiring looks from Chanel and Madame Grès to Courrèges and Yves Saint Laurent.

Over the years Max Mara has worked with such marquee names as Karl Lagerfeld, Domenico Dolce and Stefano Gabbana, Jean-Charles de Castelbajac and Narciso Rodriguez. But, in line with Max Mara’s understated style, the brand took center stage and the designers’ names never appeared — until Ian Griffiths, who joined the company in 1987, fresh out of the Royal College of Art, and a winner of a Max Mara context in 1985. In 2005, with the blessing of Max Mara’s owners, the Maramotti family, Griffiths began to emerge as the lead designer of the brand.

“I was so honored, and it makes the brand’s narrative much richer when there is this kind of conversation,” he said.

Actually, Achille Maramotti was a pioneer in understanding how important it was to build what today is called a database and communicate with the press and the brand’s customers. Flipping through copies of archived magazines, such as Arianna, which Anna Piaggi helped successfully develop, Griffiths recalled how each season, readers were invited to judge 50 numbered Max Mara looks, which allowed Maramotti to store information about these readers, who were asked to provide their addresses.

“Their responses were very indicative of the women he wanted to attract,” said Griffiths, showing an article on divorce, which was surprisingly inferring that “it wasn’t always the woman’s fault. This revolutionary tone of voice was embraced by Achille Maramotti, who was interested in feminism — not of the bra-burning kind, but in dressing an intelligent and modern, middle-class woman. He wanted to create the perfect outfit not for one woman at a time but in series, which was something nobody had thought about before.”

And he talked to customers to explain the then-innovative concept of ready-to-wear.

Inspired by the styles of legendary French couturiers, Cristóbal Balenciaga and Christian Dior in particular, Maramotti tweaked their designs with precise tailoring, clean silhouettes and lean proportions toward a more Italian fashion sensibility that was Max Mara’s signature.

The camel coat, which has become a brand staple, “was a symbol of male authority and was revisited for women,” said Griffiths.

Coat designer Anne-Marie Beretta was instrumental in the 1980s in delivering avant-garde shapes and cementing the success of the camel coat.

Along with her sketches, Max Mara has meticulously saved illustrations by Norma Robinson, Lagerfeld, Emmanuelle Khanh, de Castelbajac and the other designers who have contributed to the brand’s success.

“It is interesting to see how the sketches are translated in the actual outfit, when you compare them with the final result,” he pointed out.

Griffiths also recalled how Maramotti pioneered the concept of capsule collections, asking then-“It” girl and Dior model Lison Bonfils to design a capsule in the early ‘60s — also in the archives.

The sketches also reflect the alterations and variations made through the years on Max Mara’s bestsellers, such as the robe-like Manuela coat launched in the ’90s, or the 101801, as well as the Teddy Bear Coat, a more recent success of the designer, and reinterpreted in new and fun ways.

“This is a luxury company, but we want to make things that will last, investments for life, real clothes for real women, aligned with the founder’s goal,” said Griffiths.