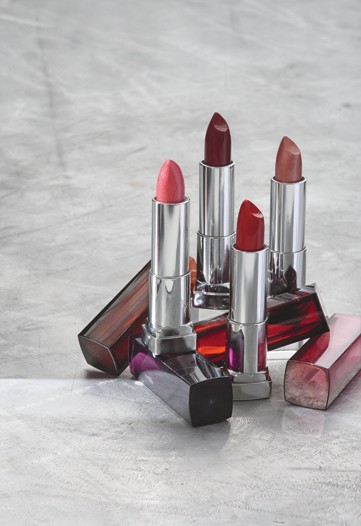 Maybelline New York is at an interesting moment in its brand life. Acquired by L’Oréal USA in 1995 and adopting its home city’s name in 2003, Maybelline New York has experienced a string of successes over the last five years, namely in the eye category, where it is the market leader in mascara. But in lipstick, Maybelline ranks fourth — a cool $10 million behind the third best-selling player in an otherwise near-even competition among Revlon, L’Oréal and Cover Girl — a spread that is reflective of what brand executives have, or have not, put into it.

“This is what happens when you bring innovation and excitement and a little bit of sexiness” into a category, said David Greenberg, president of Maybelline New York-Garnier. But in lip color, he said, “I don’t think we have brought the highest level of innovation there.”

“Over the last five years, our channel of distribution has been losing market share of lip color to specialty stores. It has been the opposite in eye. You drive the consumer to where the interest, excitement and innovation is, so we haven’t done our job,” said Greenberg, who was named to his post in August. He was senior vice president of human resources for L’Oréal USA prior to the change.

The answer, Greenberg said, is the firm’s biggest lipstick launch in years — Color Sensational, a 48-shade line complete with glosses, liners, a new color technology and a merchandising concept that has not yet been explored in mass. Color Sensational, which enters stores in July, may be the aphrodisiac the cosmetics category needs. Data from IRI show cosmetics sales ticked up 1 percent year-to-date to $671 million. For the most recent four weeks, sales dipped 1 percent. Lipstick sales fared among the worst in cosmetics, decreasing 9 percent to $334.4 million for the most recent 52-week period, excluding Wal-Mart. While it seems women have cooled to lipstick, Maybelline research found consumers still have a desire for it, but today she wants a new, modern take on lip color, from truer color payoff, to how it feels on lips, to how it is packaged. A lipstick’s shade, the research revealed, is the number-one driver of lip-color purchases.

“Consumers will never sacrifice that. It will influence them to buy from one brand to another,” said Serena Giovi, vice president marketing, Maybelline New York-Garnier.

Due to a new, innovative color dispersion system, the color seen on a Color Sensational lipstick bullet is what will transfer on the lips. “Color Sensational’s pigments are dispersed in a patented polymer and emollient blend. This blend saturates the pigment and allows the color to bloom,” said Debra Coleman Nally, director, R&D, L’Oréal USA. Creating a lipstick that feels soft on the lips was found to be the second most important lipstick trait. Color Sensational formulas address this concern by adding honey nectar.

In addition to the lipsticks, there are 12 shades of lip gloss — using the same technology — and 10 lip liners. Lip items fall into one of four shade families: red, pink, plum and natural, as consumers generally bucket themselves into one of these categories. Displays on the cosmetics wall group shade families together, so consumers can immediately deselect a family they know doesn’t work for them.

“Usually, lipsticks are all piled on top of one another,” said Greenberg. “This vehicle is much more consumer friendly. It allows her to navigate much more easily.”

Visuals at the cosmetics wall will feature models of different ethnicities and skin color within a certain shade family.

“This will align with what consumers will see in our print campaign,” said Steve Lutz, senior vice president of sales, Maybelline New York-Garnier.

Maybelline executives said retailers have signed on to carry all 48 shades, as well as lip glosses and lip liners. Even in this era of stockkeeping unit rationalization, Maybelline said retailers see Color Sensational as a proposition that could drive consumers to their stores.

An aggressive price point may help consumers return to mass for lipstick, too. Color Sensational will be priced at $7.49, while its other leading lip property, Moisture Extreme, will drop from $6.99 to $5.50 in the back half of the year. Glosses and liners will retail for $6.49. Maybelline executives would not comment on sales estimates for Color Sensational, but industry sources expect the brand to achieve between a 4 and 5 percent dollar share in its first six months, or about $30 million in sales.

Industry consultant Allan Mottus said Maybelline is being shrewd in its pricing, taking advantage of the gap left by value brands.

“The so-called value lines, like Jane and others, are really not doing well and [retailers] have too much stock. So they are trimming them,” Mottus said. Mottus also sees the pricing as an aggressive move against Cover Girl, which is going head to head with Maybelline in mascara with LashBlast.

“By dropping Moisture Extreme [which has roughly a three percent dollar share] to a $5 price point, they are being shrewd,” said Mottus, “because the hole in the drugstore area has been in the value segment. It is an indication that this pricing situation is going to be around for a while.”

Maybelline execs said they are managing through the sku rationalization programs going on everywhere from Wal-Mart to Walgreens.

“A lot we have managed ourselves. Fructis comes to mind,” said Lutz.

Greenberg added that his group manages its own portfolio and each year refreshes about 20 to 30 percent of sku’s.

But when it comes to Color Sensational, the breadth of sku’s is warranted.

“I could argue [that when consumers see one of two trays of lipstick] that is why the consumer is going to specialty,” said Lutz.

Color Sensational, which was created under the leadership of former president of Karen Fondu, who now helms L’Oréal Paris, also looks to be more than just a lip range.

“This will become the pillar of our color range. I’ll say it is a platform for expansion and it will receive all of the attention that goes along with that,” said Greenberg. “This is something you do once in your career. This will be our principal color brand 25 years from now.”