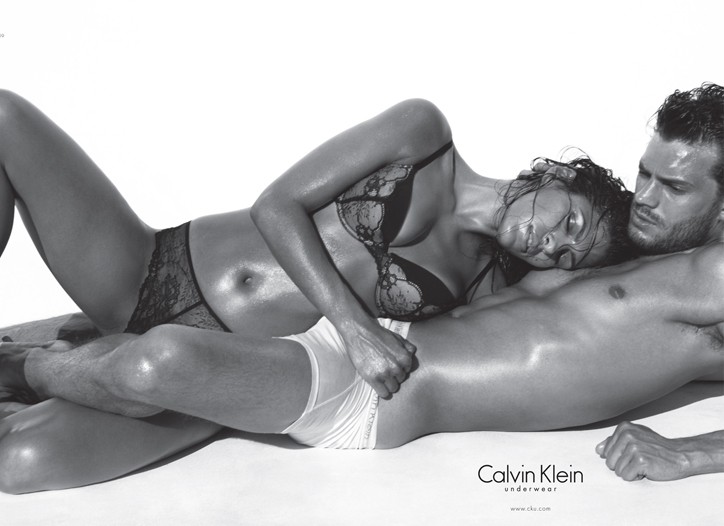 MORE EVA: Calvin Klein Jeans was singled out by the media on Tuesday for its provocative billboard at the corner of Houston and Lafayette streets in Manhattan, which show a seminude threesome. It’s the kind of media attention the brand thrives on, but soon it will be out with the old ads and in with the new — and for fall, the campaign includes actress Eva Mendes and Jamie Dornan. Steven Klein shot the duo in, true to form, racy new black-and-white images for Jeans and Calvin Klein Underwear. In addition to billboards, there will be Jeans ad inserts in the August issues of Lucky, Elle and GQ, and the September issue of Vanity Fair, as well as cover gatefolds in W, Nylon, Details and Interview. For women and men’s underwear, four-page ad units will run in In Style and GQ. Mendes has developed close ties to the company, adding the new Underwear and Jeans campaigns to her work in Calvin Klein Secret Obsession and the current Underwear campaign. Dornan has worked with the brand for years, previously alongside Natalia Vodianova in fall 2004 and Kate Moss in fall 2006. He’s also in the new Calvin Klein white label ads, with model Edita.

Meanwhile, more campaigns are set to roll out soon, including Calvin Klein Collection with model Jac, shot by David Sims on Long Island, New York. It’s the model’s first appearance in a Calvin Klein ad campaign and she also appeared exclusively in the last runway show. Fabien Baron, who is returning to Interview as the sole editorial director, was the creative director behind Collection, Jeans, Underwear and ck Calvin Klein, which has Jourdan Dunn in ads, shot by Craig McDean in New York. For fall, Calvin Klein will run a total of 1,080 ad pages, globally. — Amy Wicks

GETTING ATTENTION: Extending its media plan from traditional print to online and outdoor platforms, French leather goods brand Longchamp is courting passengers at Paris’ Charles de Gaulle Airport with its first-ever billboard. The image depicts Kate Moss lying suspended in the arms of six “An Officer and a Gentleman”-style male models in crisp white uniforms. Mert Alas and Marcus Piggott shot the campaign in a London studio. Using shadowy lighting, the faces of the men have been blacked out to leave a graphic line of white circular hats, while the final man holds Longchamp’s new Gatsby bag, which appears in various versions throughout the story. Other shots in the campaign see a red-lipped Moss and Daria Werbowy pulling mock salutes and marching steps against the backdrop of officers. Joining fashion’s trend for moving images, a “making of” short film by Sean Ash will be aired on the brand’s Web site. The campaign, set to roll out in July in glossies and on Web sites internationally, with no change in budgets versus the second half of 2008, will hit billboards in New York’s Times Square and central London for the holiday season. “The idea was to have a very rock ’n’ roll, sexy fashion attitude,” said Sophie Delafontaine, Longchamp’s artistic director. Military tailoring in the house’s fall clothing collection inspired the story, she said.

Meanwhile, Jean Cassegrain, Longchamp’s managing director, revealed the brand is gearing up to launch a European e-commerce site that will be open to France from July before rolling out to other countries. The brand already operates an e-commerce site for the U.S., launched in 2005, as well as a made-to-measure site where customers can customize the brand’s Pliage bag and one of its leather totes, opened in 2003. And work is already under way on Longchamp’s Madison Avenue location that will serve as the model for a new store concept for the brand, likely to be unveiled early next year. Longchamp also is gearing up to open stores in Barcelona and Düsseldorf, according to Cassegrain. — Katya Foreman

LOOK TO THE FUTURE: The global entertainment and media market as a whole, which includes advertising spending, is expected to post 2.7 percent average annual growth, to $1.6 trillion in 2013. According to PricewaterhouseCoopers’ Global Entertainment & Media Outlook 2009-2013 report, there will be a slowdown of 3.9 percent this year and a mere 0.4 advance next year, but from 2011, ad spending is expected to grow by 7.1 percent annually for the next two years. Much of that growth will come overseas, however: In the U.S., ad spending is expected to fall by 1.7 percent annually to $174 billion in 2013, from $189 billion in 2008. — A.W.