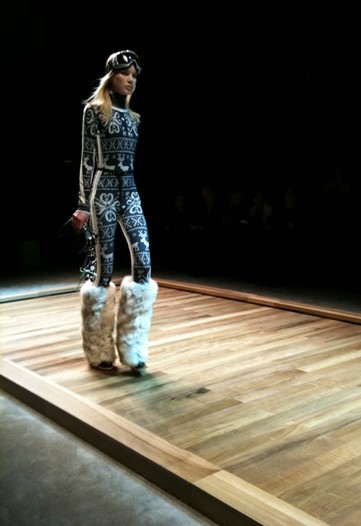 SHOW AND TELL: Judging by the overflow of tweets, TwitPics and now even videos (TwitVids or “Twideos”) from Milan and Paris, the fashion set is in the throes of a microblogging love affair. Indeed, beyond numerous written posts, editors, writers, stylists, buyers and bloggers documented the shows — plus meals, headaches, bodily sensations, anxieties, gossip, random thoughts — in real time, now with more photos and video clips. Here, the best tweets and photos from Europe. (And then there’s Joe Zee’s Twitter feed for videos — he seems be the trailblazer there.) — Nick Axelrod

Cathy Horyn of The New York Times: Freezing at Yohji. We’re under blankets. And now one learns that YY has sent home a model who didn’t want to show her nipples. Well, burrr

Franca Sozzani: So many designers, so few talented.

Coco Rocha (on her strong Paris showing): “Don’t call it a comeback…”

Stefano Gabbana: I like many fashion show from paris… :-)

Lorraine Candy of British Elle: Had tea with Isabel Marant. So stylish in that ‘I haven’t given my outfit any thought’ way I never manage. Jealous of her and her boots.

Armand Limnander of T, The New York Times Style Magazine, via The Moment: Lindsey (sic) Lohan just joined Courtney Love at Cavalli. Wouldn’t [it] be amazing if they started dating?

Rachel Zoe: Have no words for the Milan Gridlock just missed Prada and so carsick! 1 1/2 hours to go 10 miles..why does LA get such a bad rap???

GLAM FRANCE: Parlez-vous Glam? The well-funded fashion and women’s lifestyle-oriented ad network is expanding into France with a French language site and the appointment of two executives. General Manager of Glam Media France Jean-Pierre Levieux helped launch Microsoft’s MSN portal in the country in 1996. Orianne Garcia, a cofounder of French e-mail service Caramail and search engine Lokace, will be chief marketing officer. The appointments follow a fifth round of funding of $50 million in February, bringing the total cash raised by the company to $130 million. — Cate T. Corcoran

COMING ABOARD: People magazine has hired Pamela Edwards Christiani, formerly beauty editor at Essence, to be its new style and beauty editor, starting March 29. Christiani, a 10-year veteran of Essence, succeeds style editor Clarissa Cruz, who is leaving the magazine to write a book. Christiani is coming on board about a year after People expanded its beauty coverage by adding a “Beauty Watch” page, which highlights celebrity beauty trends, techniques as well as products. “I don’t think women can get enough of beauty, honestly, so I would hope we would do a little more,” said Christiani, who also hopes to offer more service stories in the style and beauty pages — “more takeaways for real life.” She will report to People executive editor Liz Sporkin. — N.A.

WATSON’S RETURN: Ann Watson is back on the retail scene. She started at Club Monaco on Monday as vice president of marketing and communications. Last year, she left Henri Bendel, where she was vice president and fashion director for three years. Before Bendel’s, she was senior director of retail for Starwood Hotels and Resorts, fashion director at Saks Fifth Avenue and in merchandising at Neiman Marcus. — David Moin