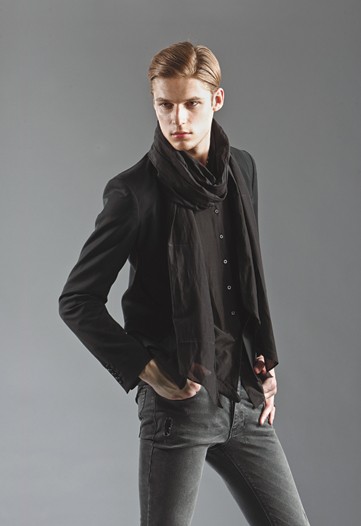 Borrowing from the boys is not exactly a revolutionary sartorial concept for most modern-day women. One need look no further than red-carpet shots of Nicole Kidman and Charlize Theron in Dior Homme suits to understand the undeniable appeal of men’s wear on a female physique. From boyfriend sweaters to little boy blazers, these items can often make an effortless transition into any girl’s wardrobe without veering into cross-dressing territory.

While women have long benefited from dipping into the opposite sex’s clothing pool in crafting a cool outfit, the reverse cannot be said for their male counterparts. And with good reason: frilly dresses and micro miniskirts are not typically thought of as testosterone-friendly. But recently, a confident contingent of guys has been making strides into the girls’ arena, seeking everything from basic T-shirts to trendy pieces, jewelry and accessories — all the while retaining masculinity. And with the support of a growing group of retailers and designers, they are making a case for raiding the women’s department.

For some among their ranks, the primary motivation is a question of fit. “I’m a rather small person, so a lot of the time, if I can’t find something that I would buy in a men’s section of a store…and if I want something and it’s cool enough and it doesn’t have too much darting, I’ll totally buy it [from the women’s side],” explains jewelry designer Eddie Borgo. He frequently mixes Alexander Wang cardigans and women’s blazers from thrift stores with white Hanes T-shirts and vintage Wranglers and Levis 517s. A recent purchase: a pair of Camilla Staerk black moccasins.

Borgo has a kindred spirit in a fashion executive who, as a result of his petite stature, gets creative in honing his simple, slim silhouette (though he prefers to remain anonymous about his girly clothing excursions). Though he likes lean men’s sweaters and blazers from Jil Sander and Prada, baggy, too-big men’s jeans don’t cut it. And so he has no problem looking to girls’ denim for his fit solution, specifically Helmut Lang’s cropped boyfriend style and the skinny cut from Uniqlo.

“I’m 5-foot-4…and there are limited collections I can buy,” he says. Denim wasn’t his first such foray: He also owns a light blue Uniqlo Windbreaker. “It has a very minimal design, the color was beautiful and I think that’s why I bought it,” he explains. “There’s no specific feminine design that makes me feel awkward.”

Size is not the only drive behind many of these intrepid male customers. A judicious mix of women’s clothes can lend a sleek, androgynous line often unattainable with exclusively men’s items.

Singh’s double-dipping doesn’t stop there: Jen Kao draped tops, Saint James striped girls’ Ts, a Carine Roitfeld-designed sweater for Lutz & Patmos and Tienda Ho tunics are all on heavy rotation in his closet, alongside men’s Rick Owens jackets, a Burberry Prorsum blazer and vintage rock T-shirts. True, Singh’s size 38 (“but I want to wear a 36”) upper-body build allows him to maneuver both sides of a department store with ease, but oftentimes the men’s territory doesn’t satisfy his specific tastes.

“I’m sure somebody will figure it out eventually, but why, when you can just go into a girls’ store and buy a wicked pair of Cheap Monday jeans?” says Singh. “I would have totally bought the men’s ones, but they didn’t have them in this [faded gray] color.”

Indeed, for style-minded fellows, men’s wear offerings can at times prove too dull. Take artist Yutaka Sone. By day, when working in his studio he sticks to a uniform of cutoff (often paint-splattered), nondescript jeans and a T-shirt. Off-duty, however, Sone likes to indulge his love of Chanel: He owns four women’s size-42 Chanel jackets (his first was pink, from the Chicago store) that he likes to pair with white jeans for, say, a show’s opening.

“Mr. Lagerfeld’s concept is for humans, so it’s OK,” says Sone, who is drawn to the house’s detailed craftsmanship. “The variety of design [in the marketplace] is very narrow for men. Women’s clothes are more flashy, colorful, joyful, so I love it.” Sone claims that no Chanel salesperson has batted an eye when he asks for a woman’s jacket, and it seems other retailers are not unfamiliar with such clients, either.

“From the get-go, when we first opened our store, we didn’t limit ourselves to categories that were geared only towards men,” says Eddy Chai, co-owner of downtown men’s haven Odin, which carries the likes of Engineered Garments, Rag & Bone and Common Projects. “We definitely went towards women’s jewelry designers. Obviously, you might not get that diamond flower pendant, but there’s definitely other kinds of jewelry that blurs the line between masculinity and femininity.” Case in point: Philip Crangi’s anchor, safety pin and feather charms and Johnny Ramli’s women’s multichain necklaces with key pendants.

One example of the latter came to Kalinsky in search of the women’s dhoti-style pant from Yves Saint Laurent’s fall 2008 collection.

“He’s just really interested in fashion and where he can identify something that he wants, I think he’s confident enough not to worry about whether it’s a men’s or women’s garment,” he says.

Apparently he is not alone: The drop-crotch harem pant has proved very popular at Helmut Lang. “For guys, we have three or four different styles, but they’re still very structured and not as aggressive. It’s very muted down and subtle,” says Zon Chu, a Helmut Lang salesman. “They totally serve their purpose if you want a more structured, clean look. But guys sometimes want the more overtly my-crotch-is-down-at-my-knees look.” In such instances, Chu points them toward the multiple women’s versions (which he himself sports). He also sells quite a few women’s blazers, jeans and jackets, all of which could pass for either side of the gender coin.

Having noted the trend, some designers are now turning out true unisex lines or even women’s-inspired men’s offerings. Borgo found his women’s costume jewelry line — with its punk-inspired conical motifs — so popular among men that he is launching a sterling silver collection for them next month. “I make a ring that looks like a bear trap, and I gave one to one of my friends and her boyfriend actually took her ring and fit it [for himself] so she needed to replace hers,” he laughs.

For her second design foray at Opening Ceremony, Chloë Sevigny put together a completely gender-neutral lineup of striped sweaters, tuxedo-style jackets and slouchy pants, which she presented during the recent London Fashion Week on both male and female models.

“The main thing is about sizing: We go from extra, extra, extra small to double XL. That’s the only difference. There’s nothing cut for a girl that’s not cut for a boy in exactly the same way,” says Sevigny. It’s quite a departure from her Liberty print-laden first collection. “A lot of my gay boyfriends and straight guy friends were frustrated that there was nothing for them [to wear], and a lot of my girlfriends wear oversize stuff, so it just seems like a fun way to approach it this time around.”

Her mind-set is in keeping with the rest of Opening Ceremony’s designer lineup. According to co-owner Humberto Leon, there is a reason women’s items, such as Acne’s Hex jeans and pieces from Antwerp, Belgium-based Stephan Schneider’s female line, are finding a male audience.

“I think people are moving away from a lot of the things that made women’s clothing specifically for women only: darting on dress shirts or suit jackets that have darts that only work for the female body,” says Leon. “People want that more boyfriend-jacket fit and then all of a sudden, that jacket can relate to both men and women.”

The current phenomenon of a man pulling from a woman’s closet isn’t without modern precedent. Both glam rock and grunge icons David Bowie and Kurt Cobain, respectively, donned dresses (or, in Bowie’s case, “man dresses” designed by Mr. Fish) when performing (and they have a contemporary kinsman in “American Idol” front-runner Adam Lambert, whose outré stylings have earned him a loyal following). But, while they were looking to provoke with obviously feminine gear, today’s gender benders are aiming for a seamless integration, one that is in many ways a product of a change in the fashionable male physique.

“The ideal male body has shifted. I think it started in recent years with Hedi Slimane, who was promoting a much narrower, slimmer body type, and it’s something rock stars have always promoted,” explains Andrew Bolton, curator of the Metropolitan Museum of Art’s Costume Institute. “It’s this idea of the heroin-chic body — very thin and pale and underfed. That’s a very hipster look at the moment and exacerbated by wearing women’s clothes, which are tighter.”

Indeed, for some of today’s rock stars, the tighter, the better.

“Whenever there was a brand that was for both men and women, like Roberto Cavalli, Steven [Tyler] would pick the female side, the female jeans. And they would be so tight and I’d tell him, ‘The crotch is too tight,’” recalls Elise Øverland, who styled and designed concert looks for the Aerosmith singer before launching her ready-to-wear line. “He just looks at clothes as clothes. And he’s not a gay man at all. It’s a freedom to the way he dresses.”

Whether such a fluid approach to shopping could ever take hold among a larger population, however, is questionable.

“I think unisex dressing is a bit of a myth in that, in the past, it has meant adapting male clothing [for women],” says Bolton.

“Being a stylist, you’re skewed. I’m not a normal male customer, I guess you could say,” says Singh. “It’s not going to be every guy. I mean, most guys don’t know how to get out of the house.”

“In fashion, never say never, but we are currently not seeing men shopping for trends within the women’s area,” adds Ken Downing, senior vice president and fashion director of Neiman Marcus.

Even Sevigny admits that some of the pieces in her new line might be more challenging than others. “The Fair Isle pants: I think you’d have to be a pretty brave boy to pull those off,” she says with a laugh.