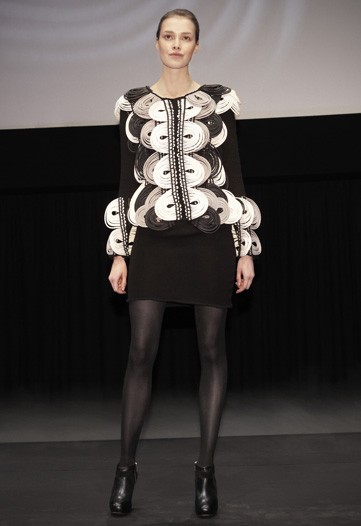 PRINTS CHARMING: Iconic Finnish brand Marimekko, famous for its graphic prints, presented its fall collection in Helsinki last week, powered by a fresh team of new hires from Central Saint Martins, the famous London fashion school. Virva Launo, a Finland-born 2009 M.A. graduate in accessories design, last fall was appointed creative director for the brand, and since has brought some of her schoolmates into the design studio. The collection included sculptural knitwear by Derek Lawlor, colorblocking by Chary Westberg and graphic work on textiles by Joanna Vanderpuije.

GREECE IS THE WORD: Film fanatic Jean Paul Gaultier will be in his element next week: He’s guest of honor at the 11th annual French Film Festival in Athens and was given carte blanche to share his favorites with the movie-going public in Greece, where French films enjoy an 8 percent market share. Gaultier’s selections include Jacques Becker’s “Falbalas,” which inspired him to become a couturier; Franco Zeffirelli’s “Callas Forever,” and an episode of Loic Prigent’s fashion documentary series, “The Day Before,” which tracks Gaultier in the nail-biting 36 hours before his designs hit the catwalk. The festival opens April 15, runs for 10 days and boasts such celebrity guests as Jean Reno and Jane Birkin.

JERSEY CITY: Vena Cava is entering the basics fray with Viva Vena, a lower-priced T-shirt collection launching for fall. Aware the jersey basics market is a competitive one, designers Sophie Buhai and Lisa Mayock have taken a printed approach to Viva, which includes organic cotton and jersey Ts, tanks and dresses, all produced in Los Angeles, done in Vena Cava’s signature photo collages and hand-drawn motifs. “We looked around and noticed that almost nothing was printed,” said Buhai, adding that everything is “priced so you didn’t have to think about it.” The collection retails for under $200 and will be in stores including Saks Fifth Avenue, Bergdorf Goodman, Barneys New York, Shopbop.com and Lagarconne.com in July.

SOMETHING ABOUT MARION: Woody Allen may bring an extra frisson of excitement to couture week. The American director is due to start filming his next movie in Paris on July 5, the first day of the high fashion shows. Allen hired French actress Marion Cotillard to play opposite Rachel McAdams and Owen Wilson — and French First Lady Carla Bruni-Sarkozy is rumored to be part of the cast as well. It looks like the Oscar-winning Cotillard has bewitched Hollywood. After her performance alongside Nicole Kidman and Penélope Cruz in “Nine,” she wrapped up Christopher Nolan’s thriller, “Inception,” scheduled for a U.S. and European release in July, and she will play in Steven Soderbergh’s next film, “Contagion.” But thanks to her companion Guillaume Canet, who gave her the lead role in his new film, “Little White Lies,” to be presented at the Cannes Film Festival next month, Cotillard is not forgetting her French audience.

CUE THE POLITICIANS: Ohio’s political heavyweights have entered the fracas between Hugo Boss and the Cleveland-area suit factory it plans to close later this month. Gov. Ted Strickland and Rep. Dennis Kucinich are slated to join a rally at the factory today ahead of a meeting between Boss and union management Thursday. It is the first meeting between the two parties since the company called off negotiations last December and revealed plans to close the facility. Last week, Hugo Boss, bowing to pressure from the National Labor Relations Board, said it would renew talks with the union.

SUPER TROOPERS: A select cadre of movie fans got to indulge any latent childhood fantasies Monday night when the Cinema Society, Ugg Australia and the Suffolk County Film Commission hosted a screening of “Paper Man” at the Crosby Street Hotel in Manhattan. The film follows a hack writer (Jeff Daniels) trying to complete a novel while struggling with a Peter Pan complex and an imaginary friend, Captain Excellent (a cape- and tights-clad Ryan Reynolds). He befriends and finds commiseration in a lonely teenage girl (Emma Stone).

As guests like Hope Davis, Mike Myers, Judd Hirsch and Carolyn Murphy nabbed popcorn before the screening’s start, Stone admitted she still finds herself embracing the playful side of life. “Almost any aspect of me is childish in some sense,” said the actress, clad in a blush-hued Stella McCartney frock. “Things I need to be responsible for — bills, those types of adult situations — I’m responsible about those. But other than that, the way I try to live my life is relatively childlike.” Her co-star, Daniels, concurred. “I think once you decide to spend your life being an actor, that inner child is never far away. As a profession it’s make believe — I pretend for a living,” he explained. “So I’m trying to find my outer adult, to be honest.”

HERE COMES CARMEN: Carmen Marc Valvo is the latest designer to jump into the bridal business. He has signed a licensing deal with Designer Bride Inc. to launch a collection of wedding dresses.

BIRTHDAY SUIT: To help mark its 60th birthday this year, Wolford plans to introduce a Swarovski crystal-adorned black floral-patterned lace bodysuit with matching thigh-length stockings. The numbered, limited edition ensemble will be sold for 995 euros, or about $1,344 at current exchange, starting in October in select Wolford stores around the globe.

BUILDING A DREAM: French furniture and jewelry designer Hervé van der Straeten had his first personal appearance Friday at Neiman Marcus Beverly Hills, which sells bold, hammered metal jewelry exclusively on the Left Coast. Some van der Straeten’s collectible furniture can be seen in the corner of the store dedicated to the designs of his partner, Bruno Frisoni, but it’s not for sale. But for those with a yen for the sculptural looks, the designer will show 15 new pieces at Pierre Bergé’s auction house in Brussels April 25 through late June. Van der Straeten said he also has plans for a coffee table book next year and “someday I would like to design a house.”