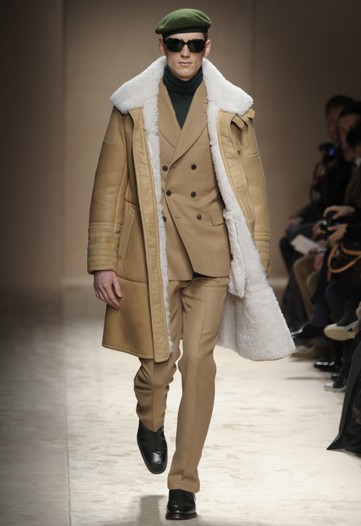 That said, pops of bold color across collections should help energize sales floors as men’s wear rebounds strongly at retail. Buyers said they had increased budgets in the double digits for the fall season.

“We came to Milan with a bit more wind behind our sails and have seen great clothes that reflect this mood for the upcoming fall season,” said Nickelson Wooster, men’s fashion director for Neiman Marcus and Bergdorf Goodman.

Among key items for the season, Wooster listed the fur-collared and camel coat; the dress boot; the Harris Tweed jacket; the banker’s stripe suit, and the hand-knit cashmere scarf.

“Men’s wear at Harrods is about to report double-digit growth for the fall-winter 2010 season. Our budgets are up, and we are planning major increases, particularly for our designer and tailoring brands,” said Jason Broderick, general merchandise manager for men’s wear.

Kevin Harter, vice president of fashion direction, men’s, at Bloomingdale’s, lauded the innovative presentations, such as the 3-D effects at Ermenegildo Zegna and Pringle of Scotland’s fashion film. “Part of selling clothes now is really capturing the customer, and the runways reflected this,” he said.

While the dapper dress suit and tie is having a moment, a relaxed sportswear feel dominated. Among the trends singled out by retailers were color; shearling outerwear; outdoors; military; slimmer tailored silhouettes, and tailored separates with a subtle Seventies feel.

“The fashion jacket is here, cut slightly shorter, with a shoulder. The [season’s] pant is a shorter, pleated, slightly carrot-style shape that’s looser at the top,” said Printemps’ de Lalun.

Referring to Sarah Burton’s second men’s wear collection for McQueen, George Yang, general merchandise manager of men’s for Lane Crawford, said, “She seamlessly continues to maintain the brand’s ethos both commercially, as the brand continues to flourish and exceed our business expectations in both Hong Kong and China, as well as aesthetically with her take on the house’s affiliation with historical British military regime.”

Here’s a roundup of trends and observations:

Sound off: “On the whole, designers in Milan have played it relatively safe for fall-winter 2011, choosing to focus on commerciality and accessibility.…With the exception of a few, the week has lacked the ‘wow’ factor.”

Hiroshi Kubo, men’s fashion director, Beams
Trends: “Classic remains a strong trend in Milan. Our favorite show was Albino for its soft-layered style in mohair and shrunken wool; it was both sophisticated and easy to wear. The line’s cobalt blue stood out from other Milan collections where I spotted a lot of wine colors. We noted a Swiss Army-inspired style, seen in melton wools and flannel coats in colors such as olive and beige.”

Sound off: “[Unlike] Beams, many Japanese buyers recently have opted to skip Milan men’s week and go directly to Paris. Looking to the future, I hope we can source more interesting young designers in Milan.”

Eric Jennings, vice president and men’s fashion director, Saks Fifth Avenue
Trends: “Fantastic knits, outerwear and shoes. Knits and sweaters were marled and marbled with lots of color giving them both depth and texture. Outerwear [was] packed with new technical fabrics, warmth, light weights and multifunctionality. The dress shoe is back, but not your father’s dress shoe. Multicolor and mixed media leathers make this season’s dress shoe relevant for a new generation. The highlight in Milan for me was seeing the strong comeback of suits and ties all done in new ways to keep things fresh and modern.”

Sound off: “2011 will be a great year for men’s fashion. Where the spring collections emphasized the sport coat and business casual dressing, the fall collections are bringing back the dressy suit and tie in full force.”

Tiziana Cardini, fashion director, La Rinascente
Trends: “Milan reconfirmed itself as a display window for very elegant, classic styles, but without that aspect of edginess. There was a mix between elegance and utilitarian style in general — it was practical elegance. There was a lot of volume — wide shoulders the dropped crotch in pants, and I found the presence of color very interesting.”

Sound off: “I really liked the eccentricity of the Prada show. Other shows I liked were Gucci, Jil Sander, Burberry, Bottega Veneta, Alexander McQueen and Umit Benan.”

Tom Kalenderian, executive vice president and general merchandise manager of men’s and Chelsea Passage for Barneys New York
Trends: “Coats were one of the strongest categories on the runway, and came in so many fabrics, including cloth, camel and loden. I loved Burberry’s buffalo checks. That collection was fun and full of volume. We also saw a lot of very, very beautiful sweaters, with legacy and historical references. They’re like heirloom pieces. This isn’t disposable fashion. It’s a good moment for investment pieces that you keep forever.”

Sound off: “What I thought was interesting is that luxury is now being considered fashion. And what we’re seeing are the tailors and more classic houses — Gianluca Isaia, Ermenegildo Zegna, Corneliani and Brunello Cucinelli — are showing like fashion houses and supplying a lot of the energy, great ideas and high style in Milan.”