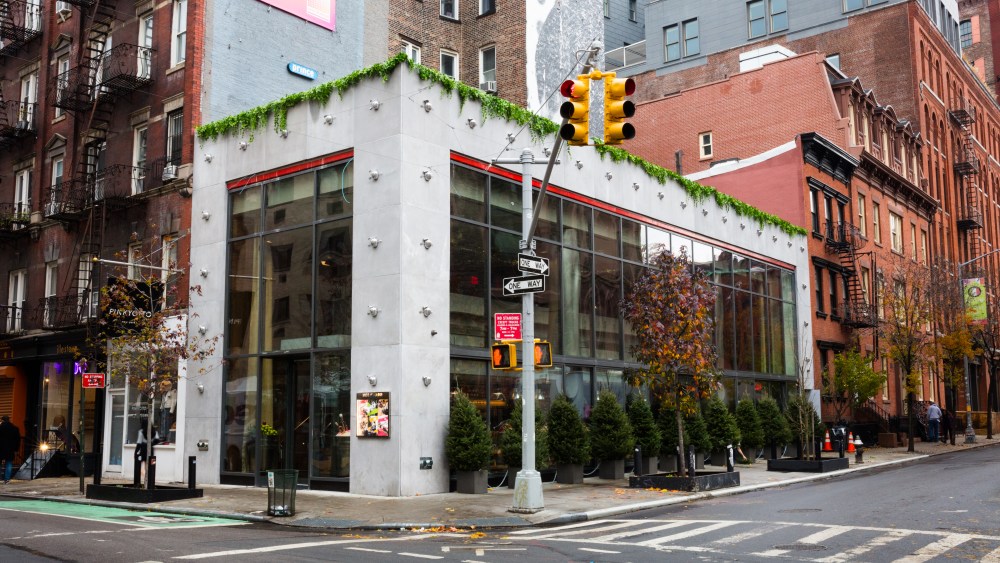 Sometimes, paradise is built from a parking lot and not the other way around.

Restaurateur Claude Louzon has opened Miss Paradis in New York’s SoHo, the first Stateside outpost of his Parisian dining concept Le Paradis du Fruit. Working with his longtime acquaintance Philippe Starck, who designed Miss Ko for Louzon in Paris, the pair built the multilevel space from the ground up on a corner of Prince Street that was formerly a paved lot.

“Philippe Starck loved my story because it’s a simple story, and Philippe Starck is a very simple guy,” Claude remarked on his synergy with the designer.

Louzon entered the dining world 35 years ago with Le Paradis du Fruit. The idea to open a juice and smoothie concept was born out of his extensive travels, during which his diet was a mix of fresh fruits and juices. It may be commonplace to have a smoothie as a meal these days but back then, it hadn’t yet entered the mainstream. “Thirty-five years ago it was crazy to open a restaurant like that, like we can see now in New York and everywhere,” Claude said.

The vision for Miss Paradis is to be platform for both art and healthful food, and the restaurant represents a collaborative effort from all directions. The kitchen is headed up by two chefs with differing culinary backgrounds, Adir Cohen and Alejandro German, who created a plant-driven menu with Mediterranean influences. Fresh juices, smoothies and a selection of natural wines — with a particular focus on rosé — lead the beverage program.

“The whole concept here is to give the space to the other, and really try working together as opposed to just be very individualistic,” explained Julie Louzon, Claude’s daughter. “Even Philippe Starck wanted this space to become a platform for the arts and give the opportunity to other artists to shine, to be present — and this is the same for in the kitchen.”

Those artistic touches include a winding glass chandelier by Aristide Najean in the upper dining room, illustrations by Chad Wys on the underside of the restaurant’s awning, and soaring pillars, designed by Suzanne Couture to resemble the trunks of apple trees, imagery that extends to the large apple sculpture perched on the building’s roof.

“It’s like the temptation of eating and at the same time being conscious of what you put inside your body,” Julie explained of the apple, which is the restaurant’s logo. “Also we’re in the Big Apple.” There’s also a church across from the restaurant on Mulberry Street, which adds a whole other set of apple metaphors into the mix.

While based in Paris, the Louzon family has resided in the area for many years and Miss Paradis represents an extension of their guiding ethos.

“New York is all about accepting others and this melting pot,” Julie said. “We really wanted to transform this place as a living experience.”