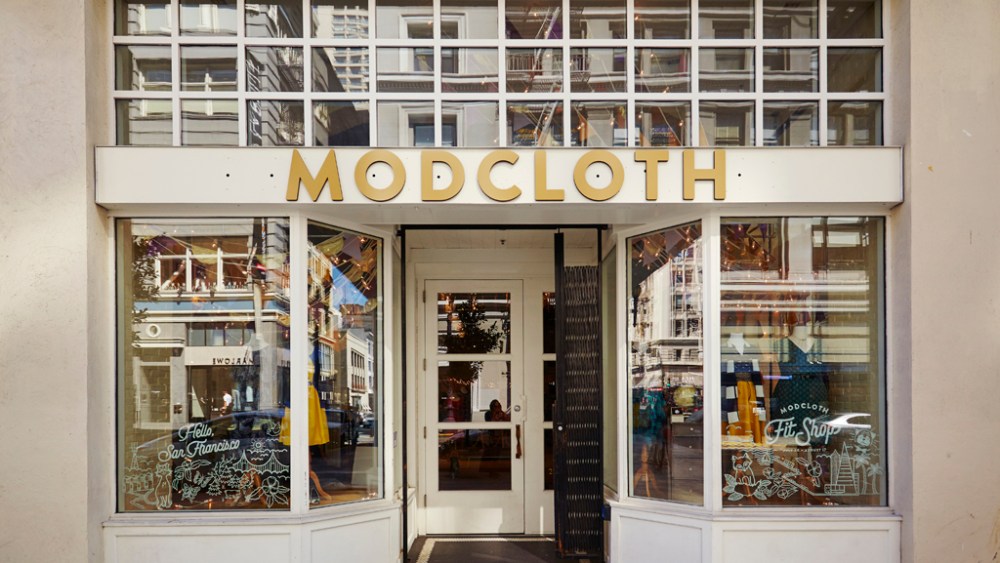 New ModCloth chief executive officer Matt Kaness’ “year of experimentation” is about to get a lot more visible.

After 13 years, the cutesy vintage-inspired e-tailer will this week launch its first full line of branded apparel. Featuring dresses, skirts, tops and outerwear at $34.99 to $149.99, the inaugural ModCloth offering totals 98 pieces in sizes from XS to 4X.

In keeping with the experimental mind-set, the fall offering is being revealed at a three-week, 2,250-square-foot “fit shop” near San Francisco’s Union Square, where customers can try on and buy clothes that will be shipped to them within two days.

This is a big step for the San Francisco-based company, which, until now, has sold apparel from outside vendors along with the occasional in-house capsule collection. These moves aren’t a total surprise — the retro-minded brand has often led the charge in innovative retail concepts like crowdsourcing and social selling — but this signifies a fresh start after a turbulent 2014.

Kaness began his tenure in January after ceo Eric Koger, who founded the company with wife and chief creative officer Susan Koger, said he was stepping down. ModCloth had laid off an estimated 120 of its more than 500 employees in all three of its offices (others are in Los Angeles and Pittsburgh). In a letter to the company revealing the news, Koger referenced challenges in taking the business off-line and scaling the sourcing and production of merchandise.

“But to their credit,” said Goldman, who became an investor in ModCloth in 2008, “[Susan and Eric] and the board started to see the need for executives with deep retail experience and knowledge of the issues at this stage of growth” — namely, Kaness.

As the former chief strategy officer at Urban Outfitters Inc., Kaness brought operations experience, merchandising and marketing strategy and ability to scale both online and off-line, Goldman said. The hope with Kaness is that he can streamline operations while growing the company.

Kaness was intrigued by ModCloth’s potential; when the job came along, he said, it was like hitting the professional lottery. “We have an amazing concept, a great customer,” he insisted. He also said that in the past year, while growth was slowed due to an overall industry downturn, ModCloth maintained, if not grew, its market share.

This June, ModCloth received an additional $15 million from its investors, bringing the total raised to date to almost $80 million. To Kaness, this represents optimism for the future of the business and will help him move faster to present ModCloth to a broader audience. Previous investors include Accel Partners, First Round, Jeff Fluhr, Floodgate, Great Oaks Venture Capital and Harrison Metal Capital.

“The fit shop is an incubator for what, until this year, had been an online-only company,” he said. “We’re taking advantage of our heritage but going faster to engage our customer on- and off-line.” He refers to ModCloth as a digital-first, multichannel retailer, which is a bit of a shift.

Even though the company started in 2002 (hence the idea of “heritage”), Kaness considers ModCloth an “adolescent,” suggesting that, perhaps, those growing pains were to be expected. “It’s still growing up — a lot of the opus is unwritten.”

While expanding the brand, he hopes to maintain the mind-set of a start-up indefinitely — meaning, for example, responding to what’s going in the fit shop by changing out samples quickly, or using data gleaned online to inform the product offering in brick-and-mortar, and vice versa. This embrace of “showroom-ing” could lead to permanent fit shops — a concept seen from brands including Warby Parker, Indochino and Bonobos.

Much of his plan for growing ModCloth’s customer base — or “community” — includes utilizing what’s already there. ModCloth has supported tenets like body positivity and acceptance, and, said Goldman, “they were way ahead of the market on this.”

In 2014, a ModCloth-commissioned study found that 80 percent of plus-size women would spend more on clothing if they could find flattering options; size 16 and above is now its fastest-growing category and customers who buy sizes 16 and above place 20 percent more orders than average. The brand regularly uses customers, rather than models, to show its clothes. In April, it featured a transgender customer in its monthly Casting Call for All series.

Although ModCloth was early to adopt innovative concepts that are now more familiar, it might have lost an opportunity to get recognition. Kaness hopes to change that by being a bit “louder and prouder” about these accomplishments, while continuing to experiment and innovate the customer experience. “Our culture here is rather humble,” he said. “I attribute that to Susan Koger, who’s achieved amazing things — but you don’t see her out doing book tours.”

This might be a subtle reference to Nasty Gal founder Sophia Amoruso, who released a memoir about the nine-year-old women’s apparel e-tailer in 2014 and who, like Koger, started by selling secondhand clothing online. Amoruso recently stepped down from the title of ceo after layoffs in 2014, despite $65 million in funding and buzzed-about growth.

The parallels are obvious, but as retail analyst Brian Kelly sees it, the story line makes sense.

“They came out as on online pure-play, with a very specific point of view, and they’ve reached the next level,” Kelly said of ModCloth. “There’s only so much market you can drive, but after you’ve built an obsessed core, how do you grow that?”

Kaness doesn’t have much to say about 2014. “I’m aware of what transpired and what was written about it, but what I found when I got here was a passionate, entrepreneurial team that saw the same opportunity I did.”

Goldman said ModCloth has made some adjustments, but that innovation “is in their DNA. I think the strong loyalty of their customer base presents an opportunity to quickly make up that ground and stay in the lead.”

That customer base is thanks to Koger’s early ethos of integrating social media into company decisions. When Goldman met the Kogers in 2007, ModCloth was the first company he’d seen that understood the power of social influence across buying, merchandising, editorial, referral marketing and customer support. “You could really see and measure the impact of what they were doing on social networking,” he said, from buying decisions and size-mix purchasing to repeat purchase rates.

Thus, albeit “experimental,” the projects aren’t entirely without precedent. ModCloth has used cues — from “hearts” to outright voting — through “Be the Buyer” to guide which pieces go into production. When designing the branded line, ModCloth designers turned to its Style Gallery, in which customers post selfies wearing ModCloth, to identify unofficial muses. They approached the inaugural pieces as a sort of “best of” ModCloth, with the most popular details, prints and silhouettes.

But — key to breaking through its specific point of view — Kaness describes the branded line as “more shoppable,” acknowledging that, while ModCloth’s unique aesthetic sets it apart from potential competitors, it also stands to limit its relevance to a larger audience. Thus, there are still plaids and florals, pocketed skirts and fit-and-flare dresses, but the assortment is a bit broader, and the silhouettes a bit more modern.

And ModCloth modeled its fit shop after a three-day pop-up it held in the lobby of its Los Angeles office in April, for which 5,000 signed up before registration had to be closed. The popularity of that event, Kaness says, emboldened him to think bigger.

If 2015 is the year of experimentation, Goldman calls 2016 “the year of expansion.” There are plans to expand distribution of the ModCloth line to multibrand e-tailers and department stores and to Canada, the U.K., Australia and Japan. “As we progress,” Kaness said, “our customer is everywhere. It’s really on us to meet our customer where she shops.”

The company, which has more than 350 employees, is again expanding internally as well, with “dozens” of open positions in marketing, engineering and product design.

“It’s a fun time to be in the industry,” Kaness said. “The platform we have is exactly where the world is moving and we have permission to expand and take risks.”