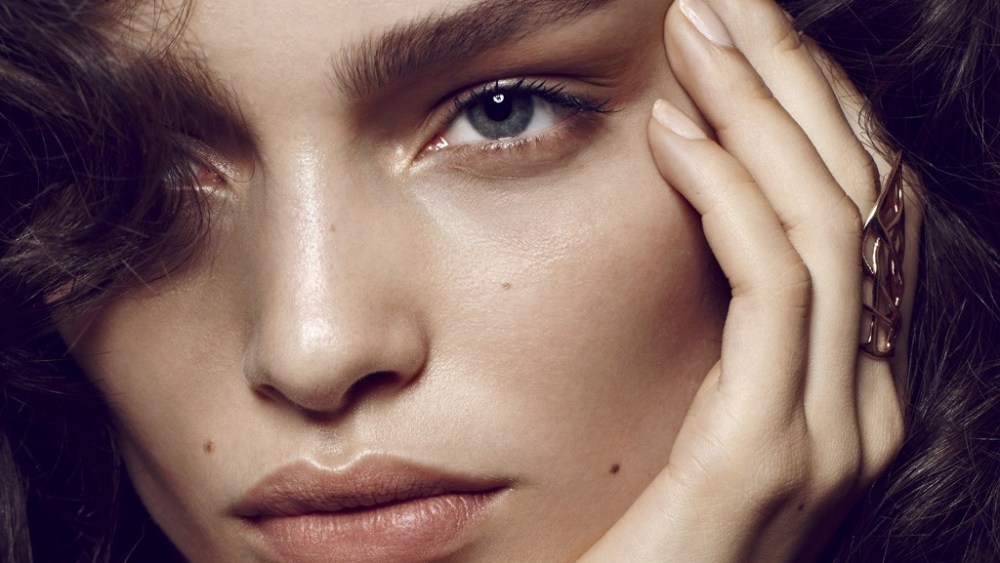 “Sometimes people say I look like if Angelina Jolie and Miranda Kerr had a baby,” said Luma Grothe (pronounced Gro-tay), the 20-year-old model from Joinville, a city in the Southern region of Brazil. If Grothe doesn’t look like your typical Brazilian — her eyes are blue, her skin slightly pale — it’s because she’s German, Japanese and African, a mix that set her apart physically from her darker-skinned Brazilian classmates while growing up.

Grothe, who is repped by One Management, might be recognizable as the face of Dsquared2’s spring campaign — stroll past the intersection of West Broadway and Spring Street in New York’s SoHo and there’s a 10-foot-high poster of her plastered on what will soon be the brand’s first U.S. store. Editorialwise, she’s been featured in multiple international editions of Vogue, Glamour and Elle and also nabbed the covers of Grey Magazine, Vs. Magazine and Vogue Italia’s beauty supplement, in addition to look books for Barneys New York, J. Crew and Urban Outfitters. As for runway, she walked the fall shows for Jeremy Scott, Julien Macdonald, Dsquared2, Cushnie et Ochs, Nicole Miller and more. It’s hard for Grothe to decide which she enjoys more, print or runway. “Image is so powerful, and I really like seeing the results of photo shoots,” she said. “But the catwalk is all about the moment. Everybody’s looking at you.”

The 5-foot, 9-inch model has lived in New York City for a year with her boyfriend and their French bulldog, Bark Obama, and when she’s not busy with work, she has a soft spot for musicals. “I went to ‘Mamma Mia,’ which sounds cheesy, but it’s really cool. ‘Book of Mormon’ was great, too.”

WWD: How did you start modeling?
Luma Grothe: My best friend was being really annoying about this modeling competition in the south of Brazil. He was like, ‘You’re superskinny, just go there. You’re gonna win it.’ I didn’t even wanna go. I was studying and doing well in school. I was 16 at the time. I guess he convinced me to go, and it was good. I didn’t win, but people saw me there and then somehow I got signed with this agency. I started modeling, and it was going so well that I had to stop school. So I still have one year to finish. I’ll go back and finish, definitely.

WWD: Have you settled into New York or was it an adjustment?
L.G.: I have an apartment here uptown, so I’m pretty settled. I have a puppy — a French bulldog. He’s, like, seven months now. I was living by myself, and then my boyfriend moved in a few months ago. It’s so different in New York [from Brazil], but it’s nice that I can have both. Sometimes I work in Brazil, so I can still have the sunny weather and the seaside, but I do love New York. I think everywhere I just really like the people because they’re so different. In London, everybody’s very friendly. In New York, everybody’s looking for their dream. In Brazil, everybody’s chilling and easygoing. I love that.

WWD: What was it like growing up in Brazil?
L.G.: I have a brother and sister who are older than me. Growing up with them was so much fun. Brazil is growing now, but before, we didn’t have a lot of technology so [all we had] were our jokes — we were always all outside, running around, getting dirty. It was really healthy and nice growing up there. I’m very close with my family. I miss them all the time.

WWD: But you moved to London for work when you were 16, right?
L.G.: I went to London when I was 16-and-a-half for work, and I didn’t speak any English. It was embarrassing. It was hard. My bookers, they said if I wanted to stay in London I had to learn. I had to watch a lot of [English] TV and ask my friends, “What does this mean? What does that mean?” I made so many friends in London and they were from Russia, Poland, everywhere in Europe — I got different accents from them.

WWD: How did your family feel about you leaving Brazil for work at such a young age?
L.G.: I remember my mom saying that children — you have to [let them grow as they want to], not for yourself. She said your kid has to go wherever your kid wants to go; you can’t keep your kid in the house. She said whatever makes me happy — if traveling and learning new things will make me happy — then I should definitely do it.

WWD: When you were younger, did becoming a model ever cross your mind?
L.G.: I think in high school people always thought I was different than the others. There is this Brazilian type that is long straight hair, darker skin, kind of native looking, but I was always super different. People didn’t think I should be a model, they just thought I was different looking. I’m German, African and Japanese. My dad is a mix of German and Japanese and African, and my mom is German.

WWD: You’ve been modeling for about four years now. Has there ever been a moment where you felt like you’d made it?
L.G.: I think that modeling is — you never know you’re ready. You just never know. You just go with the flow. My clients always called me back to work again with them, and I was very happy about that. I definitely take it seriously as a career. I’m a very creative person, though — I like to do other stuff as well. I want to keep studying. I like making videos. I would love to be behind the scenes of cinema in the future, as a director or producer or something like that. I just really love it.

WWD: Were you happy when you heard you nabbed Dsquared2’s spring campaign?
L.G.: Apparently they started looking through girls on their catwalk, and they stopped on a picture of me and said, “This one.” That was it. I was very lucky. It’s not like I get superexcited, but what I like about it is that other people get so inspired. I have girls, normal girls e-mailing me all the time that I give them inspiration. That’s what I like about it.

WWD: What do you think you’ve gained the most from all of your modeling experience?
L.G.: It’s almost like a college of life. You learn how to live. You learn everything, how to be by yourself. You don’t have your parents doing things for you. You become an adult in one day. I remember the first time I went to the supermarket by myself to buy my food, and I remember I was crying. I was like, I don’t know what I’m supposed to buy! I had never done this before. You go from being taken care of to taking care of yourself.

WWD: What are some of the most challenging parts of this career?
L.G.: I don’t feel like it’s hard anymore. I’ve been through so much. In the first two years, I worked so much for free, I didn’t have money at all. I was just living off pocket money that the agency gives you — like $100 a week or something. For me that was fine, but it was hard. So after doing so many good jobs, now I can really have a better life. I think all the hard parts are gone. I’m very settled now.

WWD: What’s the weirdest thing you’ve ever had to do on a photo shoot?
L.G.: For ID Magazine online — it was a few years ago — I had these weird wigs on. And they had these animals — what is the name, they have a shell? Snails. I had to hold them and they were alive. I did not like them. Everybody was like, “Don’t worry, they’re nice.” I was like, “They are snails, how can they be nice?”

WWD: You’ve worked with some of fashion’s top photographers: Testino, von Unwerth, Mert and Alas…
L.G.: Yeah, I worked with Mario Testino and Mert Alas and Marcus Piggott — and Ellen [von Unwerth] was one of my favorites. She shot the Vs. Magazine cover. It was with Hailey Clauson, and we got along so well. Ellen is so much fun; she’s like a kid, it’s almost like she’s 17 years old and she’s falling in love. All the girls on that shoot were really nice and we had so much fun. I think these photographers are on the top because they’re so nice and so good at what they do. Otherwise they wouldn’t be there. My goal is to shoot with Steven Meisel one day.

WWD: What are some of your other goals?
L.G.: So many. I definitely dream about building my own house somewhere — like maybe Long Island or somewhere more near nature. Designing it the way I want it — this is one of my goals. And I want to travel places that I haven’t been yet. I had two passports full of stamps and I had to switch passports and get a new one. Before that I [hadn’t really traveled,] I was just in Brazil.

WWD: Are there any aspects of the industry you’d like to see changed?
L.G.: I lived with girls who didn’t eat, and that was pretty sad. I think you first need to be healthy. It’s important that the model is healthy, for herself but also so that people can see what is really beautiful. Sick isn’t beautiful. But that’s changing slowly, and I’m really happy about it.