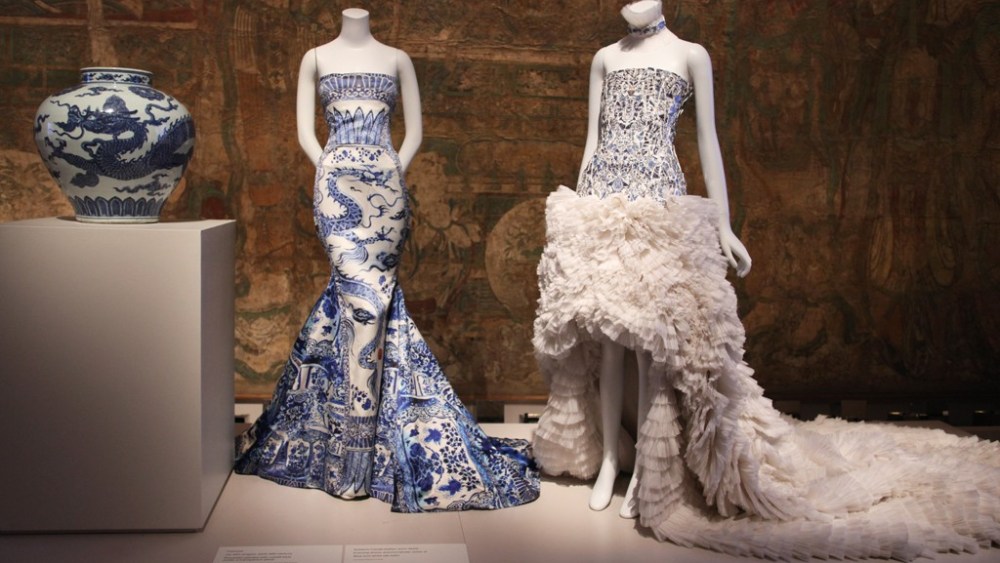 NEW YORK — About an hour after sunrise, some Eastern-thinking members of the fashion crowd were up and at ’em Monday at the Metropolitan Museum of Art’s press preview for “China: Through the Looking Glass.”

The hybrid show of fashion, film and art will be staged in the Met’s Chinese Galleries and the Anna Wintour Costume Center from May 7 through Aug. 16. Through the juxtaposition of 130 couture and avant-garde ready-to-wear pieces with Chinese costumes, paintings, films, porcelains and other art, visitors will learn how China has sparked fashionable imaginations for centuries. Lest any attendees worry that the upcoming show would be steeped solely in China’s past, an 18th-century Chinese festival robe will be paired with a striking evening dress from Tom Ford’s fall 2004 Yves Saint Laurent collection and a 15th-century “Jar With Dragon” will be displayed with a similarly patterned 2005 Roberto Cavalli evening dress.

To illustrate how films affect our image of China and to underline the importance of cinema as a means of understanding the richness of the Asian giant’s history, Andrew Bolton, curator of the Costume Institute, on Monday showed video clips of “Raise the Red Lantern,” “Crouching Tiger, Hidden Dragon,” “Farewell My Concubine” and “In the Mood for Love.”

Bolton and his Costume Institute team collaborated with the Department of Asian Art to imagine the upcoming show, which will encompass fashion from the 1700s to today through an assortment of interplays. Styles will be displayed opposite decorative arts from Imperial China in the Chinese Galleries. “Women of Style” vignettes for Oei Huilan, Soong May-ling and Empress Dowager Cixi will be on view in the Anna Wintour Costume Center’s Lizzie and Jonathan Tisch Gallery. The Astor Court will house costumes worn by Chinese opera star Mei Lanfang, the inspiration for John Galliano’s spring 2003 Christian Dior couture collection. Sarah Burton for Alexander McQueen, Jean Paul Gaultier, Marc Jacobs for Louis Vuitton, Dries Van Noten, Giambattista Valli, Jason Wu, Cristóbal Balenciaga, Christian Dior and Coco Chanel are among the other designers who will be represented.

Yahoo has signed on as the exhibition’s lead sponsor with additional support provided by Condé Nast and what The Met described as “several generous Chinese donors.”

In celebration of the exhibition’s opening, Chou will be the honorary chair of the Costume Institute Benefit on May 4. This year’s cochairs are Jennifer Lawrence, Gong Li, Marissa Mayer, Wendi Murdoch and Anna Wintour.

Inspired partially by the topsy-turvy world of Lewis Carroll’s “Alice’s Adventures in Wonderland,” the Met show will depict its own fictional universe, albeit one with precise historical and modern references. A series of mirrored reflections will be set up to zero in on Imperial China, the Republic of China and the People’s Republic of China, Bolton said. The show will “reveal itself through a series of narrative spaces that are constantly being reorganized by free association. As if by magic, the physical distance between East and West, which often seems monolithic and diametrically opposed, diminishes,” he added.

Addressing a crowd that included Silas Chou, Wendi Deng and Thom Browne, the exhibition’s artistic director, Oscar-nominated director Wong Kar-wai said he was honored that some of his work, as well as those of his peers, had inspired some of the fashion that will be featured. Wearing his signature sunglasses, he gave attendees much to ponder. Noting that the show’s Chinese title is “Mirror, Water, Flower, Moon,” Wong said those are recurring symbols in Chinese art that represent projection, reflection and fascination. As Buddhist scripture said, “In the sky, there’s no distinction from East and West. People make these distinctions in their minds and believe them to be true.”