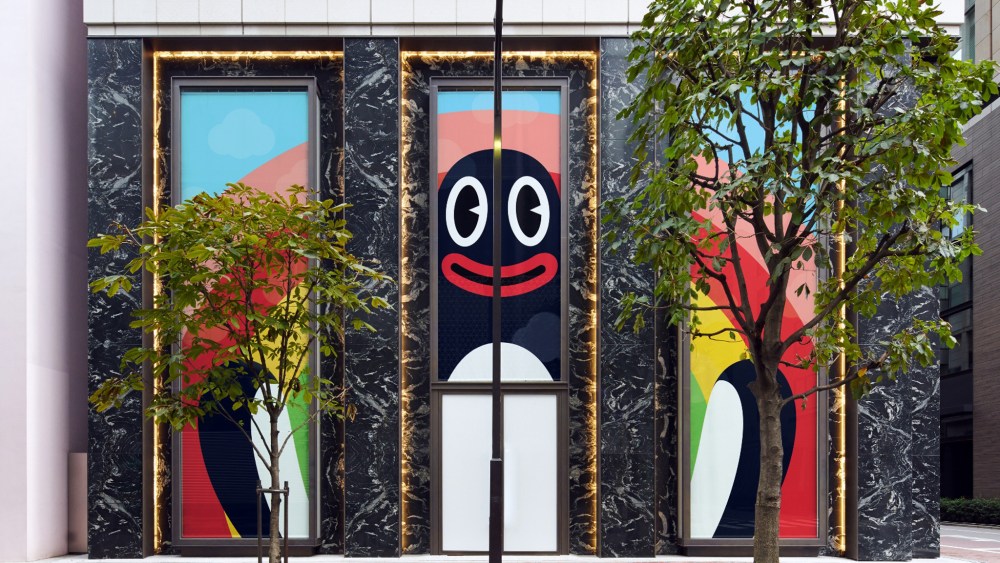 MILAN – Moncler is launching a capsule collection with Los Angeles-based artist duo Friends With You to help mark the opening of the luxury brand’s flagship in Tokyo’s Ginza district.

The collection will be available exclusively at the Tokyo store on the day the store opens, Oct. 24, as well as on Oct. 25 and will then be rolled out to all Moncler units globally in June 2016, with the fall-winter season.

Friends With You was founded by American Samuel Albert Borkson and Arturo Sandoval 3rd, who hails from Cuba. They are known for their large installations; their “soft statues;” their recurring rainbow motif, and the use of comic signs and references to easily identifiable pop icons, ranging from Snowman, Happy Virus and Cloudy to Look Who’s Talking and Mr. TTT. Graphic clouds, smiles or eyebrows appear on Moncler’s men’s and women’s T-shirts or on the colorful lacquered nylon of the puffer jackets, as well as sneakers and bags.

“We worked excellently with them, they have an ironic touch, and a strong attitude,” Remo Ruffini, chairman and chief executive officer of Moncler, said in an exclusive interview of the partnership with the artists. “It’s a very original collection.”

Ruffini pointed out that the events at the Ginza flagship are meant “for the final consumer,” whom the brand wants to engage “in a dialogue.”

Moncler is not new to such collaborations, having worked with Pharrell Williams, for example. “It’s a way to create new stimuli, and we are interested in the interpretation of the jacket from people outside our world,” said Ruffini. “They bring emotion, originality and great strength.”

Large, almost 10-foot-high inflatable sculptures accompanied by other smaller ones in resin portraying the various Friends With You icons will take over the flagship, where the artists are expected for a book signing on Oct. 24, and to further personalize the pieces. Other events include a real Festival of Art and Creativity, with a celebrity shoot by Terry Richardson and a DJ set from Virgil Abloh.

Selling the capsule first for only two days in Tokyo is “a way to thank Japan,” explained Ruffini.

“This is the first true flagship after that of Paris, in line with our strategy to open important stores in the big capitals,” observed the executive. France and Japan are historically relevant, he added. The latter accounts for around 15 percent of Moncler’s business, with 24 stores, including shop-in-shops, said Ruffini.

“It was not easy to find a location. This is a freestanding building,” he said, which enables the company to fully represent its strategy and products to the consumers, who in Japan still perceive the brand as hinging on “the basic down jacket.”

The Ginza boutique, covering 6,048 square feet over two floors, was designed by Moncler’s go-to Parisian architects Gilles & Boissier. Moncler already counts stores in the main districts of Aoyama, Shibuya and Shinjuku as well as other Tokyo locations and the country’s main cities.

Ruffini said Ginza is living “a great boom,” with tourists flocking from China and Korea, also benefiting from “a more interesting local currency.”